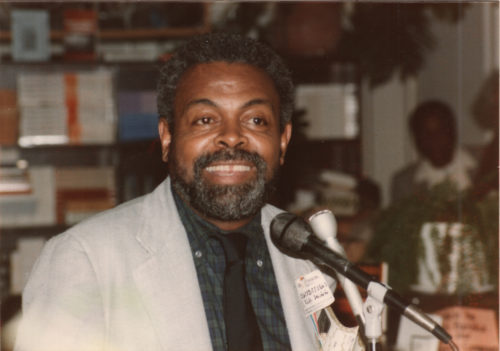 An introduction to his LRS writings
by Greg Morozumi

AMIRI BARAKA felt it was important to be in constant political and cultural growth and transformation throughout one’s life —to change internally and adjust to external conditions. A dialectical approach to political development. But always to remain true to one’s principles and to have the people’s interests at heart.

Baraka’s writing naturally reflected his own transformations or transitions which were also the ideological changes occurring within the BLM and other national movements. When the Congress of Afrikan People (CAP), a revolutionary Black nationalist network and then organization, began to examine Third World revolutions around the world, as well as examine class conflict within the U.S. Afro American populace itself, the transition to Marxist-Leninism seemed only logical. (In fact many Third World organizations in the U.S. began that same process of self-reevaluation, particularly those groups which were the base of LRS, (CAP/ RCL, IWK, ATM).

It was not a contradiction to declare oneself an internationalist but to remain primarily focused on the plight of Afro American people. (Like Malcolm, Baraka preferred the designation “Afro American” over “African American” to declare a distinct nationality or nation, which he insisted was not a matter of semantics). In fact, there could be no separation between internationalism and revolutionary nationalism if one was truly interested in revolution.

Amiri Baraka’s poetry, plays, essays — especially those reprinted in the pages of UNITY newspaper, FORWARD journal, and BLACK NATION magazine reflected a decidedly Marxist vocabulary and bent, but always with a national consciousness present. He thus changed the feeling and function of American poetry and language as a conscientious challenge to  mainstream letters. The language, its constructs, its vocabulary, even diction reveal ones ideological leanings. But the content, he maintained, is primary, and he sought to emphasize the continuum of class struggle and to distinguish class allegiances throughout the history of Afro American writing … even organizing forums to debate the direction and priorities of Black writers.This was done through his survey of Black Music as well (Baraka being one of the first Black critics of “Jazz,” Black Music(!). Class struggle in music — not just the commercial aspect of the music business but the music’s content, its reflection and expression of the Black experience.

Amiri Baraka’s writings in Unity Press record an advanced level of consciousness which a significant segment of that maturing 60s generation was developing from the engagement in struggle with the changing conditions in the real world. These writings mainly span from the late 70s to the late 80s through essays, poetry, reviews…the challenge of ideas, class analysis, polemics within left circles, seeking honesty and truth and advocating socialism through principled unity and struggle.

for currently available poems that appeared in or were written for LRS publications click here. More to come.