ATLANTA — Throughout the Rev­erend Jesse Jackson’s presidential cam­paign, one theme resounds with great urgency — voting rights. “I am not just fighting for voter registration,” says Jackson, “but for enforcement of the Voting Rights Act. … It is the key to empowering the disenfranchised and that is the key to a Democratic victory in 1984.

”It is a timely message. Over 200,000 new Black voters were registered in the South in 1983. Black leaders hope to add two million new voters, raising the Black electorate to 11 million in 1984. 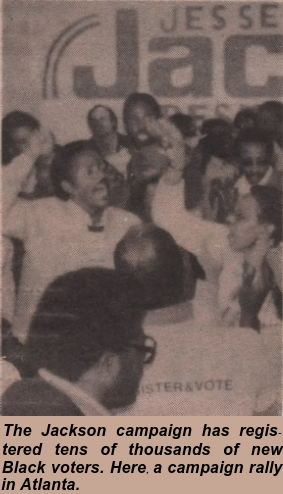 Jackson’s candidacy has brought hundreds of thousands of Afro- Americans into the electoral arena and stimulated high levels of voter turnout. Afro-American people have declared that a new day has come — a day when their political rights must be respected!

Ever since the Reconstruction Act of 1867, which granted Afro- Americans in the South the right to vote, they have faced violence and discrimination aimed at denying them representation and political power. Thus, the struggle for greater democracy for Afro-Americans is bound up with the struggle for self- determination, the right to decide the political future of the Black Nation.Until the 1940’s, the Democratic Party ran “whites-only” primaries. Klan terrorism, literacy tests and poll taxes also excluded Afro-Americans from the voting booth. Much of this was legally stricken by the 1965 Voting Rights Act, but violations and non-enforcement of the law objec­tively mean disenfranchisement today.

Black voting power is denied in at least two ways: discrimi­natory districting and discrimi­natory voting procedures. Gerrymandering distorts the shape of a voting district to restrict Black majorities. Before 1966 Mississippi had three congressional districts two of which had majority Black populations. After the state’s population expanded, redistrict­ing created five congressional districts. The Delta region, where Afro-Americans held a majority, was divided among four of the five districts. None of the districts is majority Black.

Discriminatory voting proce­dures provide another obstacle to Black political power. At- large voting requires that voters elect officials on a citywide basis instead of by district. This de­prives people of local representa­tion and makes it harder for Afro-Americans to win city of­fice unless they have a clear ma­jority. In 60% of those Southern cities without Black majorities and which use the at-large voting system, there is no Black representation at all in the city administration.

Dual primaries are another ef­fective tool to prevent Black rep­resentation. Under the dual pri­mary system, one must win an absolute majority in order to be elected. Frank Gilbert, a Black candidate for the South Carolina House of Representatives, won 46% of the popular vote in the primary, but lost in the runoff to a white candidate. This system allows the white candidates to coalesce a majority, since few whites vote for Black candidates.

Jesse Jackson has taken the clear lead in calling for an end to these racist practices. He not only talks about; he acts on it.

After the Louisiana governor and legislature canceled the April 14 primary, citing financial reasons, Jackson and his sup­porters filed a class action suit on behalf of Louisiana’s 450,000 Black voters. By canceling the primary in favor of caucuses, the number of polling places would be cut by 97% from 2,700 to 85, depriving many Black voters ac­cess to the polls. The caucus system also favors the Demo­cratic Party leaders, who deter­mine the sites and rules.

“This smacks of an anti- Jackson effort,’’ said Paul Valteau, sheriff of the Parish of Orleans, to UNITY. He added that the state’s move came from “fear that Jackson forces would mount a serious challenge to their hand-picked candidate.’’ The Justice Department has ruled that Louisiana cannot cancel its primary, which is now set for May 5.

Similarly, Jackson supporters1 have protested the caucus rules in Michigan, Washington, Mississippi, Arkansas and Vir­ginia. The rules stipulate that a candidate must reach an ar­tificial threshold of 20% of the vote before receiving any dele­gates. In Michigan, Jackson filed a lawsuit to protest the caucus’ use of signed ballots, but the suit was denied.

More than any other politi­cian, Jesse Jackson has placed the issue of equality and justice for Afro-Americans and other minorities on the political agenda. He had demanded that the other candidates repudiate the racist voting practices of the South.

As history has shown, it will not be easy to overcome decades of plantation politics, but this election year has shown that the Afro-American masses are voting in large numbers. This organized effort for voter registration strengthens the fight for greater democracy and ultimately for self-determination for the Afro- American Nation in the Black-belt South.