Amidst the fields and orchards of the San Joaquin Valley lies this small Kern County town where at least 17 children have contracted cancer in the past five years.

So far, eight children have died. Yet local, state and federal authorities have failed to come up with answers. Similar cancer clusters have emerged in agricultural towns such as Delano and Fowler.

On the town’s Chicano/ Mexicano east side, where most of the afflicted children live as neighbors, families have switched to bottled water. They say the tap water is poisoned with deadly pesticides like arsenic and DBCP, used for decades in the former grape and cotton fields where their homes now stand.

Rev. Jesse Jackson made three visits here in May and early June, to draw national attention to the crisis in this town of 6,200 people. On June 4, 2,000 people from McFarland, Delano and all over California joined Jackson in a march and rally supporting the families’ demands for a health clinic and for the investigation and eradication of the cause of the cancer.

The week before, Jackson had spent the night at the home of Ernesto and Tina Bravo, who lost their 14-year old son, Mario, to a rare liver cancer last November. Tina Bravo described to Unity how, during Jackson’s visit, hundreds of neighbors gathered as children came forward to talk to Jackson and a local doctor about their numerous unexplained aches and pains.

Jackson declared at the June 4 rally, “We are here because children are dying. The government says, ‘Prove it.’  Let them go to the funerals. .. . The whole nation must be concerned. We need an Environmental Protection Agency that protects the environment, not the agency.”

The families of the young cancer victims have displayed great courage in their struggle for life. They have gone up against an insensitive, nearly all-white town government, state authorities and medical “experts” who all deny any link between the childhood cancer cases. Many people believe that the authorities are afraid to confront the state’s huge agribusiness industry regarding the wide use of chemical pesticides.

Connie Rosales, whose son Randy was among the first to contract cancer, confronted the water company over a warning included in the monthly water bill, which said the water is unsafe for babies. The water company threatened to sue her. But she kept fighting until the company shut down Well #5, a brand new well which was found to be contaminated with DBCP. 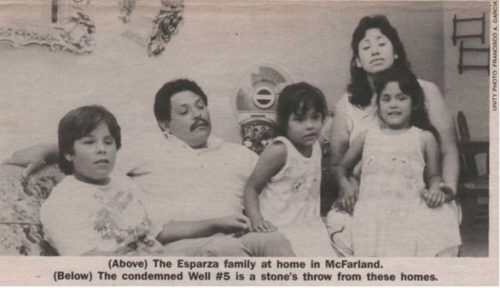 Joe and Rosemary Esparza’s 10-year-old son, Adrian, was found to have eye cancer when he was 7. Rosemary told Unity they “got a lot of harassment from the city officials, saying this was just a coincidence, maybe it was in our genes, we were taking herbs from Mexico, we were making a big deal out of nothing.”

“This area is where all the evil is, and they haven’t been able to find anything. But if anglos lived here, I bet they’d find answers real fast,” said Ernesto Bravo to Unity. Gov. Deukmejian has vetoed $125,000 to investigate the problem in McFarland. But the families of McFarland are determined not to give up. As Rosemary Esparza expressed to Unity, “Our children are our future. We’re fighting for this, and we aren’t going to quit.”