Along the lower Mississippi

The BASF petrochemical plant stands along the lower Mississippi River in the small, mainly African American town of Geismar, midway between New Orleans and Baton Rouge, Louisiana.  A generation ago, this was plantation land, producing sugar cane and cotton.

Today it’s a “chemical corridor,” with 95 petrochemical plants lining both sides of the river. BASF turns out antifreeze, seat cushions, and automobile paints for GM and Chrysler.

It also manufactures death. Toxic wastes from BASF and nearby plants penetrate the soil and water and foul the air. The Spanish moss that once covered the trees has vanished. Cancer, once unknown in the local Black community, is now the leading cause of death.

For years, the petrochemical industry held the state in its hip pocket. “They thought that with their high-powered attorneys and satchels of money, they could buy anything,” says Leslie Vann, an African American BASF worker and member of Oil, Chemical and Atomic Workers (OCAW) Local 4-620. In 1984, BASF, in one more show of arrogance, decided to drive OCAW from the plant by locking out 370 union employees and telling them they would never work there again.

It was the company’s undoing. After five and a half years of struggle, the 370 are back at work with full seniority. The industry suddenly finds aroused citizens scrutinizing its every move. Geismar shows what can happen when labor, environmentalists, and the African American community join forces.

When the lockout began, the union cause seemed hopeless. The state’s jobless rate was the highest in the U.S. The workers were up against a multi-billion dollar corporation. They could expect no justice from Reagan’s National Labor Relations Board.

Knowing they could not win on the picket line, the workers “started looking for things to stick the company with,” Local 4-620 member Roger Arnold told Unity. They found BASF was also a menace to public health, and began hitting the environmental issues.

“We knew phosgene and chlorine were bad,” Leslie Vann told Unity, “but we weren’t aware of aquifers and how chemicals seep right through the soil. We had kids 16 years old dying of cancer, and people just accepted it as an act of God. But after the lockout, when we started forming coalitions with environmental groups, we realized there was a direct connection. People started demanding to know what was going on.” 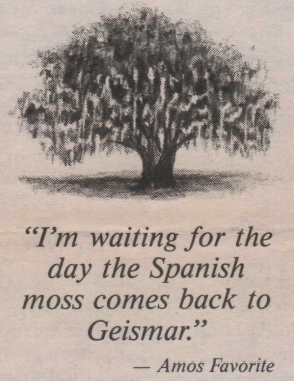 Amos Favorite was one of them. In 13 years, he has lost nine family members to cancer. He grew up in Geismar when it was still the old Waterloo plantation, its crops worked by African Americans. When the land was sold to the chemical companies, his family bought a small plot the companies didn’t want, far from the river. After generations of working someone else’s land, it was like a dream come true.

It soon turned sour. “We drank water from our own wells, 250 feet down,” he told Unity. “We used to get beautiful water, clear and sweet. Then it started turning yellow. … Everything it fell on would turn brown. About 13 years after the plants came, people started to die. Every weekend, we was marching behind somebody to the graveyard.”

State officials did nothing. “Louisiana politics is dirty,” explains Favorite. “You go out and steal a dozen eggs and you get 12 years, one for each egg. They steal your life and get away with it.”

In 1986, Favorite helped launch Ascension Parish Residents Against Toxic Pollution. With funds from OCAW and help from Tulane law students, the group sued the state Dept. of Environmental Quality. “Every time (BASF) wanted to have a plant expansion, we was there,” recalled Leslie Vann. “We’d show up at every hearing, we’d get the agenda and raise a fuss.”

Union members learned to take air and soil samples, and trained others. A planned $50 million expansion of the Geismar plant was held up when OCAW and Favorite’s group showed it was to be built on contaminated soil.

Finally, in December 1989, BASF settled with OCAW. “They thought, ‘Let’s bring these idiots back to work and they won’t have time to protest any more,'” laughs Leslie Vann.

Yet the struggle goes on. Local people who used to put up with pollution because petrochemical jobs paid well now say it’s not worth it. “We’ve got to clean the place up for our kids and grandkids,” says Roger Arnold.

“I can see the difference since we started raising hell,” Amos Favorite told Unity. “The Spanish moss has started to come back. It hasn’t reached us yet, though. I’m waiting for the day the moss comes back to Geismar.”