Prince William Sound on the southern coast of Alaska is one of the scenic wonders on earth, and home to a unique ecosystem teeming with hundreds of species of life. Snowcapped mountains ring a maze of inlets and islands. Sea otters, birds, and whales feast in steel blue waters, while deer and bear forage rocky beaches for food.

This delicate balance of nature was threatened 12 years ago with the completion of the Trans-Alaska Pipeline Terminal at Valdez Harbor. Now the worst nightmare of the native peoples and fishermen has occurred. 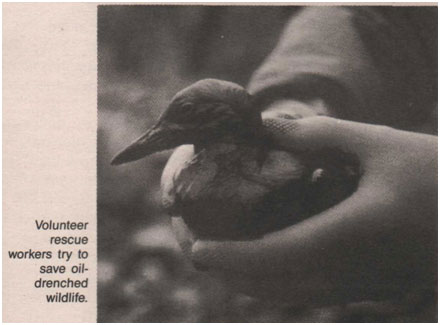 Black cod, shrimp, sablefish, and herring fishing were immediately shut down. Oil streamed across kelp beds, smothering fish roe — the next generation of fish. Deer are slowly dying from ingesting oil-laden kelp, and sea otters freeze to death in the icy waters, their insulating body oils destroyed by the petroleum.

The oil slick now covers over 3,000 square miles and less than 10% has been recovered. Some has sunk beneath the surface, entering the Arctic food chain through plankton.

The spill gravely threatens native peoples and local fishermen. Doris Kompkoff, an Alaskan Indian health practitioner in Tatitlek, a village of 117, told Unity, “I went down to the beach yesterday and found a bunch of dead mussels. We’re fishing people. What’s going to happen to our subsistence way of life?”

Cliff Ward, a board member of the Cordova District Fishermen United (CDFU), who has fished these waters for 10 years, expressed to Unity, “People are worried sick about a place they came to for peace of mind.”

In a race against time, fishermen are deploying oil booms around threatened fish hatcheries, like the one in San Juan Bay where 575 million salmon fry await their release into the now-tainted open waters.

This was a disaster waiting to happen. Reagan-era cutbacks have crippled the Coast Guard’s ability to guide the many oil vessels through the Sound’s narrow entrance. The state’s emergency spill response team was dismantled in 1981, and Alyeska, the oil consortium that runs the pipeline, had no plan to deal with a major spill.

Ken Adams of CDFU holds the oil companies and the government responsible, deploring the utter lack of leadership by President Bush in the face of this incredible national disaster. 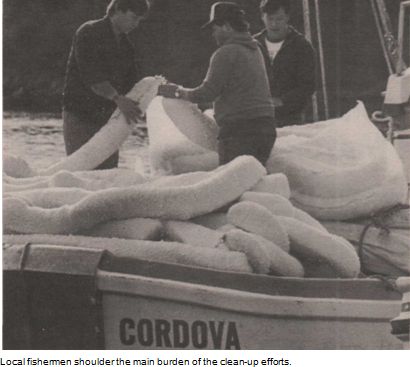 Weeks after the spill, exhausted local fishermen are still working day and night to shoulder 75% of the clean-up effort from the decks of their fishing boats. But the oil spill has also sparked changes in Alaska’s political landscape, so long dominated by big oil. Due to mass outrage and pressure, even conservative pro-oil politicians are now speaking out against oil drilling in ecologically sensitive areas such as the Alaska National Wildlife Refuge. (See Unity, “Arctic Village, U.S.A.,” February 16, 1989.) This issue stands before Congress. It may be years before the full losses are known. It is the hope of the people of Alaska that such a catastrophe is never repeated.

Stan Shikuma is a registered nurse, free-lance photographer, and is active with the Rainbow Coalition in Seattle.

Above photos contributed by Cordova photographer Rose Arvidson, who is volunteering her time to help the local fishermen.