To read the message of New Jersey’s self-styled Minister of Bantu Education Saul Cooperman (NJ Commissioner of Education), his and Governor Kean’s racist attempts to take over school districts “that fail” is intended to do nothing but help the children in those failing districts. 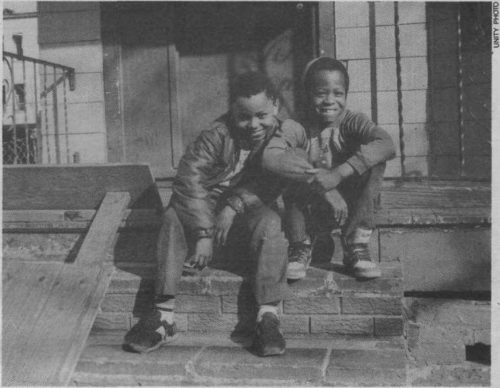 They present themselves as humanitarians striving to help the beleaguered (mostly African American and Puerto Rican) children trapped in the coffin of poorly administered ghetto schools. It sounds however, on repeated hearing, like the insulting lies told to the world by Reagan and his chief nigger basher, Ubersturmfuhrer Botha of South Africa. They say that sanctions on South Africa must hurt the poor black children of South Africa! The arrogance of such lies is stunning enough, but the mind that conceives it as something that a rational person would believe or consider has already partially rotted and is stickily oozing out of the dead speaker’s ear!

The state has already been sued by the school districts of East Orange, Irvington and Jersey City (Abbot vs. Burke, 1981). The courts ruled flat out that because of the inequality in the funding base of New Jersey schools that the formula for state aid to schools is unconstitutional. It “legally” creates school districts with wide disparities in state provided resources and finance, obviously unequal school systems. If state aid to rich districts and poor districts is the same it is obvious that rich districts benefit unfairly from tax dollars because they have a higher economic and social base to begin with!

For this reason another of Cooper-man’s Reagan-inspired ploys to lessen the number of minority high school graduates having access to universities, the High School Proficiency Test, also needs to be challenged on constitutional grounds. In most cases the so-called Proficiency Test would examine inner city high school students on materials that they have never seen in their curricula!

The Cooperman-Kean Bantu Takeover initiative now comes along and says that since these largely black and Puerto Rican districts cannot produce a “Thorough and Efficient” education as called for in state law, then they must be taken over by the Stanley and Livingston of New Jersey education!

Parents, education activists, and even progressive school officials have said for many years that the lack of resources, lack of self determination, the irrelevant texts, curricula and racist social system in this state as in the rest of the U.S., all make “T&E” almost impossible without radical change. Cooperman & Co. are not worried about our children’s education! First of all they want to keep control over school budgets like Newark’s 295.6 million dollars. The corporations and contractors who take the main slice of this budget and those of other minority school districts cause the funds to flow away from these cities, their work forces and local small businesses. The largest amount of such dollars supports the spiffy little suburbs beyond the reach of ghetto tragedy.

The fact is that now large cities like Newark not only have elected school boards, but more and more superintendents and other higher echelon officials. This means that the potential clearly exists not only for the cities to take control of these huge budgets and also to use them to educate their own children and to strengthen and develop their own communities. There are enough education activists so that this philosophy is gaining broad acceptance.

Cooperman’s frantic twisting and turning to “help the children” is focused principally upon the seizure of the Newark school system. What is being disguised is that the woes of the Newark school system WERE CREATED BY THE SAME FORCES THAT ARE NOW SCREAMING FOR TAKEOVER! Newark got an elected school board to arrest and eliminate a non-functioning mis-education system that was controlled by the traitor, Kenneth Gibson. And Gibson was always eminently answerable to the powers of white supremacy and mediocrity. These were his Gods!

The Newark school system was a famous “pork barrel” supplying jobs and consultancy for cronies, merchandise and construction contracts for greedy politicians and criminals. So that the people who now want to make this accusation about the Newark school system would be late even if they were more accurate than racist! The main problem is that finally the people of this city are in a position to genuinely run their own school system, to employ and contract with whom they want, and these funds can no longer be completely controlled from outside!

The other obvious intent of the takeover attempt would be to oppose radical changes in the curricula and teaching methods aimed at actually educating the ghetto cities children on the real side. New text- books focused on the actual residents of these cities, the use of the lives and culture of these children as a fundamental base from which to expose them to the universality of meaningful education. Mass input and radical transformation of the educational process itself!

Our children rebel in these schools because they are mostly being taught subservience and submission to a bankrupt exploitative racist system. Children who are walking encyclopedias of Rap, photographic recallers of the complete works of Michael Jackson or New Edition, annotators of the Fat Boys or Run-D.M.C., are called counterdisposed to learning because they resist believing that education is boring and anti-real-life.

Education was AGAINST THE LAW for the African American people until after the Civil War. The struggle to “integrate” public schools and employment in them is an ongoing and notorious feature of American life. But the political motion that was called “Black Power” which sought to control school districts and city halls, so that the people themselves might control and benefit from their own lives, was successful to the extent of beginning to elect more black officials in major cities. This meant that the racists had to find more ways to control since the straight out colonial methods had been shot down. As they are being shot down every day in Reagan’s Playground, fascist South Africa.

As long as the backward Kenneth Gibson had control over the school system and lets the white supremacists rip and run to their hearts’ delight, it was us calling for “T&E” and the white supremacists ignoring us. But now that there is an elected school board, “T&E” becomes the cover-up cry for a Klan raid on our self-determination.

Because, at base, the issue remains Self-Determination: the right of the people of Newark to determine their own destiny, to be in control of their own lives vs. Slavery, 1986 Style!

But make no mistake, there is plenty that needs correcting in the Newark school system and the people are looking to their elected school board and executive superintendent and mayor for leadership. It is time that they spoke out and helped to lead the fight against these attacks on Newark’s self-determination! This call for state takeover is a bold faced Reagan-smelling challenge to the people of Newark and to minorities and working people all over the country. Here in Newark, I can think of no issue more likely to bring the masses of the people back into the street with fire in their eyes than this blatant attempt at the restoration of white supremacy and at blunting home rule. There is no democracy without Self-Determination!