“My lifelong goal is to alleviate the suffering of the poor”

Mr. Lim has been an organizer in the San Francisco Chinese community for over 40 years. He has been particularly active in the Chinese workers’ movement. He is also a writer and poet. His essays have appeared previously in UNITY.

The leaves of the maple and poplar in the yard are lush and green, like the shadows of spring still lingering on. I come to this park quite often. I like to stroll on the street, look up at the trees, the green meadow and the many kinds of flowers.

Today as I watch, the leaves and flowers seem so beautiful. Isn’t this the best time in San Francisco? Right at this moment, someone familiar flashes by.

When I look closely, I realize it is Yeh Feng (whose name means Leaf-Maple). He is dressed in grey and is wearing a red cap. He is younger than me and a friend for many years.

Yeh is a progressive person. We became close friends and our friendship has deepened through the years. He is daring, straightforward with self-esteem and caring for others. He came from a poor family, so he didn’t finish college, but started working fulltime. 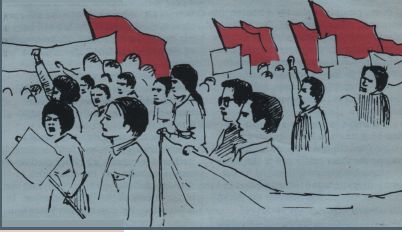 I met him at a rally for human rights. We sang and chanted together. The rally was for housing rights, for jobs for youth. It was against evictions, racial discrimination and oppression.

After the rally, he told me, “This is my first time participating … I could not let these greedy oppressors exploit people. I want to fight for rights for the people and fight for the betterment of the livelihood of the poor.”

Time has gone by. Things are pretty hard with the economic depression and inflation.

Yeh and I belong to Local 2 of the restaurant union. Our union tried to get some benefits for the workers. It demanded a pay raise and other benefits. We struck as negotiations with management broke off.

One time he and I were picketing in front of the Hyatt Hotel. We had a sizeable line going, about 20 people of different nationalities. We waved placards that read, “Do not cross the picket line,” “Raise pay,” “We demand improved treatment.”

Many people were held off from going in. Our chants were loud and clear. The police came and asked us to quiet down. We were arguing with the police — trying to defend our rights. But the police started to hit people with their sticks. Yeh got injured on his leg, but he did not stop after being hurt.

It was an event commemorating International Workers Day, and it was jointly sponsored by labor and progressive community organizations at Portsmouth Square.

It was a breathtaking scene. Most of the participants were Chinese, but there were other nationalities, too. I was eagerly listening to the speeches made by well-known people in labor. Yeh was standing in front of the stage handing out programs. We didn’t say hello because we were too far apart.

Then came the parade. The procession was four abreast, filling over ten blocks. With chanting slogans and singing in a sea of red flags — what an exciting scene showing the historic action of class-conscious workers. This was the great unity of the international proletariat — a scene of the bright future.

Yeh talked a lot as we walked along. He said to me, “My lifelong goal is to fight to alleviate the suffering of the poor. This consciousness took me out of my ivory tower. This is my choice, and I accept the challenge.”

As he was talking, his eyes glittered with happiness. I was delighted. I knew that he was young, only 27, and that he was honest.

One day I met him in a coffee shop.

“You write poems?” he asked.

“Yes, my poems glorify the people,” I said.

“I believe in socialism,” he said as he pulled a chair closer to me.

“I am satisfied to have such a friend,” I said.

He said, “For a person of this generation, it is hard to feel all right and keep quiet.”

“Let me tell you,” I sipped my coffee and continued. “True, a person’s capabilities are limited. But I have gone through struggle in this period. Often I ask myself whether I have shouldered my share of responsibility in this great period. To this day, I still maintain the ideal principle of always fighting for it.”

He looked at me, “Do good for the people when you can. We must continue to struggle. Fight against all oppression. I believe mankind will inherit a brighter future. Our strife will bring dim days to an end.”

Dare to create living conditions, dare to fight oppression. What he said was not at all complicated. Only with struggle to rid us of darkness will there be a brighter future. Think about his words. How much feeling was in it to motivate people.

So, after fully expressing his opinion and also by the time I was filled with joy and hope, he was getting ready to step out of the coffee shop quietly. I said, “Goodbye, I wish you well.”