Blood on the Plow

The Crisis in Family Farming

This country’s farmland is fast becoming a major political battlefield.

On one side are hard-pressed family farmers — with growing numbers seeking alliances with Jesse Jackson’s Rainbow Coalition and other movements for social justice.

On the other side are organizers for new and virulent varieties of fascism — including the Posse Comitatus and the LaRouchites. They have deployed a well-financed network of activists adept at building on the despair of rural working people.

Through speakers like Jim Wickstrom from the Posse and Bob Richards of the Populist Party, the far right has appeared at mass rallies from Minnesota to Missouri. Their tirades, often warmly received, combine anti-Semitism with paramilitary appeals.

“These hate groups talk a lot against the banks. They know right where to go to prey on people’s misery,” said Nebraska cattle rancher Merle Hansen. “A farmer will walk out of his bank feeling terrible. He’s been told he’s a poor manager. He sees a life’s work going down the drain. He feels guilty about losing land in his family for generations. Right then the LaRouche or the Posse people will hand him a pamphlet and say, ‘It’s not your fault; you’re not to blame.’”

“They’ll explain that the banks are the cause of the farmers’ troubles,” he continued. “And behind the banks are Henry Kissinger, David Rockefeller, and the Rothschild banks in Europe. And then behind them are the Jews — the international Zionist conspiracy.”

“Don’t think this stuff isn’t effective,” Hansen added. “Farmers are desperate and they’re going to go somewhere. They can go to the left with Jesse and the Rainbow or they can go to the right. But there’s one thing we all can agree on — the liberals are bankrupt.”

Tens of thousands of farmers have rallied around progressive groups like Minnesota’s Groundswell and Iowa’s Farm Unity Coalition. Hansen is president of the North American Farm Alliance (NAFA), a coalition of progressive farm organizations in the U.S. and Canada, and a leader of the Rainbow Coalition and farm adviser to Jesse Jackson.

NAFA has reported many cases where hard times have turned to tragedy. Farmers have committed suicide, in some cases after killing their families or bank employees.

Why such growing despair in the heartland of the U.S.? While the massive gatherings supported by Jesse Jackson, Willie Nelson and John Cougar Mellencamp have captured the public eye, few understand the depth of the problem.

“The Reagan administration has declared war on the family farm system,” said Hansen. “Farmers who have been trying to tough it out humped up like an old cow in a blizzard are going to perish in the storm unless they decide it is better to fight back than die.”

Small farms have been declining for a long time. While there were nearly seven million farms in 1935, there are only about two million left. About 72% are officially defined as small, with gross sales of less than $40,000 per year and a net income, if any, of less than a few thousand dollars.

In fact, 99% of the net income of small farm households comes from jobs off the farm. These are families in transition from being rural small producers to becoming part of the working class.

At the other end are the big farm operators, defined as those selling more than $500,000 of farm products each year. In 1982, while they made up less than 2% of all farms, they got two-thirds of all the net farm income.

This disparity is actually the result of two processes — one apparent, another more hidden. The first is the mechanization of agriculture going on for at least 60 years, leading to a decline in more backward practices such as sharecropping. Today’s urban ghettos have largely grown through this depopulation of the countryside.

Today this process is more of a background condition than a motive force. The farmers being hit hard now are those in the middle — they sell more than $50,000 in products each year but less than $500,000. Farming takes all of their time, so they can’t take a working class job to make ends meet. Yet they are not able to ride out economic storms.

“In the 1950’s we lost the tenant farmers, the 80-acre homesteads and a lot of people who were not regarded as good farmers,” explains Calvin Beale, a researcher with the U.S. Department of Agriculture (USDA). “This time you are losing people (seen) as the most aggressive and efficient commercial farmers.”

These farmers are being wiped out by government policies whose aim is to enrich agribusiness and use food as a weapon in dominating the third world. To see what is going on, one needs to review some terms of farm economics — parity, price supports and deficiency payments. 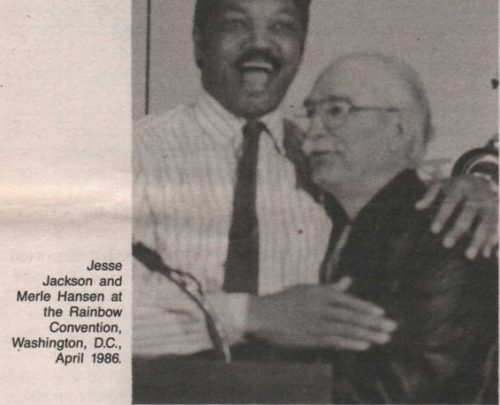 Since the Great Depression, minimum prices for most farm products have been set by Congress, and an economic index was established for rural areas similar to the cost-of-living index in the cities. Based on the cost of producing a crop in relation to its selling price, the aim was to set crop prices at a level where a farmer’s income would be “on a par with” or “at parity” with an urban worker’s income. If prices were too far below parity, farmers would suffer. If prices were too far above, urban consumers would suffer.

In the early 1940’s, New Deal legislation set prices for farm goods near100% of parity, and these prices were “supported” by a government loan program. This meant the farmer was no longer at the mercy of grain and food processing companies. If he couldn’t get a good price in the market, he could hold back his crop until he did, since he could borrow its value from the government at low interest.

Parity and price supports worked for the farmer like minimum wage and the right to collective bargaining did for the urban worker, as a reform protecting small producers against monopolies.

But by 1953 the monopolies regained the upper hand. At their direction, the USDA began setting prices way below parity. Today Reagan maintains this policy with a vengeance — the purchasing power of a farmer is now much less than the lowest years of the 1930’s. For years prices have been set so low that farmers are forced to sell their crops for less than what it costs to produce them.

“It means that the great majority of farmers receive no income for their labor on the farm,” explained Carol Hodne, NAFA’s executive director. “Most farm families live below the official poverty line.”

How can farmers continue to grow crops at a loss? Mainly by going deeper in debt in the hope that next year’s crop would be more profitable.

“Farmers who worked all year,” Hodne adds, “have gone into their local banks and said, ‘Well, I didn’t earn enough money on my crops last year to pay all my production costs or to. keep my kids in shoes.’ The banker would say, ‘Well, that’s too bad . . . But I can loan you more money because your land value went up. Just sign here, and, by the way, we’ll need to include your equipment as collateral. Are you sure you couldn’t use another $20,000?’”

By 1981 this situation went from bad to worse. In addition to operating at a loss, export markets declined and land values fell — 19% nationwide and 49% in the Midwest by 1985. Family farmers were now trapped in a classic form of debt peonage.

But artificially low prices benefit agribusiness in other ways. First they regain some of their costs through “deficiency payments” from the U.S. Treasury based on the difference between the actual and projected prices of farm products. Different from parity price supports, this is a kind of welfare payment for farmers that appears to dampen food prices.

Can urban workers unite with a movement that seems to be trying to raise food prices? “Food price increases have little connection to what a farmer is paid,” says Hansen. “A farmer today only gets a nickel for the wheat in a dollar loaf of bread. So even if that was doubled, the price would only go up five cents. But a healthy farmer also helps labor by creating farm-related jobs in small towns.”

But more important, agribusiness uses below-cost-of-production prices to undersell native farmers in third world countries. A League of Rural Voters’ report states, “Unable to earn a profit from farming, many of these poor farmers are driven off their farms and forced into overcrowded urban slums or shantytowns. The land will no longer be cared for; it may eventually erode or turn into desert, or it may end up being absorbed into ever larger estates of wealthy absentee landlords.”

The Reagan administration, the report adds, “refuses to see the disastrous implications of its policies. The more that poor countries are dependent on the U.S. for imported foods, the larger their foreign debt becomes. The bigger these debts, the more land they must devote to export crops to service this debt. The more land devoted to cash crops, the less devoted to food. And the less land devoted to food means increased hunger, starvation and dependence on the U.S. for food aid — a downward spiral heading for disaster.”

Rock’s LiveAid and Willie Nelson’s FarmAid, in this sense, are more connected than the entertainers might have imagined. In fact, the demand of the third world countries for a new economic order to overcome past inequalities is in many ways similar to the small farmers’ demand for parity.

“Farmers are the colonial people on the mainland,” says Hansen. “Farmers are raw materials producers facing a similar kind of exploitation. Some people see our struggle as little farmers against big farmers. That’s true. Our immediate program is for parity prices, a moratorium on foreclosures, and emergency survival assistance. ”

“But there’s a lot more to it. Our fight goes to the heart of the injustice of corporate America. We see ourselves as allies of all its victims.”

“That’s why we call for peace, parity and power to the people. Our basic slogan — ‘Farms, Not Arms’ — goes beyond economics. We can only win as part of an overall struggle for democracy and social justice.”