“I am approaching the end of my life, and I do not want to go without first set­tling this issue. (The official pardon) is so very important, not only to me and my family, but also to all Mexicanos,” Pedro Jose Gonzalez told Alicia Alarcon of the Los Angeles newspaper La Opinion.

The pardon refers to the criminal case that ended on March 30, 1934, in a wrong­ful conviction and a 50-year prison sentence. 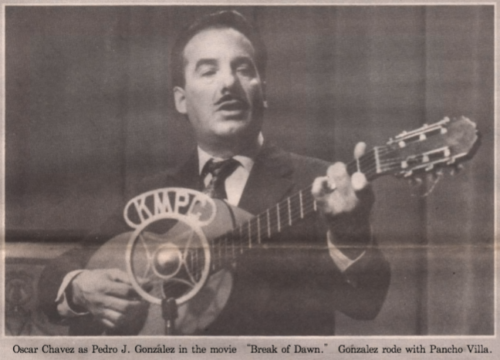 The case stands out be­cause of the stature of this great Mexicano veteran of the 1910 Mexican Revolution, singer, and DJ par excellence, who for over 50 years helped his people on both sides of the border.

Today, Gonzalez’ family and friends are fighting to correct a grave social injustice by seeking an official pardon for this innocent man.

The film Break of Dawn (1989) depicts Don Pedro’s life. Director Isaac Artenstein, who has joined in peti­tioning California’s Governor Deukmejian for a pardon, told Unity, “Only community pressure can produce a posi­tive resolution of this case.”

Pedro Jose Gonzalez was born in Carrizal, Chihuahua, Mexico, in 1895. At 14, he en­listed in Pancho Villa’s popular army at the start of the Mexican Revolution. He later went to El Paso, Texas, then to Los Angeles in 1925. In 1927, thousands of La­tino homes awoke to “Las mananitas tapatias” and “Los Madrugadores” (the early- risers), the first Spanish language radio program in the U.S., begun by Pedro Gonzalez at Los Angeles’ KMPC station. His program was swamped by people dropping by to say hello, share the microphone, and pass the time. The Artistic Circle club that he began on the program came to have over 100,000 members.

The pressures of the Great De­pression began by the early 1930s. Scores of workers were kicked onto the streets. The atmosphere slowly became ugly, with racist overtones. Thousands of Mexicanos and Chicanos were uprooted as mass depor­tations reached distressing figures.

Many radio listeners found a sense of security and strength in hearing Pedro Gonzalez’ inspiring social commentary in between songs: “First they steal half our ter­ritory, and now they want to treat us as if we were cattle that you just re­turn when no longer needed. Many (Mexicanos) lived in Los Angeles way before there was even immigra­tion laws!”

Gonzalez sang, awakened con­sciences, and inspired the Chicano/ Mexicano community to know and exercise their rights through organization.

Ruben Gonzalez, one of Pedro Gonzalez’ sons, told Unity, “People from the District Attorney’s office got in touch with my father several times to warn him to soften his commen­taries.”.

A trap was laid, and a woman accused him of assaulting her. The DA had no solid evidence. But the judge and jury, moved by the anti-Mexicano cli­mate, sentenced him to 50 years.

A couple of years later, would-be victim Doris Versus recanted her testimony. Ruben Gon­zalez told Unity,“At this time, she revealed that persons in the juvenile department associated with the DA’s office had forced her to make up the accusation.”

After serving five years in San Quentin, Gonzalez was deported to Mexico in 1939. But this persecution did not dampen his spirit nor his popularity. From 1940 to the mid-1960s, he returned to radio with his “Los Madrugadores” on stations XEGM and XEAU in Tijuana, Mexico, reaching listeners from Los Angeles to inland cities in Mexico. He helped Mexicanos migrating to the border areas to form coopera­tives, and, using his vast network of contacts, he helped them obtain land and material to build shanty homes.

California state Senator David Roberti is among those seeking a pardon for Gonzalez, who now re­sides in a California convalescent home. Roy Perez of Roberti’s office told Unity that Gov. Deukmejian is to decide next month on the petition for an official pardon. Justice is long overdue.