Bringing home the spirit of Nairobi

NAIROBI, KENYA — The scene: the official UN conference held at the Kenyatta Center here July 15-26 to mark the end of the Decade for Women.

• A vote is taken calling for mandatory trade sanctions against racist South Africa. The U.S. delegation casts the lone vote of opposition, amidst thunderous boos and whistles.

• An Israeli delegate attempts to address the floor. Nearly 1,000 Arab women and other supporters of Palestinian national rights storm out in protest. Kenyan police lock the doors to keep the women from taking to the streets. Instead, they march and chant around the Kenyatta Center (site of the conference) for the rest of the Israeli presentation. 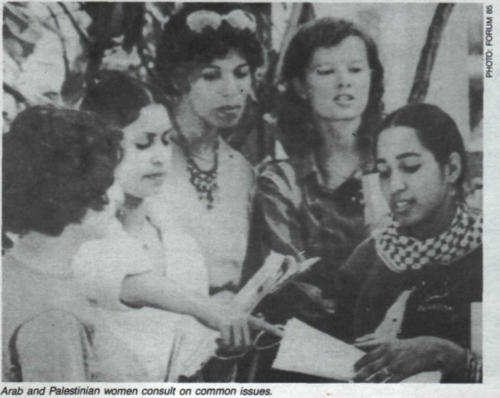 • Under pressure from pro-Zionists, the Kenyan censorship board bans showing of “Leila and the Wolves,” a film about the Israeli invasion of Lebanon. The Arab Solidarity Women’s Group organizes a protest meeting. A pro- Zionist U.S. delegate lunges to physically attack an Arab speaker. The crowd restrains her as women shout, “Zionism raises its head again!’

These are just a few of the highlights we witnessed as participants in the NGO Forum ’85. These clashes reflect a class struggle in both the official UN and non- governmental arenas over basic issues affecting the world’s women.

As NGO delegates, we could not directly participate in the official UN conference. But I found that many progressive U.S. Forum ’85 delegates felt we had more in common with many third world UN delegations than we did with the official U.S. delegation.

More on the official UN conference later. First I want to share some comments on NGO Forum ’85.

Forum ’85 drew nearly 15,000 women-a majority working and third world women, and many from rural areas. This was probably the biggest gathering of women from such diverse racial, cultural, political and economic backgrounds ever to assemble in one place!

Even from the U.S., there were many women of color and working class women. This gave a broader and more accurate picture of what the U.S. women’s movement is all about. (Nearly absent was the mainly white middle class NOW, which sent Betty Friedan, but chose to hold its own national convention at the same time as Forum ’85!).

The issues here were as vast and varied as the women and groups that came. We discussed everything from health and il- literacy among women, reproductive rights and family planning, violence against women and sexual abuse, and women’s unpaid labor in the homes and fields, to women’s role in politics and national liberation movements.

But on certain key issues of opposing apartheid, Zionism and imperialism, there was universal solidarity. I think this was because there were so many third world and working women, who identify with women involved in struggles for self- determination. Of the hundreds of daily workshops, these were among the most crowded. There was also great concern over the danger of nuclear war, and support for the idea of establishing a new world economic order.

South African and Palestinian women struck a theme which applies to millions of third world women—that women’s emancipation goes hand-in-hand with national liberation. Even the struggle to overcome old feudal traditions can only take place as a part of eliminating foreign domination and winning genuine self-determination.

At a press conference on South Africa, a woman from the African National Congress (ANC – one of two South African liberation organizations with observer status to the UN) explained some of the conditions black women face under racist, fascist white minority rule. Most women must live in the barren bantustans, and suffer oppression as a nation, by tradition and as workers. Many young black women are choosing not to marry or bear children until they know their children can grow up and have a father to help. Men are often separated from their families and forced to work far away. She concluded, “Emancipation will come through a process of struggle for national liberation. Women will have no political, social or economic rights unless they involve themselves in struggle. Women’s rights must be fought for along- side struggle for national liberation.”

Similarly, Fawzia Hassan, a Palestinian woman, explained that the struggle for self-determination is at the heart of the struggle to liberate Palestinian women. ‘For Palestinians,” she said, “the situation is one of apartheid.” She said that Palestinian women are barred from the Israeli universities, and are strip-searched when crossing into the occupied West Bank. She pointed out that Palestinian men, women and children have been violently uprooted by Israeli Zionism. She said, “Palestinians, including the women, are being forced to become menial workers, where they once owned their own land.” She added that there can be no peace in the Middle East without the establishment of a Palestinian homeland.

Overall, Forum ’85 had a progressive character and the level of unity was high. As Peggy Burress, an African American photographer, told this UNITY reporter, “I got the feeling that most of these women believe that without progress on women’s issues, humanity as a whole can- not progress.”

Although the U.S. media clearly downplayed Forum ’85, most delegates called it a success. However, certain things limited the impact such a conference could have had.

Just weeks before, the Kenyan government moved back the dates for Forum ’85, and overlapped it with the official UN conference This caused serious problems for women whose travel dates were set, causing some to return home before Forum ’85 was over. Also, the overlap­ping dates forced many women to jump back and forth between the two confer­ences, limiting their participation in both.

Like the Mexico City conference that launched the Decade, and the mid-Decade conference in Copenhagen, Forum ’85 was designed to make the issues more scattered and diffuse. There were no plenary sessions for all Forum ’85 participants, and not even a closing address to sum up what we had ac­complished. The issues were aired in hun­dreds of daily workshops, but without any formal resolutions for NGO delegates to convey to the official UN delegations. Most discussions took place in smaller groups or one-to-one.

But due to the initiative of the par­ticipants, much was learned and shared, and many new working relationships and networks were forged. Calls were issued for an African women’s conference and a third world women’s conference in 1990.

The official UN conference included women’s delegations from nearly 160 UN member states. The role of the NGO’s here was to lobby their own government delegations on key issues.

But the U.S. official delegation offered U.S. Forum ’85 delegates no real chan­nels to influence their right-wing posi­tions. In fact, most U.S. women were totally unrepresented in this delegation, which was headed by Maureen Reagan and consisted of 32 other Reagan ad-­ ministration selectees — mostly Repub­licans and no poor women or workers.

Bertha Gilkey, head of the Cochran Gardens Housing Projects tenant group from St. Louis, told UNITY of her outrage at the daily briefings of NGO delegates before each UN conference session. ” ‘One doesn’t vent his dirty laundry before the world,’ Americans were told. But 90-95% of us disagreed with what was said. It was a direct attack on our own freedom of speech!”

The most intense struggles revolved around U.S. insistence on “separating” political issues from women’s issues — particularly issues like apartheid, the Palestinian question, and calls for a new world economic order. Overall, the U.S. positions were generally isolated and defeated by the great majority.

Ms. Reagan’s first move was to push for all resolutions to be passed unanimously. This way, a single country could block certain issues from being adopted. Instead, the conference agreed to try for a consensus, but pass disputed resolutions by a two-thirds vote.

Struggle then shifted to the resolutions. The U.S. engaged in blatant obstructions of points implying criticism of U.S. for­eign policy. U.S. objections to certain paragraphs were the main factor prevent­ing a smooth ratification of the 372- paragraph “Forward Looking Strategies” for women till the year 2000. This docu­ment is a non-binding set of resolutions to be submitted to the next UN General Assembly for adoption.

But when a vote was finally taken on the call for mandatory trade sanctions against South Africa, the U.S. stood alone in opposition. In addition, the U.S. failed to block paragraphs dealing with reorganizing the world’s economy and giving assistance to women in national liberation movements.

The most heated debate erupted around the inclusion of Zionism as a form of racism. This debate threatened to hold up approval of the entire “For­ward Looking Strategies,” and, at one point, U.S. and Israeli delegations threatened to walk out. In the eleventh hour, Kenyan hosts proposed a com­promise to drop the word Zionism and substitute “all forms of racism.” For the sake of unity, the PLO (Palestine Liberation Organization) agreed to the wording and the body adopted it.

But since the Decade began, studies have shown that women have made little progress in most parts of the world. Women still perform two thirds of the world’s work, receive one tenth of its in­come, and own less than one hundredth of its property. In the industrialized capitalist countries like the U.S. as well as in the third world, many gains women have made in education, health care, jobs and political representation are being eroded by recession, capitalist in­dustrialization of agriculture, and by the increase of single mothers. Also, a legacy of colonialism and imperialism has left third world women struggling to over­ come even greater obstacles. Their future is tied to the need for a new world economic order.

Thus it will take more than this set of non-binding UN resolutions to bring about real change.

So now that we’re back, our job is to continue the spirit and struggles of Nairobi here at home.

Jamala Rogers, who compiled this report, is a UNITY correspondent from St. Louis, Missouri. She was a member of the Interna­tional Council of African Women delegation to Forum ’85.