Chicano Studies and the Chicano intellectual

A crisis is brewing on the college campuses for Chicano students and faculty, one that threatens the future and direction of Chicano Studies. Over the past two years, I have watched friends rejected for tenure by their departments or universities at campuses like Stanford, and the Uni­versity of California at Santa Barbara, Berkeley and Davis.
The official explanation varies, but at the crux of the matter is that the universities do not want progressive Chicano faculty. As Carlos Mufioz, Chicano Studies faculty member at UC Berkeley, told me, “It’s the 1950’s all over again. McCarthyism is alive and well. They aren’t just going after ‘leftists.’ They want to get rid of anybody left of center, and Chicanos are the first to go. All they want is a few tokens on campus that will agree with them politically.” 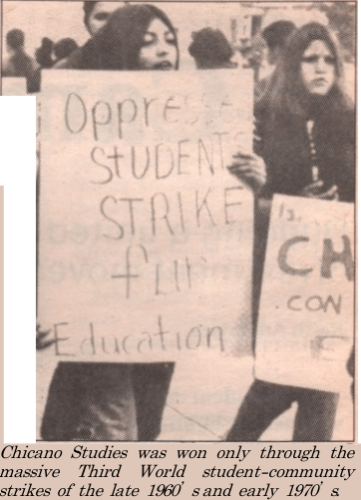 University administrators criticize Chi­cano scholars as “inferior” and “unobjective,” while right-wing scholars receive no such criticism for slandering Chicano culture and history. Chicano intellectuals are denied tenure for not publishing enough in journals of their academic discipline—yet these journals seldom accept articles by and about Chicanos.

Part-timers are fired. Chicano Studies classes are shifted to “regular” depart­ments like history or political science, or Chicano Studies departments are merged with other programs, such as at UC San Diego where Chicano Studies was re­absorbed into “Border Studies.”

Chicano intellectuals can take one of two approaches to deal with these attacks. One path would be to try to become more academic, more “qualified,” along the lines the university is demanding. This means being less active in the Chicano Movement, less radical, less willing to rock the boat. Some Chicago faculty see this as the safest way to keep their jobs given the growing conservatism.

However, this is where Chicano schol­ars must look back and recall where their jobs and Chicano Studies itself came from. Past experience has shown that the only effective way to fight is by linking up with students and community, as part of the Chicano Movement.

Chicano Studies was won only through the massive Third World student-community strikes and struggles of the late 1960’s and early 1970’s. It had to be forced down the throats of the universities, with Chicano faculty to teach Chicago Studies. Many of these younger faculty came out of the student movement, and were the sons and daughters of farm workers and steel workers. As Mufioz told me, “We wouldn’t be here if it wasn’t for the 60’s and we can’t forget that.”

The movement had a revolutionary outlook which ex­posed the very role of the universities as racist institutions, fundamentally op­posed to the interests of the Chicano peo­ple. The movement said no to university research for weapons to be used against third world peoples fighting for their liberation. Chicano students and faculty protested the use of university funds to develop tomato harvesters for agribusiness capi­talists who wanted to use this equipment to break the strikes of the United Farm Workers union.

In this early period, Chicano Studies challenged the orthodox, racist views of Chicano history. Journals like El Grito and Aztlan carried articles by Chicano scholars written from the perspective of an oppressed people. These writings hit at the lies of bourgeois social science which still blame poverty on the “defects” of Chicano culture, and many articles pointed to capitalism and imperialism as the source of Chicano oppression. Chi­cano intellectuals also aided community groups, such as in helping to develop studies to stop urban renewal projects aimed at destroying the Chicano communities.

Today, there is still a crying need for more research and theoretical work which draws its inspiration from the lives of the Chicano people and serves the Chi­cano Movement. Articles are needed ex­ posing the national oppression of the Chicano people, and highlighting and an­alyzing the people’s resistance. We need studies on everything from Chicano vot­ing, land and immigration rights, to health and living conditions of Chicanos in the rural and urban areas. But to do this, Chicano intellectuals must con­sciously view themselves as being on the side of the masses, and must put their skills at the service of the struggle for democracy and liberation.

In turn, the Chicano Movement must value its intellectuals. Mass struggle involving students, faculty and community must intensify to defend Chicano Studies and secure the jobs of progressive Chicano faculty.

Groups like the National Association for Chicano Studies (NACS) are impor­tant in this context, because they provide a natural network for organizing mutual support among Chicano faculty. The theme of this year’s NACS conference, to be held in Sacramento, California, on March 21-23, is “Chicano Politics After 1984.” It will involve groups such as the Latino Agenda Coalition, the Southwest Voter Registration and Education Project and the Rainbow Coalition. This can help link faculty, graduate students and com­munity activists, and help build the unity of the Chicano movement.

As Chicano intellectuals, we owe much to the movement, and it is in our interests that the Chicano Movement grows strong and powerful. There is a saying from the early 1970’s which is still appropriate today: “Luchar es aprender. Aprender para luchar.” (To struggle is to learn. Learn in order to struggle.)