The 1980’s is termed the Decade of the Hispanic. In the 1984 elections Chicano and Latino voters, dramati­cally increased by the largest voter registration drive ever launched, are ex­pected to play pivotal roles. As such, Chicanos and Latinos are being courted by politicians of every stripe.

Chicanos and Latinos have an im­portant role to play in the future of this country. They have their own griev­ances which must be addressed and can help usher in a new era of progressive politics. It is in this context that it is especially urgent that Chicanos and Latinos support Jesse Jackson for president of the United States. Black- Chicano/Latino unity is pivotal to any progress for both Black and Chicano people as well as everyone else. 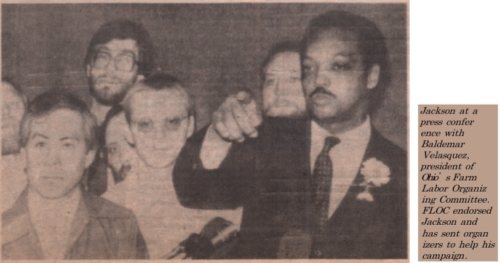 Jesse Jackson is clearly the most pro­gressive candidate seeking the Democratic party nomination. His opposition to U.S. intervention in Central America; his firm opposition to the Simpson-Mazzoli immigration bill and his commitment to a uniform immigration policy applying to both Europe and third world countries; his support of affirmative action; his commitment to work for the Equal Rights Amendment and oppose any restriction of the right of women to birth control or abortion; his opposition to right-to-work laws; and his commitment to fight for a full implementation of the Voting Rights Act are clear reasons that Chicanos should support Jackson.

But unlike the Black vote — which has gone overwhelmingly for Jackson — the Chicano vote is split, with many Chicano/Latino politicians and others supporting Mondale or Hart instead of Jackson. Why has this been so?

Reasons for not supporting Jackson?

There are two common reasons why Chicanos/Latinos support Mondale or Hart, even though some say they like Jackson’s positions the most. The first is that many progressive Chicano activists believe that they personally, and Chicanos overall, will gain more by work­ing within the “mainstream” of the Democratic Party and supporting a can­didate who realistically can win the nomination and the presidency. (Jackson has little chance of achieving either goal.) The victory of a Chicano-supported candidate supposedly will be repaid with stands such as opposition to the Simpson- Mazzoli bill and appointments to influen­tial posts.

A second view argues that Chicanos and Latinos have little to gain by endors­ing what is essentially a Black campaign. This view holds that they should forge their own independent political clout and negotiate on their own with the main­stream of the Democratic Party. This view does not oppose Black-Latino unity, but believes that such unity should be built later, from a position of equality.

Both these positions carry some weight and certainly can be held by people genu­inely concerned with justice and equality for Chicanos. I believe, though, that these two views are shortsighted.

Regarding the first view, let’s not be naive. The concessions which Mondale or Hart could bring would fall far short of what the Chicano and Latino people need. Full participation in the political life of this country requires more funda­mental change. It will not be given out of gratitude for our support, but will have to be taken from a position of strength.

The things that we need are: full em­ployment, affirmative action, bilingual education, and immigration reform, among others. The reforms we must have in order to participate fully in all the political institutions, including the Democratic Party, are: an end to dual primaries, affirmative action on all levels, financial support for poor and minority candidates, a progressive plat­form which speaks to the needs of Chicanos and other oppressed sectors, proportional representation, and an end to gerrymandering. Basically, these are the same things Black people and Jesse Jackson are calling for.

Mondale, for example, still refuses to make any pledge to oppose dual primar­ies in the South — a practice that hurts the chances of Chicano candidates in Texas as well as Black candidates in the rest of the South. The Democratic Party fears the possibility of an open debate at its na­tional convention on its structure, voting rules and platform.

Despite all of its talk about being the “party of labor and minorities,” the Democratic Party actually prefers the current racist and ultra-conservative “boll weevil” Democratic Congressmen and Senators. This practice helps the party maintain numerical control of Con­gress and key House and Senate commit­tees, while maintaining the power of racists at the expense of Chicano and Black people.

Only the united strength of Afro-Americans and Chicanos can make these changes. Jesse Jackson’s campaign speaks directly to enacting these com­monly desired changes. For the im­mediate and long term benefit of Chicano and Latino candidates and of the masses, Chicanos and Latinos should join the Jackson campaign.

The second argument also misses the point. Of course Chicanos and Latinos should build an independent movement and should not just be blended into the Black movement. No one is calling for that. And in the future, when the Chicano and Latino movements will be stronger, there will be many other opportunities for unity with Black people. However, this is no reason not to support the Jesse Jackson campaign now and not to unite today with the Black masses. This unity does not preclude continuing to build an independent Chicano and Latino movement both within and without the Democratic Party.

How ironic that progressive Chicano forces see nothing wrong with riding the coattails of white liberals, but refuse to support Jackson. He is the only candidate who has experienced racism firsthand and whose stands on Chicano/Latino issues are much stronger than any white liberal!

True, there is no guarantee a Black politician in power will be any more (nor any less) responsive than a white liberal. In any case, when we speak of Black-Brown unity, we are referring to the unity of Black and Brown peoples, not just politicians. The Black and Chicano/Latino movements must demand accoun­tability from the people we elect.

The Chicano movement has a material reason to ally with the Black Liberation Movement. Chicanos in the Southwest and Black people in the South both con­stitute nations oppressed and subjugated by imperialism. Both are denied the fun­damental right to self-determination. Their cities have been gerrymandered to keep Chicanos and Black people from winning political power. Both have been used as pawns by the two major political parties, especially by the Democrats who take the Black and Chicano vote for granted.

Furthermore, the Black Liberation Movement has spearheaded the struggle of oppressed nationalities. In the 1960’s, the militancy and outlook of the Black struggle set the tone for all social movements. It broke down the doors of Jim Crowism and paved the way for the Civil Rights Act, Voting Rights Act, and many other important social reforms which benefit all oppressed nationalities.

Imagine the power which 30 million Black people and 15 million Latinos in this country could have if their move­ments were united in their political aims!

The Rainbow Coalition is just the first step in the kind of alliance that ultimately needs to be built. What is required goes beyond an alliance of Afro-Americans, Chicanos, women, and the other parts of the Rainbow Coalition. Ultimately, to rid this society of the class rule of the capitalists, it will be necessary to forge an alliance between the multinational work­ing class and the movements of all the op­pressed nationalities. Only such an alli­ance will be able to crush the capitalists and establish a socialist society, where genuine democracy and equality can be practiced. The Jackson campaign/ Rainbow Coalition is an important first step in that larger effort.

It is clear that Chicanos and Latinos will play a major role in selecting the Democratic nominee. It is also clear that they will play a major role in the struggle to defeat Reagan in November. But right now it is important that Chicanos and Latinos support Jackson as part of the struggle against Reagan and everything that he represents. The growing power of the Chicano and Latino people must be wielded thoughtfully, and when it is, un­doubtedly it will be aimed at the very core of this racist society.