Looking back on a decade of work, looking ahead to the future

December 26 is the 10th anniversary of the Chinese Progressive Association in San Francisco. The Chinese Progressive Association (CPA) is a mass community organization located in the heart of Chinatown. It has over 100 members, a majority of whom are Chinese working people. CPA was founded in the early 1970’s in the basement of the International Hotel by old-time Chinatown leftists, students, workers, and other progressive and revolutionary-minded people who wanted an organization for the masses to fight for the rights of Chinese people.

Today, CPA offers English classes to new immigrants, aid and labor support to Chinese workers, tenant counseling, and is active in issues such as immigrant rights, China friendship and the disarmament movement. On the occasion of CPA’s 10th anniver­sary, UNITY is reprinting in part an article on the organization’s history from the CPA 10th Anniversary Yearbook, written by Wilma Chan, one of CPA’s founding members.

The Proclamation at CPA’s founding on December 26,1972, read, “There is an old maxim ‘one seeks change when one has nothing, and when one seeks change, anything can be solved.’” More than anything else, the con­tribution of our Association has been in showing concretely that change and progress are possible if we rely on ourselves and the people of our community to fight to shape our own destinies. What better proof is there than the years of work our Association and thousands of others in Chinatown put in to­wards pushing for normalized U.S.- China relations, finally realized in Jan­uary of 1979. When CPA began in 1972, we faced a very different situation in Chinatown. The Kuomintang (KMT) was still very strong and unchallenged; books and other products from China were rarely found on the shelves of our stores; it was nearly impossible for individuals to obtain visas to visit China.

At the same time, among the masses in Chinatown, sentiment supporting China was deeply felt and strong. China’s in­fluence in the world was developing every day. The people of new China had stood up and the masses of Chinatown wanted to lift our heads too.Under these circumstances, CPA’s temporary steering committee initiated the first outdoor celebration of China’s October 1st revolution in 1972. KMT thugs posted death notices in the park the night before the event, the San Francisco police promised no protection, but com­munity residents turned out 1,000 strong. Spirits that day literally soared as high as the five-star flag flying over Portsmouth Square. A new page in the history of the Chinatown progressive movement was turned, largely because of the boldness of the masses. 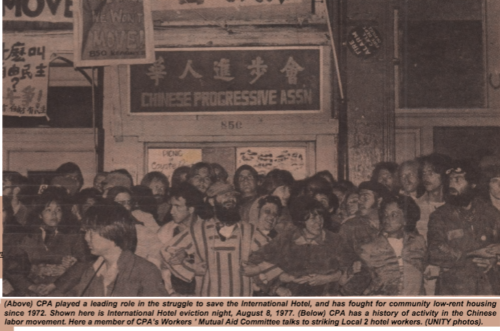 In the early days, CPA became known for its bold approach — an approach not built on adventurism or wild dreams, but on the foresight and daring of the com­munity’s working masses and an ap­proach which was necessary to an awak­ening decade of struggle for our people after almost 20 years of repression follow­ing the McCarthy era. Besides China support, CPA in the early days took up many new kinds of issues. Most memorable was support for the Chi­nese and Pilipino tenants of the Interna­tional Hotel against forced evictions and for low-rent housing. We were active in or­ganizing the community against the Viet Nam War through our participation in The Bay Area Asian Coalition Against the War. We helped form the Harry Wong De­fense Committee, which was ultimately victorious in fighting the Kuomintang, police and the U.S. court system. That summer of 1972, CPA united community residents, Asian lawyers and social service agencies to march down Grant Avenue to the Vallejo police station — the first march of its kind — to protest the brutal false arrest of news vendor Harry Wong, a CPA member, for selling literature from China. But taking up these issues was not the only innovation CPA strove for. What we tried to do and still try to do have been to organize ourselves, teach ourselves, and learn from and teach the masses con­cretely how to unite, how to conduct a fight and how to make change come about. We are not just a service organiza­tion, not just a social club, but we com­bine all these to be a true mass organiza­tion built by and for the masses — an organization which is our own vehicle to fight against discrimination and for our rights as Chinese people.

But what is our backbone which has sus­tained us over 10 years? It has been the Chinese working people. Our Association has always and will always welcome all progressive people — students, profes­sionals, shopkeepers. But from the start, we could not have succeeded without the support and participation of Chinese workers who make up 75% of our community and well over 50% of our members.

We have taken up many particular work­ers’ issues through the years — among these support for the fired Asia Garden workers in 1973, the Jung Sai and Mandarin unionization drives in 1974-75 and, more recently, support for the Local 2 hotel workers’ strike and the Naline garment workers’ struggle against harassment.

These and other struggles show the truth of Mao Zedong’s statement that, “Where there is oppression there is resist­ance.” CPA’s strength lies with Chinese workers. Chinese working people have shown that they must and will lead the fight for survival, for a better life and for equality, both for themselves and in the interests of all Chinese people.

Unity in the community 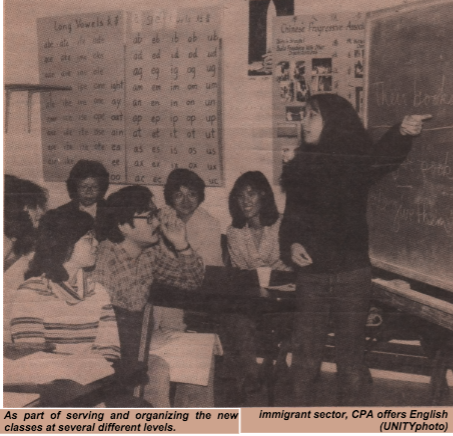 Beyond this, to be a strong mass organi­zation we strive constantly for unity within the ranks of our membership and to unite broadly with other groups in the community.Our membership includes Loh Wah Que (older Chinese immigrants) and fifth generation Chinese Americans, 20-year- olds and octogenarians. To keep us all on the same track and all working for the same goals has not been a simple task.

Take the question of immigrants and American-born. In Chinatown today there are clubs for immigrants and groups for American-born, but how can the two be successfully combined into one organization?In CPA, we have really worked at it recognizing that we are all Chinese and we all have a stake in fighting for a better community. For instance, the question of language is really important, from 1972-76, we ran a five-day after-school program for Chinese elementary school children to learn Chinese as part of bridg­ing the gap which develops when children go to public school. We offered English, Mandarin and Cantonese classes for adults. Today, we continue to offer Eng­lish classes on a greatly expanded scale to new immigrants and we encourage all American-born members to learn Chinese.

As for work with other community or­ganizations, we have some rich experi­ences as well. In fact, the coming together of CPA represented a conscious effort of unity by groups who shared the space in the I-Hotel basement at the time — I Wor Kuen (which later became part of the League of Revolutionary Struggle) and Getting Together newspaper, the Asian Women’s Health Team, Asian Legal Services, the Hsin Hua School.

The summer of 1972, before CPA’s official founding, over 100 people were in­vited down to chat and give their ideas about what the new organization should be.

Although there are many different types of groups in Chinatown, from con­servative to liberal, our work has shown that CPA will seek unity with any group based “on mutual respect and agreement on common aims and principles. Some­times we work together to achieve a single short-term goal, sometimes in a longer standing relationship.

CPA has also developed friends and ties beyond the Chinese community, based on the common problems that all minorities and working people face in the U.S. Whether helping our Mexicano friends to explain the grape boycott to Chinese shopkeepers in 1973, working with people of all nationalities to oppose the Bakke Decision in 1977, or inviting the Stearns Appalachian coal miners to speak at CPA in 1978, we have benefited through our friendship and ties with many kinds of progressive peoples.

This brings me to the question of what the future holds. No one can tell for sure, but what is for sure is that Chinatown will certainly change, and we will also have to change to meet new conditions.

In 1972 when we began, we were part of ushering in a new period for our commu­nity; the words “progressive organiza­tion” had a sharp and clear ring. The years from 1973 to 1976 were ones of rapid development in the community. CPA developed as a mass organization and other groups went various ways — some to social service, some to business with China, some to Democratic Party politics.

The period from 1977 to the present has been one of change for Chinatown, with over 125,000 new immigrants entering our community between 1977 and 1980. Through these periods we have had to stick to our purpose and principles, while at the same time bending and changing to meet and stay ahead of the times. This ap­proach will guide us into the future.

Although we will face hardships, I am sure that we will have another decade and then another of progress ahead. It is not easy for any organization to sustain, be vital, change and grow over three years, five years, and certainly harder for ten years, but CPA is still here and our mem­bership is growing. Our strength lies in our members and friends and in the continuing support of the community.

On our 10th anniversary, I hope we can move forward boldly and work even harder in times of economic, social and political hardship for our community, to serve the people and do our share to unite our community to fight for our rights.