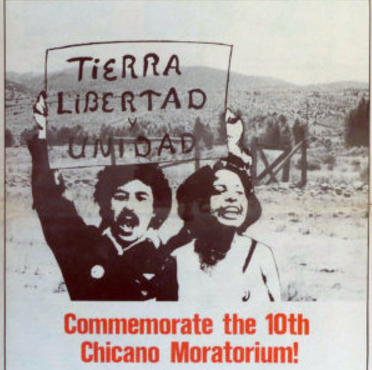 This August 30, thousands of people will march through East Los Angeles in commemoration of the 10th anniversary of the great August 29, 1970, Chicano Moratorium. That day, 20,000 people — the largest gathering of Chicanos in history — pro­tested the oppression of Chicanos in the U.S. and the Viet Nam War. This year’s march is a salute to that past struggle, and also a militant statement of commitment to oppose the continuing oppression of the  Chicano people.

This oppression has only intensified since 1970. Living conditions have deteriorated; education has become poorer, attacks on Chicano culture have stepped up — and now there is the threatened reinstatement of the military draft, reviving memories of the deaths and sufferings of thousands of young Chicanos who were forced to fight for U.S. imperialism in Southeast Asia.

In remembering the 1970 Chicano Moratorium and reviewing the situation of Chicanos today, many people are asking, what road for Chicano liberation?

The slogans and sentiments of many who will be marching this year point to the answer to this question — the Chicano people demand political power. The basis of the call for Chicano power is the de­mand for self-determination for the Chicano nation.

The source of the oppression of the Chicano people is the U.S. imperialist system that systematically suppresses Chicanos everywhere. The Chicano peo­ple form an oppressed nation in their areas of concentration in the Southwest United States.— a nation that originated in the brutal annexation of that territory by the Anglo-American capitalists in the 19th century. This land was stolen from Mex­ico, and its people were subjugated by force.

The Treaty of Guadalupe Hidalgo, signed by the U.S. and Mexico following the 1848 Mexican-American War, was never upheld or respected by the United States, particularly its provisions upholding the political and land rights of the Mexicans in the Southwest.

The Chicano people themselves are the product of this experience and the systematic oppression which followed from that time on. The Chicanos are peo­ple of Mexican ancestry who have been forged into a distinct nationality in the U.S. by the conditions of Anglo-American capitalist oppression. A Chicano is not just a state of mind or a question of self-identity, but a member of a historically-evolved nationality that has bitterly suf­fered in the U.S.

While the experience of this oppression in the United States forged the Chicanos as a distinct nationality, the common border with Mexico and continuing close contact with Mexico resulted in close bonds and ties between the Chicano nation and
Mexico.

Alongside their Chicano brothers and sisters, the Mexicanos labored in the same factories and fields, suffered the same racism, and were segregated into the same barrios as the Chicanos — in short, they suffered common oppression.

The constant immigration from Mexico to the Southwest over the past 100 years also reinforced the Mexican cultural roots of the Chicano people, further forging the bond between the Chicanos and Mex­icanos. Over time the descendants of the Mexican immigrants became part of the Chicano nation.

Thus the right to self-determination belongs as much to those Chicanos who trace their history in the Southwest back several years or decades, as it does to those whose ancestry dates back 300 years.

This process of immigration continues today. The Mexicano today faces common oppression with the Chicano; while at the same time the Mexicanos have particular concerns and struggles. They face la migra, they have even lower-paying jobs, and they face even greater cultural oppression. Naturally they maintain ties with Mexico, and some return to Mexico. At the same time, those who stay in the U.S. find their lives and fate intertwined with the future of the Chicano nation, and their struggles are an integral part of the struggle for self-determination. The Southwest belongs to them, too.

Does the right to self-determination necessarily mean that Chicanos should separate from the U.S.? No, although this is one option. The right of self-determination means the right to freely decide what to do with the territory which the Chicano people can rightfully claim as their own. To deny that right to the Chicano people ultimately rationalizes and surrenders to the Anglo-American an­nexation of the Southwest.

The demand for self-determination is a mass demand among the Chicano people. It is raised by revolutionary nationalists and communists as well as reform-oriented groups. There are different interpretations of self-determination, ranging from cultural identity to political representation, to Chicano business to community control

But these views all reflect the basic agreement that the Chicano people must have control over their own lives. Through the course of the struggle, it will become increasingly evident that in order to have real meaning, self-determination must mean political control over the destiny of the Chicano nation. Outside the South­west, Chicanos and Mexicanos in concen­trated areas must win some form of local autonomous political power.

Today going into the 1980’s Chicanos and Mexicanos are confronting escalating attacks in the form of police and migra raids, cutbacks, and worsening living and working conditions. In the Southwest, the fight to control the land is even more urgent due to the capitalists’ designs to turn the land into a radioactive waste dump.

Chicanos and Mexicanos from all walks of life are in motion around these issues. The Chicano people need a united front of all those who can be united to fight Chicano oppression.

The united front must include all the Mexicans who stay in the US. find their lives intertwined with the fate of the Chicano nation. different classes and strata of Chicanos who are affected by national oppression — in reality, nearly all Chicanos except for a tiny handful of big Chicano businessmen and sellouts like Leonel Castillo of the Immigration and Naturalization Service.

Building the Chicano united front in­cludes forging Chicano unity around im­mediate issues and reforms, but must also include and strengthen the Chicano peo­ple’s long range struggle for self-determination and liberation. Chicano communists and revolutionaries have a particular responsibility to build up the organized political strength of the workers and masses of Chicano people, in order to ensure that the united front serves the broad masses of people and riot just onesector.

Not to place the struggle around im­mediate issues within the context of the struggle for political power is to liquidate the revolutionary essence of the Chicano people’s struggle.

The united front of all Chicanos can be a mighty force; a force which is needed to break the iron grip imperialists retain over the Southwest and their myth that the U.S. is “one nation under god.”

Ultimately, the system of U.S. im­perialism itself must be overthrown and socialism established to achieve the libera­tion of Chicanos and Mexicanos and all the oppressed people in the U.S. The Chicano struggle is a component part of this revolutionary movement. Under socialism, there will be genuine equality and prosperity for all nationalities, and the right of self-determination will be guaranteed.

The struggle for the right of self-determination of the Chicano nation gives inspiration and encouragement to all revolutionary fighters opposing U.S. im­perialism. By upholding this right, the sup­porters of the Chicano people help to forge a militant unity against the common enemy.

Tierra, libertad, y unidad (Land, liberty and unity) — this great rallying cry captures the spirit of the demand of the Chicano people for self-determination. It is fitting that this slogan be raised this year on the 10th anniversary of the Chicano Moratorium. It is a call that will un­doubtedly be raised in a louder and loudervoice in the1980’s.

Self-determination for the Chicano nation!
Build the unity of the Chicano people
Viva la Raza!
Filed under: Unity by Eddie Wong
Comments Off on Commemorate the 10th Chicano Moratorium!