Commentary: Lessons from the battle for Japanese redress/reparations

Each year on February 19, thousands of Nikkei (Japanese Americans) and other nationalities gather at programs and rallies to mark the Day of Remembrance. This year’s activities will bring out once more the demand for redress and reparations for the racist incarceration of over 120,000 Japanese Americans by the U.S. government during World War II. Because thousands of Nikkei have spoken out in public, rebutted the racists in the media, demonstrated and organized, the issue of redress and reparations has attracted national attention.

The League of Revolutionary Struggle (M-L), a multinational communist organization with a long history of work in the Japanese national minority, is proud to be a part of this historic movement. While the campaign is far from over, it is important to summarize and sharpen some lessons gained in the past two years of organizing. In particular, the campaign has taught us many lessons about conducting
united front work – lessons we would like to share with comrades in other struggles and with activists in the redress/reparations movement.

The necessity of building a broad united front to win redress and reparations became clear from the start of the campaign. On one hand, Nikkei demanded monetary payment, a community fund, and the overturning or legal decisions which legitimized the camps. These are all reform measures which should be supported by the entire multinational working class and all progressive people who stand for justice and equality.

On the other hand, there was the target of the campaign: the U.S. government, which has opposed reparations for the losses caused by the internment. It would take a nationwide movement with massive public education and organizing among all sectors of U.S. society to put pressure upon Congress to pass redress measures.

Within the Nikkei community, there was ample basis to form a united front to fight for redress and reparations. The incarceration affected all classes within the Japanese national minority, for it amounted to nothing less than the total uprooting and exile of the West Coast Japanese American population into concentration camps.  Ever since the closing of the camps, there has been sentiment for redress expressed by Nikkei working people, small business people, farmers and professionals. There would, of course, be differences among the various classes about how to conduct the campaign, but there was still basic unity around goals.

The overwhelming majority of the Nikkei community demanded some form of direct, individual monetary payment, a community fund and legal redress.

The League worked actively on the issue of redress, conducting education in UNITY, discussing the issue in forums and within the labor, student, international support and other oppressed nationality movements. We also became directly involved in the heart of the campaign organized by the Nikkei community. 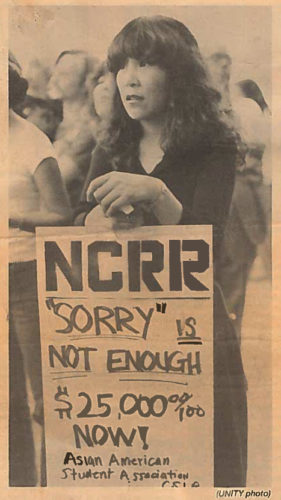 orked with other activists to form the National Coalition for Redress/Reparations  (NCRR). At the 1980 founding conference, there were many different organizations and individuals: progressive mass community organizations such as the Little Tokyo People’s Rights Organization and the Japanese Community Progressive Alliance, members of social service organizations, progressive religious groups like the Agape Fellowship, the Asian/Pacific  Student Union, the League of Revolutionary Struggle (M-L), striking workers from the Japan Food Corp., and members of other redress organizations. Today, the NCRR has over 1,100 members in a network of 40 organizations in New York City, San Francisco, Sacramento, San Jose, Los Angeles, San Diego and individual supporters in many other cities. The NCRR  is widely respected as a democratically run mass coalition which fights militantly for redress/reparations.

The NCRR, a mass coalition with individuals of various class backgrounds, has made significant contributions to the redress movement. It recognizes that organizing the masses  is key to winning redress and reparations, as is building a broad united front. At the same time, the NCRR, itself, is not the entire united front, which is an objective alignment of class forces working towards a common goal against a common enemy.

In addition to the NCRR, there were other organizations such as the Japanese American Citizens League  (a 30,000-member civil rights organization), the National Council for Japanese American Redress (NCJAR), and other local groups all working toward some form of redress and reparations. Many of these groups reflect the class outlook of the Japanese American professional and business sector (petty bourgeoisie). Because there are different classes represented  in the united front, there is bound to be struggle as well as unity.

For instance in the past, some NCRR activists have expected groups like the JACL to be as militant as the NCRR, which includes more working class forces. And when the JACL behaves in a sectarian manner toward other groups in the redress movement, these activists initially tended to write them off  forever and not want to work with them.

This anger is understandable. The League recognizes that the JACL leadership reflects a petty bourgeois class outlook. They tend to vacillate on  the demands, try to tone down the mass struggle, and preach reliance on politicians to strike the best deal for redress. This is howthis class sees making change. the JACL leadership has  even wavered on the progressive sentiments of its membership, which originally authorized it to pursue a direct monetary payment bill. Many of these actions have been criticized by the League and by other redress activists.

However, it would be a mistake to be inflexible towards the JACL and take a go-it-alone attitude. For as long as the JACL continues to support redress demands, although we may disagree about particular tactics, the JACL is an ally in the overall united front. The task for communists and progressives is to continue struggling for unity of action, and to keep open channels of communication while raising disagreements.

Because the various forces are part of one motion toward winning redress, there is much work which can be mutually supported. Such unity has taken the form of sponsoring joint programs among the various redress organizations. NCRR and JACL have supported legislation to grant back pay and reparations to fired Nikkei state and local government employees.

Finally, while there should be unity within the united front, different forces maintain their right to independent action. If the masses had followed JACL’s lead in organizing for the 1981 Commission on Wartime Relocation and Internment hearings, for example, they would have ended up playing a minor role in favor of testimony by psychologists,  historians, and what the JACL termed “experts.” This would not have been effective in showing the overwhelming mass sentiment for reparations that exists. Instead, the NCRR played a major role  in organizing the masses to speak out boldly for monetary compensation. This shaped the militant character of the hearings.

In the coming months, these lessons about unity and struggle – being principled, yet flexible – will be very relevant. The NCRR, the JACL and a Seattle redress group are each developing a bill for Congress. The League believes that it would be in the best interest  of the redress movement for there to be one bill. This redress bill should insure that there be substantial individual payment and that this be the basis for the groups to work out a compromise on the method of payment. Secondly, on the question of a community fund, we believe that the basic concept of some measure of community control over the funding board be acknowledged. Achieving this unity will be complicated. It will involve compromise by each group on certain points. All parties will need to keep in mind the best interests of the masses of Japanese Americans.

For the League, one of our tasks in the next period will be to bring out even more the links between the redress issue and the overall question of national oppression and inequality of Japanese Americans.  Even if Nikkei win $25,000 each, we still need to struggle against racism and inequality. We need to create a united front of all classes who suffer national oppression to struggle consistently for our rights. And, over time, we must win the masses over to see the need for socialism. For only socialism can eliminate class exploitation, national oppression, and allow Nikkei and other oppressed, nationalities to fully develop on an equal basis.

June Hibino is a member of the League of Revolutionary Struggle (M-L) which has been active in the NCRR.

Boston – The Asian American Resource Workshop will sponsor a program on Feb. 19 at 2:30 p.m. featuring singers Siu Wai Anderson and Hiroshi Murphy, and a film. The workshop is located at 27 Beach St. in Chinatown.

Sacramento – The NCRR and Florin JACL will hold a program on Feb. 19 at 7:00 p.m. at the Florin Buddhist Church, 8320 Florin Rd. Speaking on legislative strategies will be John Tateishi of the JACL and
Steve Koyasako of the NCRR.

San Diego – The San Diego Redress / Reparations Committee and JACL will sponsor a program on Feb. 20 at the Buddhist Church, 2929 Market St. at 1:30 p.m.

Los Angeles – The NCRR and Southern California Regional JACL will cosponsor a candlelight march and rally on Feb. 19 at 5:30 p.m. Meet at the Old Nishi Church (1st and Central streets). Followed by a program at Koyosan Buddhist Church, 342 E. 1st St.

San Francisco -The Bay Area Day of Remembrance Committee will hold a program on Feb. 19 at 1:30 p.m. at Christ United Church in San Francisco and a program at 7:30 at the Jefferson School in Berkeley. Both programs will feature speakers and cultural performances.