Creative strategies to keep steel jobs in the Monongahela Valley

PITTSBURGH — Anyone who thinks the economy has ‘’bounced back” from the terrible recession need only spend a few days in the steel districts of Pennsylvania’s Monongahela Valley to learn otherwise.

Throughout this once bustling valley, jobless rates hover at about 25°7o in most towns. Giant mills lie rusting and abandoned by steel companies seeking fatter profits elsewhere. People who worked all their lives to make corporations like U.S. Steel rich have been cast aside. Many have lost everything, and a desperate few have been driven to suicide.

But this situation has not gone unchallenged. Workers and supporters are organizing in creative ways to bring back jobs to the empty mills and factories. 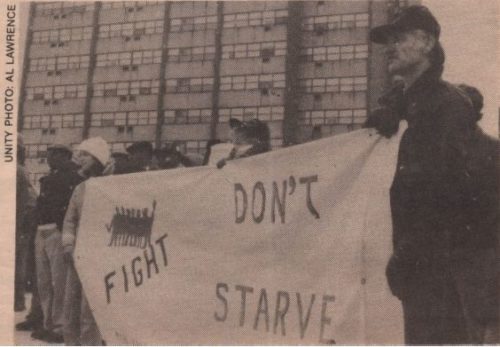 The Tri-State Conference on Steel is a coalition of union and community activists, clergy, academics and public officials. Tri-State argues that the profit motive is destroying U.S. steelmaking capacity at a time when steel is badly needed to repair the nation’s highways, sewers and water systems. “Since private industry will not rebuild our steel industry,” says Tri-State, “the workers and communities of the Mon Valley must be allowed to do it.”

The “eminent domain” laws allow government to take over private property for public purposes. Tri-State wants local communities to use that power to take over abandoned mills, turning them over to a locally controlled, federally funded “community corporation” called the Steel Valley Authority (SVA). The SVA, made up of labor, community, business and government representatives, would run the mills.

The immediate task is to save the blast furnace at U.S.Steel’s Duquesne Works, which is facing demolition. According to Jim Benn of Tri-State, “The future of other mills in the Mon Valley is linked to what happens at Duquesne. No other furnace can provide finishing mills such as Homestead Works and National Works at McKeesport with enough semi-finished steel to keep them running.” Tri- State has already gotten a feasibility study that showed Duquesne Works can be run profitably. It has twice forced U.S. Steel to delay tearing down the mill while the community takeover campaign proceeds.

Tri-State’s overall strategy is ambitious, implicitly challenging private ownership of the steel industry and raising worker-community control as a viable alternative. It forces the struggle into the national political arena by demanding a federal commitment to buy steel to rebuild the country’s infrastructure. In the Mon Valley, where whole communities are suffering because of a few giant corporations, there is a basis to unite many class forces around Tri-State’s approach.

Unfortunately, lack of unity between Tri-State and other unemployed groups, the lack of active worker input into Tri- State, and the resulting lack of strong, broad support have made Tri-State less effective than it could be.

The Denominational Ministry Strategy (DMS) is a group of local Protestant clergy, moved to action by the suffering which 25% unemployment has inflicted on their congregations. The DMS and the coalition it spawned, the Network to Save the Mon/Ohio Valley, target Mellon Bank and U.S. Steel in their drive to stop big business from abandoning basic industry in the area.

DMS/Network tactics have included putting dead fish in Mellon Bank’s safety deposit boxes, picketing homes of corporate executives and spraying skunk oil in a church where the executives worship. The church actions were meant to confront the executives responsible for high joblessness and expose church officials who refuse to condemn ‘corporate evil’.

“They used to call strikes counterproductive too. Our union was built on confrontation. We could go around the country talking about unemployment in Pittsburgh and no one would pay much attention, but dead fish in the banks brought attention from around the country.”

DMS tactics mirror the anger and frustration of jobless workers more closely than Tri-State’s careful united front approach. But they do not encourage mass participation, either. The DMS/Network believes it can win victories with a small number of dedicated fighters. Its rigid outlook discourages tactical alliances. DMS ministers distrust communists and shun work with politicians, who they believe are ‘corporate puppets’. Taking a purely moral view, they don’t analyze why corporate decisions are made and what it will actually take to change them.

While DMS tactics have brought needed attention to the problems of the area, it does not appear that this approach, by itself, will be able to deal with the basic problems in the Mon Valley.

Unlike DMS and Tri-State, the Mon Valley Unemployed Committee (MVUC) is a grassroots group. Its successful fight to stop home foreclosures in the area two years ago put it in the forefront of the unemployed movement, locally and nationally. But MVUC has kept its focus narrow, believing this will attract the broadest range of worker support. It concentrates on immediate demands and is increasingly viewed mainly as a service group. MVUC is campaigning for more state funds to help subsidize utility costs for low-income people, and extension of federal unemployment benefits. It also provides services and referrals to jobless workers.

But the movement in the Pittsburgh area has moved beyond the survival needs of the jobless. It is taking up the underlying problem of corporate investment decisions, why they are made and what can be done to oppose them. MVUC’s failure to address these questions has unnecessarily narrowed the workers’ fight and rendered its own role less significant.

Many workers UNITY spoke to appreciated MVUC’s services. But these same workers also feel the need to go beyond the immediate issues of unemployed relief. They want to attack the disease, not just the symptoms.

In the Mon Valley, we can see creative approaches to some of the major problems in our society: shutdowns, major dislocation of industrial workers, extended unemployment and impoverishment of whole communities. The three main approaches all deserve support. But it also appears that the broad worker participation and leadership, which are critical to the struggle, are lacking.

The three groups have been unable to work together and are often sharply at odds. In fact, as the struggle in Mon Valley has grown, the political questions are more complex and the bickering and sectarianism have increased. This reflects the weakness of working class leadership in the area, and the subjectivism and immaturity which still characterizes much of the U.S. left. There is a tremendous need to struggle over differences in a principled way and develop at least a minimum program for working class struggle around which the left and all progressive people can unite.