When was the last time you saw a comedy/satirical act that had you laughing hysterically? Laughing ’til your cheeks ached from grinning and the tears came to your eyes?

That was me when I caught Culture Clash’s new comedy, “Bowl of Beings,” which opened at San Francisco’s Asian American Theater Center and played from May 10-27. 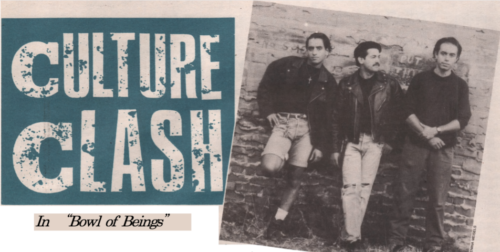 Culture Clash is a group of San Francisco-based actor- comedians who use their creative genius to express the Latino/Chicano experience. Ric Salinas, the heartbeat of the group and a pathological liar; Richard Mon­toya, a Jewish comedian trapped in a Chicano’s body; and Herbert Siguenza, who claims to be only using comedy as a stepping-stone until he reaches a Broadway stage, have been performing as Culture Clash since Cinco de Mayo, 1984. They have successfully brought their brand of humor through­out the U.S. and internationally (Tijuana, Mexico) as well!

This run of “Bowl of Beings” was Ric Salinas’ comeback to the group since he was shot trying to break up a street brawl in front of his Mission District home.

In “Bowl of Beings,” they rapped, they danced, they shared funny and poetic monologues, they brought Che Guevara back to life with a rubber chicken and a cab­bage patch doll. They performed insightful comedic skits and hilarious, zany skits.

The wildest skit was the “Yo Frankie Show,” a Chicano takeoff on “The Arsenio Hall Show.” If you’ve seen any talk show, whether it’s Connie Chung or David Letterman, you’ll be amazed how Culture Clash has captured this caricature to perfection!

But don’t think you’ll leave their show simply smiling. The political satire of “Bowl of Beings has the ingenious blend of humor mixed with progressive insight that not many entertainers can pull off. Their humor is profound.“Bowl of Beings” was a pleasure to see, too fun to miss. Take it from someone who’s seen it … twice.

Luna Salaver-Garcia is a free-lance writer, photographer, and poet from San Francisco.