The recent criminal attacks by the South African fascists on the African “frontline states” of Zimbabwe, Zambia, Botswana, Angola, Tanzania, Mozambique not only indicate the desperation of the white supremacist regime, flouting international opinion in an arrogant Nazi-like fashion. The fact that this raid uses Reagan’s Hitler-like attacks on Libya as a justification, despite Washington’s official “outrage” at the Boers’ bombings, is the foulest of “gallows humor.” But in truth, South African apartheid and the chattel slavery that characterized black life in the U.S. are cut from the same fabric of human misery. 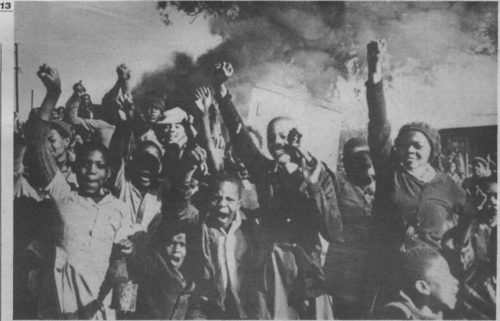 The bombing and South Africa’s open challenge to the African states of war is clearly a policy issuing from or not so secretly justified by Reagan-led U.S. imperialism. The U.S. invasion of Grenada, its threats to Nicaragua and intervention in El Salvador, its bombing of Libya set the tone for imperialism the world over, but also show the Reagan sector of U.S. imperialism to be the main danger of imperialist war in the world today and the principal enemy of the world’s people.

Historically African slavery and colonialism (and the conquest of India) are the basis for the development of European capitalism and the industrial revolution. So that to see the two chief running dogs of U.S. imperialism, Israel tyrannizing northern Africa and South Africa tyrannizing southern Africa, is actually part of the historic political and economic continuum of capitalism and imperialism.

Africa is still the “warren” (animal cage) of black slavery that Marx pointed out which fed primary capitalist accumulation and development. White supremacy is still a basic and permeating element of imperialism.

The raids are meant to destabilize the African countries most supportive of the black freedom struggle, not just pursuing ANC. The bombings were, in fact, only successful at murdering some South African refugees and hardening world opinion against the fascists, but will do nothing to stop ANC or the other anti-apartheid forces pummelling the Boer-led government.

South Africa was a fascist state vis-a-vis its majority black population before last year’s state of siege was declared. But almost every other week new more extreme fascist racial-oriented laws are put in place as desperate measures to stop the black liberation juggernaut that will smash apartheid and its bearers.

What forces such desperation is that the Boers are caught between the devil and the deep blue sea in a very literal manner. British and U.S. based corporations are shrieking that apartheid must go (like it did in the U.S. in 1954, only 32 years ago!) Now to save their megabillion investments and profits, even Anglo American mining’s Harry Oppenheimer has assumed the role of spokesperson for the big capitalists in chiding the Boers for their intransigence because the Boers are in the main still rooted in the running of the large plantations like their U.S. slavemaster counterparts. They also control the government bureaucracy, but the corporate power is still mainly British and U.S.

So that Botha and his Boers are trapped between ever rising liberation fervor from the Africans and the demand for stability from the corporate masters. (In some ways it is a replay of the Boer War which gave the Afrikaners juridical control over the South African state.)

The bombings indicate as well that the anti-fascist South African conflict has reached another level of struggle. A level of struggle connected inextricably with the international period of anti-imperialist struggle in general.

At the same time, the contradiction between the two superpowers has dangerously escalated, casting a shadow over the world and increasing the danger of world war and domestic fascism.

The U.S. in contending with the Soviets, sees “commies” in all liberation struggles or movements for national independence or sovereignty. But their contention with the U.S.S.R. is real, however bizarre the Reagan sector’s Red Scare bleatings. They are both contending for markets, new spheres of influence, resources and raw materials, etc. The only reason that the Reagan sector of the bourgeoisie, clearly part of the most chauvinist and imperialist sector of finance capital, could get elected in the U.S. is because of the desperation of U.S. imperialism in general, backing up all over the world from the pressures and contraction of their markets due to national liberation struggles, contention with the Soviet Union and sharper competition with the Common Market countries and Japan.

Both Israel and South Africa, two bloody settler colonies, have had to intensify their repression of the colonial peoples they imprison and murder because of the same factors.

Reagan’s bombing of Libya, carte blanche support for Israeli fascism, including backing the massacres in Lebanon, and their “constructive engagement” outright support for South African Nazism, indicate the unquestioned connection between the extreme rightist imperative of U.S. imperialism and its chief running dogs.

The rapid neo-fascist motion of U.S. imperialism and its cohorts is masked as best as they can manage. With the openly colonial fascism of Israel and South Africa it is almost impossible to mask except for those already convinced of imperialism’s “nobility” for whatever reason, usually outright profits or racial and national chauvinism.

The method of covering the fascist motion is to highlight smaller even more extreme sounding sectors of the Nazis as the real fascists. So that in El Salvador, D’Aubisson masks Duarte, so Duarte seems moderate. One sector of the murderer contras is hoisted to make others seem moderate. The Begin-Peres-Shamir fascists are masked by the bilious racism of Rabbi Kahane. And now in South Africa, bloody Botha is to be rehabilitated as a Reagan “moderate” by the Broederbond and Terre Blanche (white land). In the same way that the white patriarchs and Klan are supposed to make Reagan seem moderate. In truth they are all part of the neo-fascist arch-chauvinist wave rooted in U.S. imperialism’s steady collapse. The U.S. is richer and more powerful, still a bourgeois democracy domestically so the outright fascist policies are only open in relation to the African American people and other minorities, though Reagan has attacked the whole fabric of bourgeois democracy. Internationally however the Reagan sector is committed to a jingoistic policy that would warm Hitler’s heartless chest.

The key to the present level of the South African revolution rests squarely on the black South African working class! The attacks by the masses of peasants and students on apartheid are critical, but the proposed general strike where potentially the uranium, gold and diamond miners and other workers in strategic minerals and industrial and manufacturing workers would go out, would bring the white supremacy fascist apartheid regime to its knees.

The Boers cannot allow this to happen. The South African economy, ailing largely because of apartheid’s limitations on its developing workforce plus the African people’s resistance, would be totally disrupted by such a strike. There are neither the number of trained workers necessary nor do the Afrikaners have the ability to take up these jobs, especially in the mines. The rand has already plummeted although artificially propped up by the British and U.S. governments, but the other sectors of monopoly capitalists want “real” stability, not artificial sunshine.

They want neo-colonialism, and to do that it is obvious that the Boers would have to give up control of the government bureaucracy, even for a cosmetic change! Hence the sharpening contradiction between state bureaucracy and corporate power. Hence the veiled threats by the Boers to take over foreign imperialist firms and the yowls for more blood from the Terre Blanche Klan, as with the Kahane Klan.

The support for anti-imperialist and revolutionary struggles in Africa (north and south) and in Latin America are key links to opposing the fascist trend that accompanies the rising tide of world imperialist war. South African fascism as well as Israeli fascism must be smashed. South African fascism is truly on its death bed. It is the weakest link in the world imperialist chain, and as Lenin taught us, that’s where revolution will occur. But we cannot be deceived by Reagan’s characterization of anti-fascist struggles as terrorist and lessen support for imperialism’s enemies, no matter that we cannot agree or condone every aspect of the combatants’ line. Just as we must oppose sectarianism in the South African struggle and support all who are opposed to apartheid and call for and be a leading part of the world anti-fascist united front of which the South African united front is the most critically important part.

Botha and company have now banned all meetings and demonstrations, aiming to stop the June 16 Soweto memorials and the impending general strike. This means even larger explosions are coming! More repression and more resistance! But the death of South African fascism will halt Western imperialism’s recent aggressiveness on one hand, but make them even more desperate on the other. The emergence of a popular united front not only in South Africa but internationally would have the effect of muting direct superpower contention by creating a buffer of independent South Africa controlled by neither the U.S. nor the U.S.S.R. It is a “consummation” not only “devoutly to be wished,” but to be fought for as well in South Africa, in the United States and the world over.