Death to Apartheid! Power to the People!

In solidarity with the black South African workers’ struggle!

“The black workers in South Africa are the key to the successful completion of the current South African revolution, that is, of reaching the goal of Death to Apartheid!” 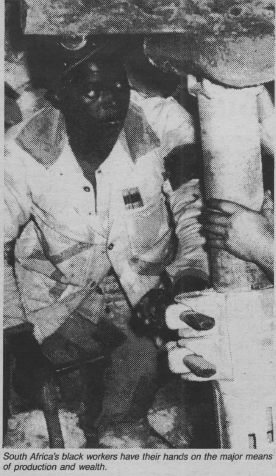 August 25 marks the turning point in the struggle of the black South African masses to liberate themselves. This is the day that largely black African gold miners were supposed to begin their “stay-away” from the giant mines that are the lifeblood of the South African economy.

Deliberations are taking place as to when this action would begin. There is also some indication that other critical sectors of the South African mining industry — uranium, diamonds, copper, iron, coal, all overwhelmingly worked by black miners, may also go out.

The trade unions are in the main squarely behind the workers, and even though black membership in trade unions is veritably illegal, just as they are forbidden to vote, the black trade union movement in South Africa has accelerated at high speed. This is an indication of the unquenchable thirst for democracy, fiercely ubiquitous among the South African people, which is revolutionary and antiimperialist. It is also an indication that the black South African working class has reached a stage of maturity where it sees its self-organization as fundamental to its continued and most positive development.

At the same time, the gigantic profits drawn by the multinational corporations out of South Africa exist because of the slave-low wages, and inhuman conditions black Africans endure in South Africa.

The black workers in South Africa are the key to the successful completion of the current South African revolution, that is, of reaching the goal of Death to Apartheid! Power to the People!! Unrest has animated the whole African people in South Africa, of all classes, and involves progressive sectors of all nationalities in this fight against colonialism and fascism (and “normal” apartheid and more so its “emergency measures”),

But the unrest in the black townships and among the black farmers across South Africa, while critical to the intensifying revolutionary process, ultimately depends on the black South African working class! There are now 7.5 million employed black workers out of a population of 23.9 million. There are only 4.9 million whites in South Africa.

Now with 7.5 million black workers, 350,000 are unionized in the key industries of South Africa — particularly gold mining upon which South Africa’s rapid industrialization has depended, because it is the economic standard of imperialism, as well as the strategic (war-making) mineral uranium, plus diamonds, copper, iron, etc. South Africa has the world’s largest stores of gold, uranium, coal, copper, chrome, platinum — all controlled by, and as the central part of, an enormous empire owned by South Africa’s DeBeers, the Anglo American Corporation, and an international network of imperialists made up of the U.S., British, French and German investor-owners.

The African workers are revolutionized by both the superexploitation of their labor as workers (which depends on their “race” to the extent that racism exacerbates, makes even fouler, the “normal” exploitation of the worker by the capitalist), and the political struggle for power for the whole of the black masses, particularly the black working class. The black farmers in South African economy are mostly low-“paid” unskilled workers working on large white plantations (one third of the African population), and for foreign-owned agribusiness.

Aside from their control of the state mechanism, and the wealth it can generate for its owners, and control of the jobs and projects and institutions the white-only government service bureaucracy can generate, the main source of wealth for the Boers (Afrikaners) is control of the land\ A land made super-profitable by feudal-slave labor, rendered semi-stable socially by Boer state fascism.

But the workers have their hands directly on the major means of production and wealth in South Africa! The black workers are now in a position to bring South Africa to its knees, that is, to make and lead a revolution! A revolution that must minimally obtain democracy and self-determination for the African majority, a revolution waged by a revolutionary democratic united front (composed of all the classes in South Africa who help smash apartheid-colonialism), but led by the black African working class in alliance with the peasants and progressive petty bourgeoisie!

The struggle against colonialism in South Africa is so important internationally because in South Africa rests the secret of white racist western imperialist world control! Gold!! and Nuclear Weapons!!!

A western style bourgeois democracy is impossible in South Africa because the fascist state has suppressed not only the black masses, but has retarded the development of a black bourgeoisie bulky enough economically and politically to pretend to run a neo-colonial (U.S. and Great Britain dominated) negro state.

This is why the South African revolution must have as its goal at this stage a People’s Democracy, meaning the smashing of the fascist apartheid colonial state and its social, political, economic and cultural structures and relations, and the creation of a popular democratic state controlled by the black working class, in alliance with their most important allies, the black peasant masses and urban middle classes!

This would mean a united front of all the democratic forces making revolution in South Africa today, led by the black workers. It would mean the nationalization and state control of the major industries, banks and institutions. Particularly the gold and uranium industries, mining in general, large manufacturing, and other key sectors of the economy.

It would mean the nationalization and redistribution of the land to the black peasants, and the use of modern industrial techniques to bring the black peasants into the 20th century, as well as make the land more fully productive; able to feed the South African people and raise the social level of blacks in the continent of Africa.

People’s Democracy must mean full and widespread democracy for all but the fascists, the multicolored lieutenants, the big imperialists, traitors and outright reactionaries.

Such a state, its politics and economics, would be a preparation and transition for the development of socialism. The period of transition and the nature of that transition can only be defined, plus or minus, by the level of real organization and scientific revolutionary consciousness guiding and in the objective lead of the revolution.

The black workers have begun to blaze the path of revolution. By bringing the whole of the South African economy to a halt and beginning to mobilize objectively the whole of the African masses and international opinion behind their leadership.

Democracy, self-determination and power to the people!!