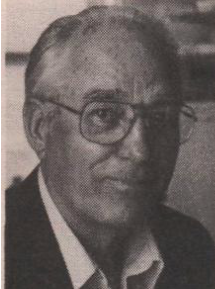 The grim countdown is on for tallying up the consequences of one of the most widespread and destructive droughts in our history. The drought touches every one of the 48 mainland states and a great deal of Canada. In many areas, much of the crop has been lost and the hay and pastures are bare. The ultimate damage is yet to be determined by the heat and amount of rain through August. Market prices for feed grains, soybeans, oats, and other commodities have never been more volatile. The Chicago Board of Trade has become a Las Vegas gambling casino. Farmers are caught on the horns of a dilemma. If they raise no crop, their zero production times $5/bushel equals zero. If the weather returns to normal and farmers have a bountiful harvest, they will have big production and low prices. This combination during Reagan’s administration drove 650,000 farmers off the land. The consumer will see higher prices either way. From 1980-87 farm prices dropped 50% and food prices went up 36%. ConAgra increased its profits by 513% from 1980-87 — agribusiness continues to thrive regardless of the farmers’ plight. Government agricultural policy is critical in preventing another mass exodus of farmers because of the drought. Reagan’s first Secretary of Agriculture, John Block, said he hoped for a crop failure to solve the problem of overproduction, and David Stockman stated, “farmers are producing too much, so we have too many farmers.” It’s not surprising that Reagan and his current Secretary of Agriculture, Richard Lyng, suggest praying for rain as a solution while crops burn up and consumer prices rise.

Reagan and Lyng do chores for agribusiness

Just who benefits from this Pollyanna attitude is an important question. According to USA Today, “Del Monte Corp. and Green Giant Co. today raised wholesale prices on topselling vegetables.” In some areas canned goods cannot be bought by the case because of the fear of shortages. Unnecessary consumer price gouging is feared by many. Jim Hightower, Texas Commissioner of Agriculture, along with commissioners in seven other states, have begun monitoring local food prices to see whether agribusiness and the food chains are profiteering from the drought. Secretary Lyng and the USDA are serving the interests of big business in another major and frightening way. They are administering a record rate of sales of government grain reserves in the face of this disastrous drought. During the first five months of 1988, the government moved 1.2 billion bushels of grain and soybeans onto the market, at a rate of 57 million bushels a week. This could be one of the colossal blunders of history. Selling off our food security in the middle of a major drought is tantamount to cutting the fire hose while fighting a fire. Hightower accuses the Reagan administration of liquidating our stocks of grain to the benefit of the grain traders, such as Cargill and Continental, “so they can sell it abroad and make a very fat profit.”

Justice for farmers and consumers 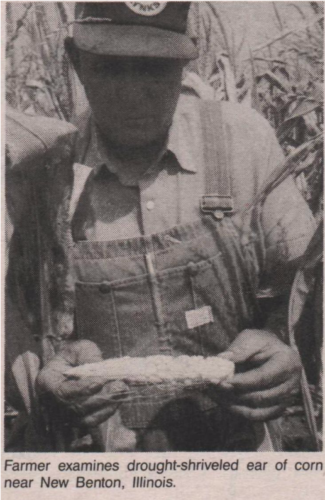 Preparing for a drought is similar to preparing for any other disaster. Assume the worst can happen and prepare for it. Harvest what you can. Conserve. Have a reserve and guard it with care. Food, livestock feed, water, and other necessities to weather a drought are invaluable. Many cultures, considered
“primitive,” save in the good years for the lean years and do not deplete their reserve for short term profit. Most of the steps taken by the administration, such as opening up set aside acres and the Conservation Reserve acres for haying and grazing, have been too little, too late. The quality of hay and pasture was greatly compromised by unnecessary delay. The promise of bipartisan legislation to aid farmers with money which would have been used to bail out farmers for low prices due to surpluses, shows a lack of comprehension for the magnitude of the drought. Startling reports by some leading weather experts and climatologists suggest we may be seeing the beginning of the climatic changes of the greenhouse effect, caused by the buildup of carbon dioxide and other gases in the atmosphere. The 1980’s have already had the four hottest years on record in the past 130 years. But however long the drought lasts, farmers should not be jeopardized and consumers should not have their food security threatened. Present policies are made by agribusiness to buy raw materials cheaply from the farmer. Free-market agriculture means that consumers must be hungry before farmers can receive a good price. Under this policy, abundance may mean more farmers will go out of business. In response to this disastrous agricultural policy, farmers around the country developed the Family Farm Act which would provide for supply management and would set initial price supports at 70% of parity. The 1985 Farm Bill failed to incorporate this legislation. Had Congress passed the Family Farm Act, which prophetically called for the creation of disaster reserves for farmers, the drought would be containable. In the event of a disaster, affected producers would receive commodities from the reserve equivalent to 90% of their marketing certificate, less the amount actually produced. A disaster reserve is important, not only to farmers, but to the nation’s food security as well. Now is the time to raise the banner of the Family Farm Act again. The current economic insecurity faced by U.S. farmers and consumers is due to unjust agricultural policy more than the drought. Our problems are the result of policy decisions by those who own the political power, the 5% with the money. We must organize the 95% who represent people power, including farmers and consumers. Together we can stand up against the failed agricultural policies of the past, and save the family farm for the benefit of all.

In addition to the primary demands for adequate prices, supply management and a disaster reserve, it is extremely important that farmers fight for and win demands for immediate drought relief, like those adopted by the Executive Committee of the National Save the Family Farm Coalition. Highlights follow:

• Disaster declarations must be made immediately to enable the use of all programs.

• 1987 deficiency payments must be made immediately.

• The 50-cent cut in dairy price supports must be reinstated and dairy support prices must be indexed to reflect increased feed costs.

• Feed assistance programs should be implemented to maintain breeding herds.

• Direct relief should be provided to non-program crop farmers and livestock farmers.

• A moratorium on loan payments, foreclosures and repossessions should be implemented in relationship to drought loss.

• There should be no government off-sets of drought relief payments.

•Haying and grazing should be allowed on CRP ground with waiver of the 25% penalty.

• Haying and grazing should be allowed on FCS and FmHA inventory land.

• Pressure the local and state ASCS personnel through meetings and phone calls to use available programs and to get disaster programs.

• Demand your Congresspersons and Senators pass the Family Farm Act.

• Express your opinions through letters to the editor, radio call-in shows, and other public events.