ALBUQUERQUE,  NM.- Activists gathered here from throughout the Southwest to form a net­work to fight for environmental issues that affect low-income and minority communities. 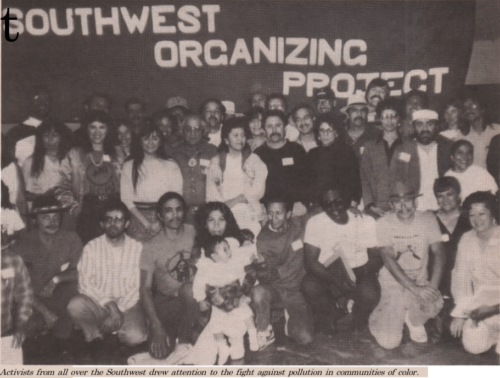 Setting the tone in her opening state­ment, Jeanne Gauna, co-director of SWOP, stated, “Environment is an issue of social and racial justice.”

This gathering was organized partly due to the lack of support from “traditional” en­vironmental organiza­tions who call them­selves the “Group of 10.” These groups, who raise multi-million dollar budgets (even receiving money from polluters such as Dow Chemical and Exxon), channel very little money into low-income and minority communities.

“This conference is being accused by the environmental groups as being divisive. There is no hidden agenda. There is a call for unity,” said SWOP co-director Richard Moore.

Moore pointed out that organiza­tions like SWOP identify themselves as fighting for economic and social jus­tice, and do not call themselves envi­ronmentalists, yet they have been fight­ing for environmental issues. SWOP, for example, has been fighting toxic pollution in Chicano neighborhoods of Albuquerque, but has also done voter registration drives and taken up other issues of social justice. Many tra­ditional environmental groups tend to focus on endangered species, national parks and preserves, animals,. and plants, and not on low-income or minority communities.

Father Luis Pena from San Jose parish in Albuquerque stated that “do­ing this (toxic pollution) to the heart of the community does something to peo­ple’s self-esteem and spiritual well ­being. We want our self-esteem and self-respect in a just kind of way.”

The conference ended with enthusi­astic agreement to maintain a network with the SWOP at its lead. The State­ment of Unity declared: “We are a mul­ti-national, multicultural network whose focus is to address the fact that com­munities of color, as well as economi­cally oppressed communities, suffer disproportionately from toxic contam­ination. We are deliberately targeted through genocide of indigenous peo­ple, racism, sexism, and lack of eco­nomic and social justice.”