LOS ANGELES — Sonia Galan sat in the living room of the small one-bedroom house she shares with her husband and 11-month-old daughter in the barrio of El Serena. Nearby were her daughter’s crib and a secondhand sewing machine.

During much of her pregnancy and her daughter’s first year, she worked here from 8 a.m. to midnight, 7 days a week, sewing dresses for a local company called Emerald Street. She was paid $3-8 a piece for dresses selling for $250 each. 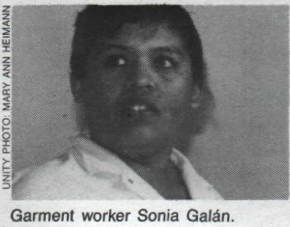 Galan spoke with Unity after testifying at one of several U.S. Labor Department hearings on industrial homework. The hearings were demanded by the International Ladies’ Garment Workers’ Union (ILGWU), which is fighting a Bush administration move to lift the 47-year-old ban on contracting out garment piecework to women working at home The practice, already rampant in the garment industry, brutally exploits thousands of mostly Asian and Latino immigrant women.

Galan fled El Salvador in 1981. She made her way to Los Angeles, where the billion-dollar garment industry is booming, and worked in an ILGWU-organized sewing factory until it closed in 1986.

The new immigration law kept her from finding other factory work. “Now you have to have papers to get a union job. So I decided to work at home.” With a baby on the way, she also hoped to save on child care.

But only her employers saved money. She worked 90 hours a week, often remaking dresses without pay when the company changed styles. If she missed a deadline, her pay was cut in half.

“I didn’t get overtime,” she said. “I would take 80 dresses at a time. … I had to clean them, iron them and hang them on a rack in my kitchen for no extra money.”

She had to cover her own expenses, buying and repairing her machine, and paying $35 a month extra on her electric bill. Lint and dust filled her house, but she had no medical coverage.

The Bush administration says legalized homework will help women with child care problems. But Galan replies, “I could not watch my baby while I worked.”

Celia Barragan, another witness at the Los Angeles industrial homework hearing, stated that children often end up working alongside their mothers. From the time she was seven, testified Barragan, “My mother, my father, my sister, my brother, and I all worked at home … sometimes until 11:30 at night. My mother would stay up even later. … The noise of the sewing machine would wake us up in the middle of the night.”

The Reagan administration worked for eight years to legalize homework. Bush is picking up where Reagan left off, wanting women workers at home, unorganized and without a voice or safety regulations, so that subcontractors — who feed garments to the big manufacturers — can freely exploit them.

But Shui-Mak Ka, head of the Chinese Committee of New York Coalition of Labor Union Women (CLUW), declared at the New York City hearings, “Legalizing homework will force women to be stuck in the home. What’s the meaning, then, of women’s equality? The government should set up more quality child care centers, so that working women can truly feel free to get out of the house and demand equal treatment in the workplace.”

Mary Ann Heimann is a cultural worker and treasurer of the union of Legal Service Workers of Los Angeles.