“Faithful Witnesses” is an exhibition of Palestinian children’s art collected from camps, villages, and cities on the Israeli-occupied West Bank and Gaza Strip. The project was conceived by Kamal Boullata, Suleiman Mansour and Tayseer Barakat, three prominent Palestinian artists, and sponsored by Roots, an American-Palestinian youth organization, and the League of Palestinian Artists.

Boullata, a Jerusalem-born artist and writer who has lived in exile since 1968 in the U.S., has written a book about the children’s artwork called Faithful Witnesses: Palestinian Children Recreate Their World. Following are Kamal Boudata’s comments, excerpted from a Unity interview by Peter Saltzman and from Boullata’s introduction to Faithful Witnesses. 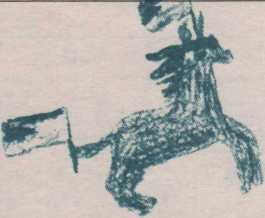 In the summer of 1986, I was in the Occupied Territories, and a child came up to me who knew I was interested in his art. He was nine years old. He gave me two pictures — he said one is for you, and the other you give to an American friend who would like to learn about Palestine. I was very moved by that.

Then in 1987, the Uprising began. I don’t know if one can really explain the influence of an uprising of that magnitude — an uprising of children against an entire army that has gone on day in, day out, for close to two years now. I thought I would like to hear directly from them rather than give others my interpretation of who they are.

During the early days of the Palestinian Uprising, the Israeli authorities ordered all West Bank and Gaza schools closed.

To the children brought up with the lore and legends of the land, it was not the first chance to hear of men in power pointing the finger of accusation at a fearless child determined to lead his people out of oppression.

With schools closed and curfews frequently imposed, I wondered, suppose the children were given the chance to freely express themselves on paper, what would they paint? If the small hand that dares to lift a stone against a beleaguered soldier armed with live ammunition is given a crayon, a brush, or a pencil, how will it attack the paper to recreate the world being shaped by the youngest generation of Palestinians?

The first group (of children’s paintings — ed.) contemplates the legacy of traditional pastoral life…; the second group reflects the experience of everyday life under occupation, documenting the dignity of a people’s endurance and their unyielding resistance to oppression; the third group consists of pictures which assert faith and the continuity of the collective dream, with a vision of the peace these children have never seen.