OTA CAMP, HAWAII — The struggle to defend the resi­dents of Ota Camp/Makibaka Village has become a rallying point for the Filipino (Pilipino) people — Ha­waii’s fastest growing na­tionality. It is a proud chapter in the struggle of Hawaii’s local people for housing, land and politi­cal power.

Filipinos were first brought to Hawaii as workers for the vast sugar and pineapple plantations. They suf­fered brutal oppression and dis­crimination. Following World War II, some Filipinos left the plantations, but were forced through evictions to move from place to place. Some eventually settled in a swampy section of Waipahu on the island of Oahu, called Ota Camp.

The Ota Camp struggle began in the early 1970’s when devel­opers once again tried to evict the Filipino families. This time, the people decided to fight back.

They defied the evictions and fortified this Filipino commu­nity against forced dispersal. Residents built a community center with a health clinic, office and meeting rooms, and a tutor­ial program for the children. Resident Pete Tagalog explained to UNITY, “People saw the im­portance of preserving our Fili­pino lifestyle and community.”

After a militant three-year struggle, Ota Camp residents moved to the present location on city-owned land in 1975. When their houses were built, the residents and the Hawaii Hous­ing Authority (HHA) made an agreement that the people could assume the developer’s con­struction loan after ten years, as a way of buying their 31 low-cost homes.

Now that the ten years are up, the landlord-developer is once again trying to evict the residents of Ota Camp / Makibaka Village so he can build expensive homes on the site.

The outraged community de­manded that the promise be kept to allow them to take over the developer’s loan on their homes. They marched 150 strong on the HHA April 17, winning a partial victory by forcing the HHA to reopen negotiations on Ota Camp. July 19 is the new dead­line to resolve the terms of the loan with the HHA.

For the first time, the Oahu Filipino Community Council, an umbrella organization, came out in strong support of Ota Camp. Even greater mass support from the wider Filipino community and all progressive peoples of Hawai‘i will be needed to win. 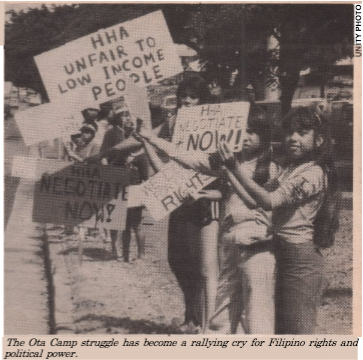 Ota Camp/Makibaka Vil­lage is part of the struggle of Hawaii’s local people for af­fordable housing. But more than that, it is a struggle against forced dispersal of the Filipino community, and for Filipino rights.

Filipinos make up 14% of the state population. But Filipino students make up only 5.2% of the student body at the Univer­sity of Hawaii’s main campus at Manoa, and most Filipino workers are concentrated in the most oppressed service, hotel and plantation jobs.

Filipino communities like Ota Camp serve as a basis of building the struggle for politi­cal power and against discrimi­nation and inequality. As the theme of Ota Camp declares,