“We saw the power of people united in the struggle.“People gotta learn to rely on the people, and learn not to be afraid,” said Pete Tagalog, leader of the Ota Camp residents, to Unity. He was talking about the long road that brought them from fighting evictions in a swampy wasteland 15 years ago, to being able to own and manage their land and community today.

An agreement was signed with the city September 29, clearing the way for the residents to keep their rents low (under $300 for three- to-five bedroom houses), and their culture and lifestyle intact. In 14 years, they will be able to buy their land from the city with a guarantee that the price won’t go up. This is significant, since Hawai‘i has nearly the highest housing costs in the U.S. and the land is monopo­lized by corporations and the military (which controls 25% of land on Oahu).

Ota Camp is a victory for the mainly Filipino residents. Filipino immi­grants first came here in 1906 to labor in the sugar and pineapple plantations. Many were later moved to oppressed communities like Ota Camp where people paid the landlord rent and built their own shacks.

It is also a victory for native Hawaiians and other local people strug­gling to preserve their culture and way of life, living close to the land that once belonged to them. Since the 1820s when the U.S. missionaries and settlers began colo­nizing these islands, the people of Hawaii have fought for their land and self-determination.

Ota Camp inspires other struggles like that of res­idents of Holae‘ae Point in nearby Eba, who are fighting the first phase of a big development plan that would make rural Eba into the “second city” of Oahu. This would displace the Hawaiian families who have lived there for over 40 years and destroy their way of life. 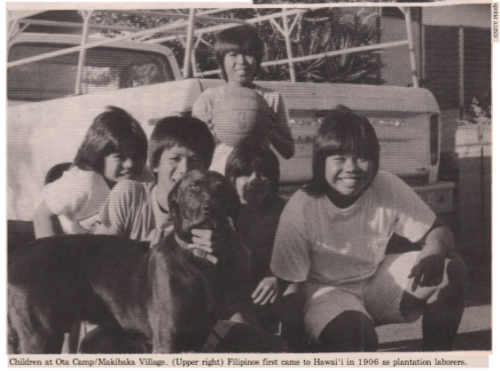 When faced with eviction in 1972, Pete Tagalog says, “We were scared at first. But we were pushed down on the plantation and evicted so many times be­fore. We finally stood firm and said ‘Filipinos won’t be pushed around any more!”’

After three years of struggle and widespread support from local people of all nationalities, the Ota Camp residents won the right to relocate their whole community, keeping the rents low and their life­style intact. They named their community Makibaka (Struggle) Village.

Developer Jack Ujimori was brought in to build the homes and act as the land­lord until 1984, when the residents were to take over. But in 1984, he sued the residents for refusing to pay an illegal rent increase imposed in 1981.

In the ensuing struggle, residents had to fight the state and city governments and Ujimori, all trying to take away the homes the people had won. They built mass support among other oppressed communities, students and unions, and filed a lawsuit against Uji­mori and the city.

Finally, after three years of demonstrations and negotiations, an agreement. Makibaka Village is now a permanent home and a center to expand the strug­gle for housing and politi­cal power in Hawai‘i.

Nora Gozon, resident leader, told Unity, “People still need housing they can afford, and people are still struggling — in housing, education, jobs — so they can control their commu­nities. We always say:‘ Makibaka, Walang Ma-takotl Struggle, We Are Not Afraid!’ This message and lesson has to go out to other communities.”

Joan Takano is an active supporter of the Ota Camp struggle.