By a narrow 5-4 vote, the U.S. Supreme Court upheld, on July 3, a Missouri law which restricts women’s right to abortion.

While not overturning the historic 1973 Roe v. Wade decision that legalized abortion, the court opened the way for each state to pass its own limits on women’s right to reproductive choice. The Missouri law, for example, bans abortions at hospitals (public or private) built on public land or that receive any government funds. It bans public employees (including doctors and nurses) from performing or assisting in abortions. It also requires expensive “viability” tests on any fetus thought to be 20 weeks old. 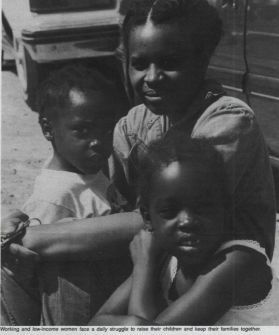 By upholding such a law, the Supreme Court showed callous disregard for those women whose lives it most affects. Wealthy women will still be able to obtain abortions, but poor women will be forced to return to the days of back-alley abortionists and self-abortion. And it is poor and working women for whom the choice of having children is most acute. For her, it is not only a question of timing, but of, “Will I be able to care for this child? To provide food, shelter, clothing and education?”

“It seems as if none of the people who are so against abortion are out there fighting for more money for children, better child care,” Victoria, an African American woman from San Francisco, told Unity. “They’re not out there trying to get people off crack, and people are having crack babies every day.”

Gloria Wolford, a 64-year-old secretary from Atlanta, agreed. She told Unity, “When every one of those Operation Rescue people has adopted one of these AIDS babies .. . or even just some of these little things that are unloved and unwanted — then come and talk to me about Operation Rescue.”

At stake is women’s fundamental right to reproductive choice

In contrast, for 16 years, Roe v. Wade has set a national, constitutionally protected standard regarding women’s fundamental right to decide when and whether to have children. This decision was based on the case of Norma McCorvey, known as “Jane Roe.” At the time she became pregnant, she sought an abortion because she was unable to support a baby. But abortion was illegal in her home state of Texas, and she could not afford to travel to a state in which it was legal. So she was forced to have her baby and give it up for adoption. By taking her case to the Supreme Court, Norma McCorvey fought to guarantee that poor women would no longer have to suffer as she did.

Since that time, as Supreme Court Justice Harry Blackmun stated in his dissenting opinion in the Missouri case, “millions of women and their families have ordered their lives around the right to reproductive choice … ”

But now, the Missouri case sets a precedent for every state to pass restrictive laws, even in direct contradiction to Roe v. Wade. And, ominously, the high court will hear three more abortion rights cases in the fall.

Before the ink was dry on the July 3 Supreme Court decision, the right-wing extremists of Operation Rescue were already preparing to introduce measures in key states for restricting abortion rights. Eventually, they hope to pass such bills in all 50 states, and to force the overturning of Roe v. Wade as early as next fall.

With the blessing of Presidents Reagan and Bush, and now the Supreme Court, Operation Rescue and the misnamed “right-to-life” forces have made anti-abortion stands a litmus test for judges and elected officials. As few as nine state legislatures and the District of Columbia still favor keeping abortion legal, even though two-thirds of the American people are pro-choice and favor keeping Roe v. Wade as is.

Given this situation, women’s rights organizations and other concerned people are preparing for a political battle, state-by-state. They are putting state legislators on notice that state law must reflect what the majority of people want, or the voters will replace them.

This battle also underscores the vital importance of continuing to fight for health care, prenatal care, birth control, quality schools, jobs at a living wage, and the restoration of basic civil rights for all. Because not only abortion rights are at stake, but the rights of women, children and families to a decent life with a future.