SAN FRANCISCO — Two Kaiser doctors rushed out to the picket line here November 10 trying to find an X-ray technician who could help save a patient’s life.

With permission from her union representative, Marty Fong crossed her own picket line, performed the complicated test, which doctors were unable to do, then returned to picket.

Fong is one of 10,000 Kaiser workers in northern California who walked off the job on October 27, joining 850 more in Hawaii who have been out since October 13. Kaiser forced the strike with demands for a three-year wage freeze and a two-tier wage plan that could cut new hires’ pay by up to 30%. 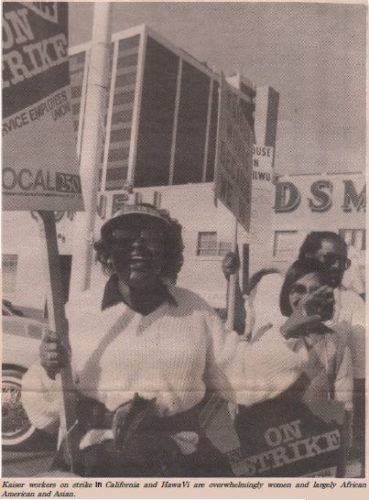 As this picket line incident suggests, the workers are fighting for patients as well as themselves. A two-tier wage system would hurt the quality of patient care at Kaiser by undermining employee morale and causing greater staff turnovers. Other hospitals are sure to follow suit if Kaiser wins major concessions. On the other hand, a strike victory could draw a line against further concessions and improve the quality of patient care for the the mainly working class people who rely on health maintenance organizations (HMOs) like Kaiser.

In a time of government cutbacks, the low-cost care provided by HMOs is promoted as the answer to soaring medical and insurance costs. Kaiser’s longtime monopoly has made it the world’s largest non-governmental health care provider. But now with the growing demand for HMOs, a flood of competitors is challenging Kaiser.

Instead of attracting customers with quality care, Kaiser is trying to beat the competition by cutting corners, slashing labor costs and using the money it saves to expand into new markets. Over the next three years it plans to invest some $2.7 billion in nationwide expansion.

On one side of the strike are nearly 10,000 licensed vocational nurses, housekeepers, nurses’ assistants, clerks and technicians, represented by the Service Employees International Union (SEIU) Local 250 and two smaller unions representing opticians and lab technicians.

Kaiser’s workers are mostly women and largely African American and Asian. Initially, up to 80% of  registered nurses at some hospitals struck in solidarity. Their contract expires next year and they recognized management would demand similar concessions. But because their contract has a no-strike clause, many nurses were forced back to work by a court injunction.

On the other side of the strike stands Kaiser Permanente, with revenues of over $4 billion in 1985, and five million enrollees in 15 states. Kaiser management has flown in scab supervisors from southern California and the East Coast. They have also obtained a court injunction limiting picketing and are running a major ad campaign touting their “high quality” health care.

Legally a “non-profit” institution, Kaiser earned nearly $200 million last year — a 20% return on its investments. Yet it tells its patients it “can’t afford” to give them decent care at existing rates without a two-tier wage.

Both workers and Kaiser management expect a long strike. Recognizing the corporate power behind Kaiser, SEIU Local 250 mounted a sophisticated organizing and publicity campaign to win the strike.

For months before the contract expired, over 500 rank and file workers participated in “Kaiser Organizing Teams” (K.O. Teams). Picket captain Deborah Harrison says, “There’s no comparison with last time,” referring to the 1973 strike. “The rank and file are much better organized.” Union radio spots and full- page newspaper ads refute Kaiser’s claims that wage concessions are needed to stay competitive. The ads also call on Kaiser members to cross picket lines and demand the medical services they have paid for, to put more pressure on Kaiser.

The union vows to increase public pressure by stepping up outreach to community groups, politicians and the press. On November 13, over 3,000 strikers rallied at Kaiser headquarters in Oakland. More actions are planned, and over 150 unions pledge to encourage their members to withdraw from Kaiser if the strike is not settled soon.

The union is showing that the interests of the public and Kaiser workers are fundamentally the same: affordable health care cannot be bought at the expense of workers’ livelihood or quality of care.

Denise Imura is a member of SEIU Local 250.