How to Skin a Catfish Company; Winds of change are blowing in Mississippi

Behind the union win by Black women in Mississippi

The dramatic victory of a nine-month organizing drive at Delta Pride in Indianola in October by the United Food and Commercial Workers (UFCW) highlights a spreading movement for union recognition among Black workers in the state’s booming catfish processing industry.

No state in the U.S. has been more hostile to unions, especially for Black people.

But African Americans in Mississippi increasingly see the right to union representation as a key element in the fight for democracy and political power. 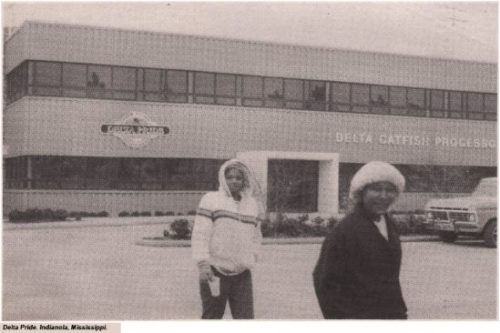 Union drives are springing up all over now. It’s because of the times, the economy

This month, one year after the union drive began. Unity spoke with four people who played a critical role — two workers and two supporters — to learn how this victory was won.

Who works in the plant? Where do they come from?

Young: There are 950 people in the plant. They come from Greenwood, Indianola — all over. Out of 30 supervisors only three are Black. White: 98% of the workers are women, mostly Black women.

How did you get in touch with the union?

Young: They sent out these flyers and we mailed one in. Then the UFCW sent in an organizer. They’re organizing all over Mississippi.

What kind of support did you get from the community?

Young: We got a lot of support — Rev. Freeman, Rev. Shields, the Black Women’s Association, the teachers’ association. We would have meetings once or twice a week.

White: They came out during lunch hour and talked with us. They came to our rallies.

Were you harassed by the company?

White: My supervisor harassed me. We work on the kill floor where you take the mud out of the fish and skin it. He said he would put me on the gut floor. “I’m going to drop you down to long gone pay. ” Then he would speed things up. The union organizer told me they were trying to fire me.

Young: This is the only place to work around here, so it’s scary.

White: After a while, we learned that they were just as scared. So we just worked harder for it.

Young: If you want anything bad enough, you can do it.

I think more catfish plants will be unionized. The treatment is the same. There was a plant in Tunica, Pride of the Pond, which won in September. At ConAgra they lost, and now they are working seven days a week. They tell us they are sorry they did not vote for the union. At Grain-Fed in Sunflower, they have an organizing drive, and over at Lewis Groceries, where they have 1,000 workers.

How did you become involved with the union drive?

They came by and asked me to participate, and I said that I would do my best. They asked to use my church for a meeting. I was the guest speaker for the union that night.

The town was split. Some didn’t want the union; others were afraid.

A lot of them didn’t understand what a union was all about. I think we did a very good job in getting votes that we weren’t supposed to get.

Why did you support the union?

Many of the ladies that work out there are in my congregation. I was told by the workers that there were bathrooms without doors, no privacy. Ladies would be wearing boots and standing in cold water all day. They’re handling fish in ice with just a pair of rubber gloves on. And whites could go up to the offices where they had doors on the bathrooms

How did the NAACP get involved in the organizing drive at Delta Pride?

Workers employed in the various catfish plants began contacting us. There were continued complaints about the lack of due process. The lowest supervisor could tell you to punch out, and there was no recourse — you were just fired. People were always having accidents. People would complain about having to work too fast and too hard and too long.

The people who work in the plant live all around me. Some are even distant relatives. The industry touches just about everybody.

We got so many complaints that we had to start looking at it. We started contacting our local branches. The union asked us to become more visibly involved. We had news conferences; we started participating in the rallies.

Who were the main supporters in the local Black community?

Several of the ministers came in strong and opened up their churches to the people. The local leadership was necessarily involved. Very little can be done without at least some of them.

Organized labor has always been a threat to the farming community, (which) has traditionally conducted a propaganda campaign against it. There are certain Uncle Tom-ish types that the white community contracted to try to persuade the Black community that the union was bad for them. But in the end we got the support of most of the local leadership of the Black community.

Are there other unions organizing in the area?

They’re springing up all over now. It’s because of the times, the economy. People are having to deal with day-to-day economic survival much more seriously than they had to in the past. Sunflower County has one of the highest unemployment rates in the Delta.

Has the rise of the catfish industry helped the local economy?

It’s not as great as a lot of people would have it seem. For the local banks and planters and a few others, yes. But I question whether there is a benefit to the whole community. The workers indicate that even after two or three years in the plant they could not see any improvement in their lives. (The industry) is bringing money into the state, but there’s more going out than coming in.

We will work with any and all unions doing organizing. They need a commitment from their national offices to put more resources into the area. There is stiff opposition from local governments, local chambers of commerce, the economic community.

How will these union drives affect y the political climate in the state?

Any time you’ve got people organized it’s easier to deal with politicians. Especially at the county 1 supervisor level, because they will see an organized union within their district that was not there before. I think they’re going to have to be more responsive to the needs of Black people, to organized labor and plain working people.

We are engaged in redistricting efforts all over the state, extending the one-man, one-vote principle to guarantee Black participation at all levels of government. We have made gains. But we’re still short in the economic arena. It’s just as important — even more so because of the times, because of Reaganomics. Now that we’re able to go into a restaurant, we’ve got to be able to pay for the food.