Newark, n.j. — The illegal racist-inspired invasion of Newark streets by Irvington killer cops which ended in the murder of 17-year-old Michael Harris of Newark must be forcefully opposed and the killer brought to justice! 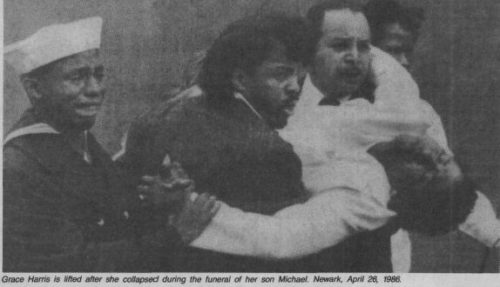 In response Newark Police Director Knox made a strong statement regarding the historically demonstrated white supremacy mentality of the Irvington police (12 black cops out of 340! in a city whose population is at least 50% black!). We know Mayor Gibson is “interested” in the case only to get his sorry self reelected! Knox’s statement that if the Irvington police came back into Newark they would get arrested is as strong a statement made publicly by political figures about the situation.

But we must go further and lay it out plain. The cop is a murderer. Before several witnesses, he shot young Harris in the back in cold blood! And first of all, he was in Newark illegally, he had no jurisdiction. He was not in “fresh pursuit!”

Killer Cop Paterno says young Harris made some obscure move with his arm — that none of the witnesses saw! Only the wimp murderer rookie Paterno, so diseased with racism and white supremacy, believing himself to be one of the “master race” yet, when faced with reality (confronting black and Puerto Rican youth), turned into a jittery psychopath whose only claim to “manhood” is to put a bullet in their backs!

The Essex County prosecutor, notorious anti-black hatchetman George Schneider, said immediately, it could only be an accident or selfdefense! Since it was a white cop and a black victim, as usual! It reminds you of Michael Stewart in New York or Luis Baez, shot 21 times by killer cops in Brooklyn. The list is endless and continuous. But when they get bored momentarily with killing working people and oppressed nationalities in the U.S., they’ll invade tiny black Grenada or threaten liny Latino Nicaragua or bomb tiny north African Libya! Sound familiar? From Reagan on down to Killer Cop Paterno they are white supremacy freaks down to the bone!

Yet Paterno has not even been suspended! KILLER COP PATERNO MUST BE IMMEDIATELY SUSPENDED. HIS GUN TAKEN AWAY. OR ELSE ARRESTED BY NEWARK POLICE AND BOOKED ON SUSPICION OF MURDER ONE’.U

The issue is Self-Determination, part of the overall struggle by the African American People for democracy! Now in some cities the large black and Latino populations have some aspect of political representation (e.g., Black and Chicano mayors, Puerto Rican elected and appointed officials), they have more power than has existed in historically repressive and racist USA. For the largely black cities, this means the modern slave masters must reassert, reimpose political powerlessness over us by stripping us of self-determination! That’s why racist State Superintendant of Schools Cooperman is getting ready to try to take over Newark’s school system since we got an elected school board. That’s why there is some numskull talk about state police taking over the Newark Police Department. Even in New York state they are now talking about taking over the New York City school system. Why? Control of the huge city budgets, which are still mostly controlled by corporations and personnel living outside the central cities. That’s why the cities are so poor, city contracts and budgets that could employ inner city residents and be the catalyst for new and minority business developments are still pumping millions of dollars into the suburbs. Also they fear Black Self Determination, because they know we would not elect Reagan, invade Grenada, Threaten Nicaragua or bomb Libya! Like Muhammad Ali said in his clearer days, “No Vietnamese ever called me nigger!”

What about a black city where the most militant statement about its most recent of white supremacy killer cop murders of black youth, is made by the police chief? The idea of black self-determination and democracy has always frightened the rulers of this country because the U.S. has never been a democracy! It was built on black slavery, black people continue to be slaves. That’s why racist Reagan bombs Libya but supports fascism against Black South Africans!

PATERNO MUST BE SUSPENDED IMMEDIATELY OR ARRESTED BY NEWARK POLICE AND BOOKED ON SUSPICION OF MURDER ONE!