Atlanta — when people talk about the “New South,” they often mention Atlanta — one of the region’s biggest and most modem cities.

Yet much of this image masks the racism and new forms of “plantation labor” which were hallmarks of the Old South.

Nobody knows this better than the 1,300 Black workers, most of whom are women, who clean the fancy shopping malls, corporate headquarters and high- rise office towers of downtown Atlanta.

Most work a four-hour evening shift as janitors, after already putting in a full day’s work at low-paying jobs in hotels and restaurants, hospitals and retirement homes, or as cooks and housekeepers in private homes. Working for non-union janitorial contractors, they get no health benefits, sick leave, pensions or job security, and earn an average of just $3.50 an hour. 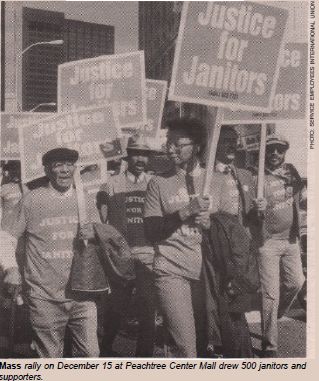 So Atlanta has become a center of the nationwide Justice for Janitors campaign, organized by the Service Employees International Union (SEIU). SEIU regional coordinator Robert Sarason points out that building services work is the fastest growing occupation in the country, yet it features some of the worst pay and working conditions.

The union’s strategy is to organize the janitors at all 56 buildings in downtown Atlanta, rallying around the call for dignity and a decent wage.

The Justice for Janitors campaign unites the labor and civil rights movements, with active support coming from Rev. Joseph Lowery of the Southern Christian Leadership Conference, Congressman John Lewis, and antiracist groups like the Center for Democratic Renewal.

This alliance is key, since unions have never been strong in this open-shop city.

Atlanta’s rapidly growing service industries employ many Black workers and are almost totally non-union. Claude “Thunderbolt” Patterson, a former wrestler who is now a union organizer for the Justice for Janitors campaign, told he sees this struggle carrying on where Martin Luther King left off. Patterson says, “Since Martin went to Memphis (in support of striking Black sanitation workers — ed.), I don’t think too many people cared about the people who do this kind of work. ” He adds, “They’re strong women who have been denied and misused for a long time. They’ve kept those buildings shining. They’ve put a lot of children through school. They deserve respect and dignity.”

Black women are the backbone African American women janitors like Eula Mae Malone are the backbone of Justice for Janitors. Ms. Malone, one of the first rank and file organizers for the campaign has worked 16 years as a janitor at the United Way building. Working for one of the few unionized janitorial contractors (who cover just four of the 56 downtown buildings) has given her a measure of job security.

“In most buildings,” she says, “they’ll fire you for nothing. If you stay out one night, supervisors will demand a doctor’s note and fire you if you don’t have one.” She adds, “It’s unfair, but if you don’t have anyone to fight for you, you can’t do anything about it.”

That’s why, for the last eight months, Ms. Malone has not gone straight to work from her daytime job as a housekeeper in nearby Sandy Springs. Instead, she stops downtown at one of the nonunion buildings and talks to the workers as they arrive. “We meet them outside and get them to sign cards,” Ms. Malone told Unity. “We tell them how the union will help them get raises and justice on the job.” This is how the union plans to organize all 56 downtown buildings, which would be a tremendous victory for the workers over the “plantation labor” system perpetuated by the janitorial contractors and building owners.

At first, the janitorial contractors, ranging from small operations to giant corporations like Oxford and Hawley, tried to ignore the campaign. But after a mass rally of 500 janitors and supporters at the Peachtree Center Mall on December 15, many contractors tried to head off more union gains by raising the average pay to $3.70 an hour.

At the same time, the building owners are resorting to repression to keep the union out. Multimillionaire developer John Portman, owner of the Peachtree Center Mall, has won a court injunction limiting pickets to six at a site, and is seeking an injunction charging the union with contempt of court. But Eula Mae Malone expresses the workers’ determination and confidence. She told Unity, “If we push a little harder, holler a little bit louder, we’ll be heard. And it will help us get a union!”