Jesse Jackson and the Significance of Super Tuesday

Jesse Jackson’s victories in the Super Tuesday primaries pageant are a “symbolic” reference to the existence of the African American nation in the Black-belt South. The five states won approximate the core and outer limits of that nation, so that even in the dregs of U.S. bourgeois democracy, an election yields a referendum-like expression of a national consciousness. Especially because that consciousness (selection) was registered numerically, and as an expression of preference inimical and opposite the majority of Americans. 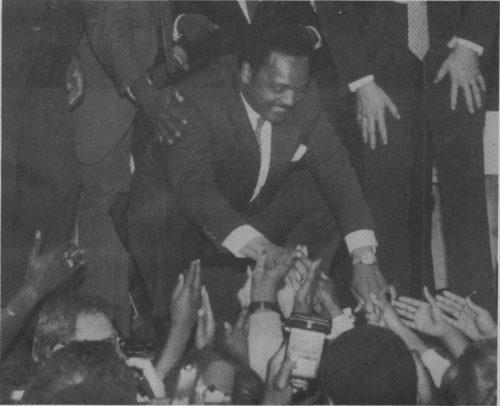 Jesse Jackson’s campaign has been masterfully moved and inspirational, especially in its mass expression of Black and progressive political desire. The African American nation spoke Super Tuesday and raised Jackson by the numbers into an undeniable importance to the presidential election. This is so powerful because it confirms that Black people are critical to this society’s functioning on any level. There is in the Jackson campaign a powerful catalyst for the reigniting and the reawakening of a whole people and a whole movement. A civil rights movement has moved full speed into the Jesse Jackson campaign. The Jackson campaign is this present period’s civil rights movement.

The objective Rainbow is an exact physical parallel to The United Front and mass organizations and indeed even the communist party we seek, with the latter its working class leadership that must develop, for it is authentically brought into existence.

The Black Nation is the slave history and present of U.S. society and white supremacy capitalism. Super Tuesday is actually a Black-belt referendum! The political focus of the Black South joined with the Black oppressed nationality in the North who are linked by blood, experience, history and culture, define the major U.S. cities’ obvious ideological and political link with the South. The fact that the whole of the African American nation is seen as a lower class speaks to the class nature of the national question. Only the destruction of imperialism can finally resolve it.

The 26 major cities where African Americans are large pluralities or majorities, connected and expanded by a rationalized African American national “state zone” in the South (i.e., the most continuous areas of Black plurality and majority), are a powerful political force in the U.S. Black people are 11% of the U.S. population. Jesse Jackson has consistently gotten 10% of the white vote. This 20% challenges the 24% of the population who voted for Reagan.

Progressive forces must support the Jesse Jackson campaign and build the objective Rainbow as a permanent vehicle for progressive community and electoral development. It is silly to talk about revolution and not even be able to elect a school board member!

Revolutionaries would be building mass and cadre structures on the energy and real advance the Jackson campaign can generate! Theoretically it is less complicated to transfer power in a district or ward or city or county or state than the entire U.S. national state. Would that revolutionaries better understand the practical and theoretical advance rainbow structures hooked to the campaign, which could function to elect local candidates even post-presidential election, would be. The progressive aspect of bourgeois democracy must be used to transcend it.

The growing dynamic of Black national consciousness is the call, the spark. It is the measure of the torture of labor in general. The intensified and outrageous “new” super-exploitation the weakening U.S. rulers must utilize to try to keep their coffers full. American workers are being tortured; fired, made to give up historic advances made in revolutionary periods.

The Black worker is the most extreme case, since national oppression, maintained racially, doubles the exploitation, the robbery and denial of rights.

The other oppressed nationalities, Native Americans, Latinos, Asians, experience the same kinds of attack, but class exploitation is fine tuned to maximize oppression by race so that the darker the skin, the more oppressed one is likely to be even in the same group. It is the fall of Africa that is being reinforced for ages now by white supremacy, the social philosophy of Western capitalism.

The African American national question and its underlying focus on Black Self Determination cannot be dismissed or hidden for long. Super Tuesday and the Jackson campaign redefined that question and the Black Liberation Movement for the 1990s.