A new federal court ruling is forcing thousands of California women to make an agonizing decision between children or a job. On March 19, U.S. District Court Judge Manuel Real voided a 1978 California law that guaranteed women their right to return to their previous or a similar job with the same employer as soon as they get back from maternity leave. The 1978 state law had actually strengthened the Civil Rights Act by unconditionally guaranteeing new mothers job security. 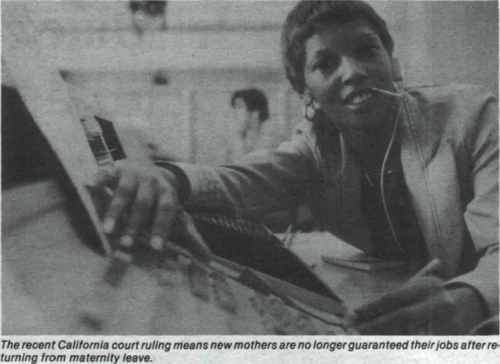 The federal court’s decision arose after Lillian Garland, a receptionist, was denied her old job following her maternity leave, and was forced to wait for a new job vacancy. The State Fair Employment and Housing Department filed a formal complaint in 1983, but her employer challenged the state law in federal court.

State agencies, officials, labor and women’s rights groups immediately protested the ruling. State assemblywoman Maxine Waters, co-author of the 1978 law, angrily pointed out in a March 22 press conference, “While women may now choose whether to become mothers, mothers have no choice as to whether to work. Today’s economy requires almost every mother to work to support her family.”

When California finally passed the 1978 law, it was a victory for working women. Now, if the federal ruling is not overturned, it will mean a serious setback.

Women have had to fight for years against the idea that pregnancy and childbirth are only “women’s problems,” and not “legitimate” medical conditions. As Christine Curtis, a lawyer who worked on the 1978 law, told UNITY, “Only women can become pregnant, and only women, therefore, would be open to losing their jobs.”

The state law began to correct this historical inequity for women. Yet Judge Real used a typical “reverse discrimination” argument to turn the issue on its head. He ruled that the California law violated the Civil Rights Act by giving women on maternity leave “preferential treatment” over men.

Judge Real is following in the footsteps of Reagan’s newly appointed director of the Civil Rights Commission, Linda Chavez, who wants to investigate the “legality” of comparable pay for women. The federal ruling also sets a precedent against women in other states seeking similar job protection.

With unemployment on the rise, the capitalists are trying to force more working women back into the home, and into traditional childrearing roles. The voiding of California’s maternity leave law fits the trend under Reagan of attacking women’s rights in all spheres to serve the needs of big business.