A victorious struggle for dignity and quality education

LOS ANGELES — On May 25, the cav­ernous L.A. Sports Arena shook to the strains of “Solidarity Forever,” as thousands of teachers brought a victori­ous end to a ten-day strike that crippled the nation’s second-largest school district.

By voice vote, members of the United Teachers of Los An­geles (UTLA) resoundingly rat­ified a new three-year contract, after almost 15 months of ne­gotiations and struggle with an arrogant, racist school district administration that controls a $3.5 billion school’s budget. 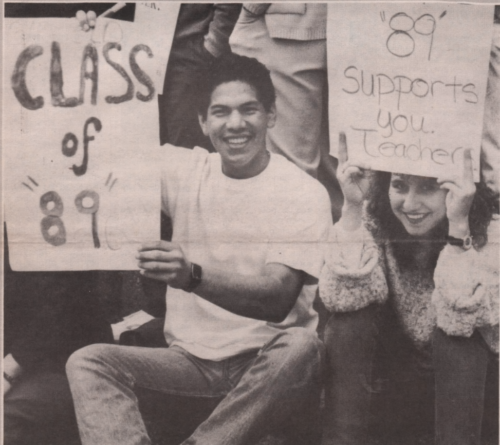 Dignity for those who teach, and a school environment made for learning — these were the issues at the heart of this strike by 23,000 teachers. As Jaime Escalante, the math teacher from East L.A.’s Garfield High (of Stand and Deliver movie fame), told Unity before the vote, “We are the ones who help produce quality education. The district needs to realize that if we fail our children, we fail the future of our country. We find it necessary to fight all the way, to demonstrate our dignity, to hang on till we win!”

And win they did. The UTLA won agreement to a form of school-based management and shared decision-making that will give teachers a greater voice in school site policies and will help empower parents; princi­pals will no longer have veto power over most major deci­sions. Teachers also won a 24% salary increase over three years.

The UTLA strike has spot­lighted teaching as a degraded profession. The average new teacher suffers burnout after just four to seven years on the job. Once a popular career choice, especially for women, it is now a bottom choice of college students.

Los Angeles’ schools are severely overcrowded, with the worst teacher-student ratio in the U.S., and teachers pay up to $2,000 a year out of their own pockets to buy basic class­room materials. Some 2,000 teachers a year leave the district, stretching the overbur­dened teacher work force to the breaking point.

At stake was the education of a generation of L.A. chil­dren, who are 60% Chicano/ Latino and 29% African American and Asian. Mary Rose Ortega, a teacher for 13 years, told Unity that for many Latino immigrant children in her class, their only daily meal is the free school lunch. “How can they learn when they’re hungry?” she asked. “How can they feel good about them­selves when their language and culture are constantly put down?”

School District Superinten­dent Leonard Britton and hard-line school board mem­bers forced the strike, hoping that teachers would be divided, and that parents and students would blame the union for the schools shutdown. Even after the state budget surplus showed enough money to meet the teachers’ pay demands, the dis­trict refused to settle. But they underestimated what teachers, students and parents would do.

Many parents, too, gave sup­port. Josie Sosa of Parents and Students in Action, a Chicano parents’ organization, told a May 19 rally of 12,000, “We support your demands. We know how you feel. We are treated without respect every day of our lives. We won’t take it anymore!”

Parents, teachers and stu­dents now need to build on their alliance, if shared decision-making is to become a reality. The Latino commu­nity and UTLA can also fur­ther the dialogue begun dur­ing this strike, in which the Mothers of East Los Angeles were one of the teachers’ most ardent supporters.

As Antonio Villaraigosa, UTLA area representative, told Unity, “Certainly within this struggle lay the seeds for this kind of alliance to grow. … Now, for the first time, par­ents have a right in decision­-making. This was a victory for parents as well as teachers.