STOCKTON, CA — It is clear at a glance how most of this town’s 170,000 people earn their living. Fields and orchards surround the city, dotted with pesticide and fertilizer plants and huge food processing plants. Stores and restaurants bearing Spanish names line the streets. In the summer, the colorful plastic hard hats of the cannery workers are everywhere you look.

This sleepy-looking city, 50 miles south of Sacramento, has become a battleground with crucial importance to California’s 100,000 food processing workers. The struggle hit a peak last December as the 10,000-member Teamster Cannery Local 601 elected its officers. For the first time “in the local’s 40-year history, the entrenched leadership clique had to fight off a serious challenge from a rank and file slate, which mobilized strong support from the local’s Chicano-Mexicano majority. 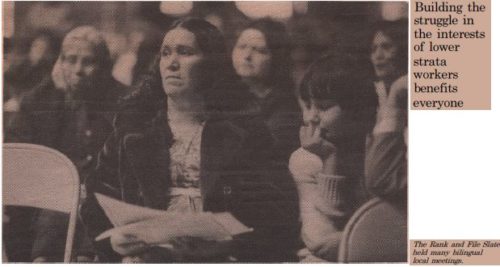 Everyone could see that this election was different. Three years ago less than 1,000 people voted. This time over four times that many turned out. Hundreds of cannery workers attended bilingual community meetings sponsored by the Rank and File Slate, most of them Mexicano women who work seasonally and have long been treated like an invisible majority in union politics.

A number of candidates received death threats. One told me, “The last straw was when my mother-in-law, a community activist who had organized several house meetings, got a phone call saying she was in danger if the house meetings didn’t stop.”

The contradictions are very clear in the canneries. The foremen are all male and mostly white. They wear white hard hats to distinguish themselves from the workers, who wear colored ones. Seasonal workers, the lowest paid and hardest working, are overwhelmingly women and minorities (about 60% Latino and 10% Chinese). The local does all its business in English and holds elections in December, when all but a handful of year-round workers are on layoff.

The Rank and File Slate consciously tried to organize those who have been kept from participating in the union. Its platform focused on demands that are especially important to seasonal workers: equality of languages on the job and in the union; severance pay for seasonal workers; extending protection to seasonal workers against the plant shut-downs that are increasingly common in the industry; no more discrimination or favoritism.

The local leaders countered with a racist attack on José Soto, a Spanish speaking candidate. On a candidates’ night organized by the Rank and File Slate, Local 601 officials sent someone to pass out a list of questions for the challengers. The only question on the list for Jose Soto was “I don’t speak Spanish. Can you explain to me in English how you are going to represent me?”

The incumbents appealed to the conservative instincts of many white workers in Stockton, a town where the KKK and the Posse Comitatus have both been active. Their English-only mailing to the membership was full of red baiting and racism. “This kind of blatant racism really hurt them, not us,” says Soto. “It just made our people madder.” He adds, “They have called me a communist for the 20 years I have been active, and it never bothers me. In fact, it makes me proud because, in all of the capitalist countries, if you fight for the people they call you a communist. In Poland, the government would probably call me a capitalist for doing the same thing.”

The Rank and File Slate is appealing the vote, citing illegal tactics by the incumbents. But nobody is holding their breath waiting for Reagan’s Labor Department or the Teamsters International to overturn the election.

Instead, Stockton TDU [Teamsters for a Democratic Union] activists are consolidating new contacts and potential leaders who emerged during the campaign. Through the election, they met Latino activists in surrounding towns like Galt, Lodi and Thornton, where TDU had no presence before. They hope to build massive seasonal worker participation in next year’s struggle over the new Northern California cannery contract, covering 40,000 workers in ten locals.

They organized those who have been kept out of union affairs

“We would rather have won,” says one rank and file candidate. “But we think that it was a big step forward to have so many people who had never even been aware of the elections not only vote, but come out and organize house meetings and voting parties for us. I felt really good about the strength of the response from the Mexican community, and I think that this could affect our union for years to come.” A campaign volunteer adds, “We have shown them and ourselves that they just can’t take us for granted any more.”

The campaign holds real lessons for the cannery movement and the union reform movement generally. Stockton shows that building a struggle around the specific interests of the Latino workers and the bottom level of the work force benefited everyone by making the movement for a democratic, fighting union much stronger.