The setting is a small cannery in San Jose which makes jelly and peanut butter for sale to restaurants. A Mexicano worker has reported to work and his supervisor asks him if he has immigration papers. The worker says he doesn’t, and the supervisor tells him he can still work in the plant if he’ll pay the supervisor $500 to keep quiet.

Sounds like the script for a TV drama. But it is actually hap­pening every day in plants throughout the country that routinely exploit undocumented workers. In this case, one worker refused to pay off his boss. Now the INS (Immigration and Naturalization Ser­vice) has been called by the company, and all of the workers at the National Preserves can­nery have been told they must provide proper immigration papers by May 10 or lose their jobs. With the help of the Cannery Workers Committee, RAZA SI and a local Chicano lawyers group, the workers have forced their union, Teamsters Local 679, to fight the harassment. The union is to provide legal counsel for its members and is investigating legal action to stop the company from giving the INS employee records. 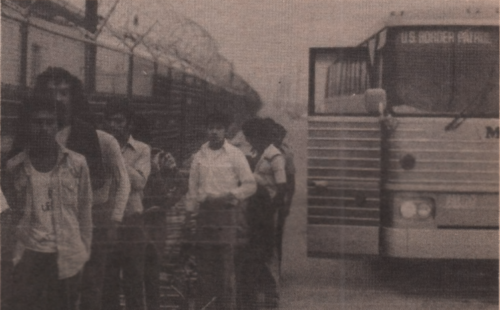 In San Jose, the INS opened a new office and there have been 13 raids within two weeks. The twice-weekly roundups follow a recent Supreme Court ruling permitting the INS to carry out factory raids. The INS claims that “at least 25%” of the Santa Clara Valley work force is undocu­mented, an assertion rejected by Chicano groups. The wave of INS raids has provoked immediate protest from the Chicano community in San Jose, forcing the City Council to adopt a resolution condemn­ing the raids and in­structing the police chief of San Jose not to permit cooperation between the police and INS in the raids.

Pickets have been organized by several community groups against the INS, and on April 26, RAZA SI and the Cannery Workers Committee held a public forum to address the legal rights of undocumented that drew over 500 Chicanos and Mexicanos. Among the speakers were attorney Teresa Bright of the Marc Van Der Hout law offices and Roberto Miranda of La Raza Legal Re­ferral Service. According to Fred Vargas of RAZA SI, “The Supreme Court ruling means in real life that la Migra (INS) will be able to go into factories and com­munities, drag people from their homes, separate children from parents and, in general, terrorize our communities. The decision and the raids must be fought — they are basic violations of our rights as a people.

The new wave of raids and the Supreme Court decision have been timed to build public opinion for the Reagan-backed Simpson Mazzoli immigration bill. The bill was to have been introduced for debate and vote on the House floor the week following the raids. But the raids have backfired, unleashing anger and protest from all sectors of the Chicano and Latino population. Speaker of the House Tip O’Neill — who had earlier promised to permit a vote on the bill — has now said that because of Latino outcry Simpson-Mazzoli will not be heard until at least after the primaries and possibly until after November. O’Neill and the Demo­crats fear that Chicanos will refuse to vote for Democratic candidates if the party allows Simpson-Mazzoli to pass.

At the heart of the raids and efforts to push through Simpson-Mazzoli are two concerns of the capitalists. On the one hand, they want to have a pool of easily exploited workers who cannot be unionized and who can be sent back to Mexico when they are no longer needed. Simpson-Mazzoli would provide this by establishing a guest worker program for temporary importation of Mexican laborers. It would also restrict undocumented immigration by imposing employer sanctions (criminal penalties) for those employers who hire undocumented. Through this measure, the capitalists hope to better regulate and control Mexican immigration.

But there is another concern — in a cer­tain sense a greater one. The capitalists are fearful of the ever­ growing Chicano pop­ulation of the South­west, which now num­bers over 12 million. That number is in­creasing daily both be­cause of higher birth rates for Chicanos than for whites and because of the steady stream of Mexicano immigrants who settle in the Southwest and become part of the oppressed Chicano Nation.The capi­talists are fearful of the growing power of the Chicano Movement and the potential for a broad movement demanding the right to self-determination, including the right to establish an independent Chicano state.< This is the reason that the Reagan Ad­ministration is pouring millions of dollars to beef up and militarize the Border Patrol, providing it with high-tech heat detectors and multi-million dollar helicopters to patrol the 2,000-mile border between the U.S. and Mexico. The capitalists are concerned that the Chicano Movement has actively fought for the rights of the undocumented and consistently raises the demand of uncon­ditional residency for all undocumented. They recognize the growing political power of Chicanos — as is evidenced by the Democrats’ decision not to allow Simpson-Mazzoli to come to the floor for a vote. The Chicano Movement has increasingly addressed itself to issues affecting Central and Latin America and is a staunch critic of Reagan’s policies in Nicaragua and El Salvador — policies designed to prop up dictatorships and undermine a popular people’s govern­ment solely for the interest of U.S. imperialism. Reagan and the capitalists cannot stop the flow of immigration from Latin America and the third world. As long as imperialism persists in oppressing other nations, immigrants will come to the U.S. in search of jobs and a better life — or to flee from right-wing dictatorships. The raids will only result in the growing strength and unity of the Chicano and working class movements. Reagan cannot stop the development of the Chicano Movement any more than he can put an end to the liberation move­ments in Latin America. The aspirations for independence and self-determination will continue to burn, and these flames are certain to engulf not only all of Latin America, but the Chicano Nation as well— flames that will eventually consume imperialism.