SAN JOSE, CALIF. — “Don’t ever let anyone tell you that the move­ment is dead, or a radical thing. It is us, all of us here today, along with all Raza who work for a better life and society,” said MEChA co-chairs Maria Rios and Anabel Ibanez, in a joint keynote at the first California Statewide MEChA conference of the 1990s. 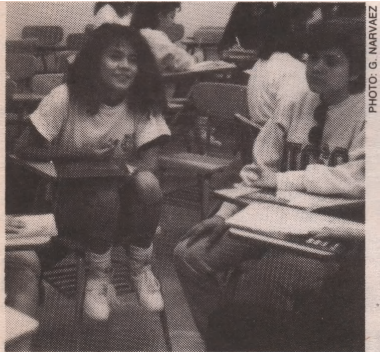 The April 20-21 conference at San Jose State University brought together 400 students from 50 campuses.

Ruben Gonzalez, son of activist/ singer Pedro Gonzalez (whose life is depicted in the film Break of Dawn), gave a moving account of the injustices his father faced at the hands of the U.S. government.

In other resolutions, MEChA reaffirmed its commitment to the principles of affirmative action, and to continuing its working relationship with the other statewide students of color networks. In a political atmosphere that has pitted students of color against each other, MEChA vowed to never pursue its goals of equality and self- determination for Chicano and Latino people at the expense of any other nationality.

Since 1969, MEChA has grown as a student network committed to opening the doors of education for Raza and keeping them open. In the words of Maria Rios and Anabel Ibanez, “MEChA was established by and for Chicano/Latino students as our special home away from home in college and has grown to an institution of our people.”