Who really won the vote?

The country is in turmoil, as many denounce the official results as a fraud, after waiting over a week for the Federal Elections Commission to come out with its dubious totals. 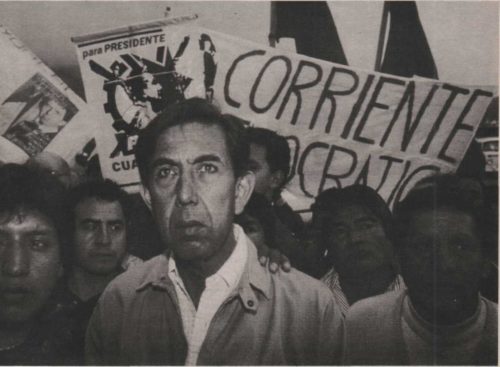 On July 13, thousands of people marched in driving rain through downtown Mexico City, chanting “;E1 pueblo voto, y Cardenas gano! ” (The people voted, and Cardenas won!) Cardenas addressed the people, saying, “We will not accept the fraud. We must not give in. We must defend the popular vote . .. and build committees to defend our rights.” Cardenas declared, “In this struggle, we will go as far as the people want.”

Cardenas will speak again on July 16 at a major rally called by the FDN and the Mexican Socialist Party (PMS), at Mexico City’s Zocalo, facing the presidential palace. A national campaign is being launched to expose the fraud and to defend the vote through legal means, avoiding provocations.

The PRI, which has never lost a presidential election in 60 years, has refused to concede defeat, though it admits that Cardenas swept Mexico City (where the PRI lost every voting district),

Cardenas’ campaign became a vehicle for the new popular movement.

But even the figures the PRI was willing to publicize our revealing. Salinas received the lowest vote in history, 50.4%, with Cardenas at 31.1%. In the Senate, where the PRI has dominated all 64 seats for half a century, the Federal Elections Commission granted the FDN four seats. In the Chamber of Deputies, opposition parties won 240 of 500 seats, smashing the PRI’s traditional two-thirds majority.

The turbulent elections show the people’s anger at the PRI’s economic policies and political stranglehold. While the people live in grinding poverty, they have seen the government sell off the country’s oil and allow foreign takeovers of Mexican companies, to pay Mexico’s enormous $105 billion foreign debt.

Jose Alvarez Icaza, PMS candidate for senator from Mexico City, told Unity, “(The elections showed) that the PRI does not have the support of the people. In fact, what the PRI will now do is tantamount to a civilian coup.”

A new popular movement is spreading across Mexico, with Cardenas’ campaign providing a national vehicle for progressive opposition to the PRI.

Until recently, the main opposition force was the rightwing National Action Party (PAN), encouraged in the mid- ’80s by U.S. Ambassador John Gavin as an outlet for popular discontent with Mexico’s one-party rule, and a conservative “buffer” along the U.S.-Mexico border where the PAN is strong.

But with the increasing unity among Mexico’s left groups, and with the formation of the PMS last year, another pole of opposition emerged. Cardenas left the PRI in 1986 in protest of el dedazo (the PRI’s corrupt system for appointing the next president), and decided to run against the PRI. The uniting of Cardenas’ FDN with the PMS strengthened the left-patriotic opposition and unleashed a flood of mass activity.

Cardenas, the son of Lazaro Cardenas, Mexico’s most beloved past president, was propelled by the new mass movement and by the FDN’s electoral alliance with the left. As a result, he came out in favor of land reform, higher wages for workers and a restructuring of Mexico’s foreign debt payments. Cardenas’ campaign rapidly outstripped the PAN and began to close in on Salinas in the days before the vote.

Most importantly, all over the country, the masses of people are becoming a political force for the first time in many years. In one community of some 30,000 in southern Mexico City, the Movimiento Popular and the Christian base communities have been fighting the PRI borough chief to get water. Just a year ago no one even thought of voting the PRI out. But on July 6, some 80% voted for Cardenas.

Cuauhtemoc Cardenas and the Mexican people have launched a progressive movement that, in the space of eight months, has moved mountains and dinosaurs. But the struggle will now be more intense and dangerous, as it is with any wounded animal.