Chicana workers and community wage three-year struggle. If the
union wins, par­ents and children win, too

It covers the mostly Chicana workers at four child care centers in East Los Angeles, the country’s largest Chicano-Mexicano community. But the three-year unioniza­tion struggle is not over yet. The LACCDC board has yet to sign the contract, and the workers may have to mobilize to the February 10 board
meeting to pressure them to sign.

The state government is also posing obstacles. The California Department of
Education, which provides $1 million of LACCDC’s $1.5 million annual budget, fears that recognizing the union would set a precedent for other state child care agencies. So the state is threatening to put the LACCDC under“conditional funding” and is seeking ways to reduce the funds available for child care
staff wage increases.

The struggle has focused on issues of quality and afford­able child care, the right
of Chicanas to unionize and community control.

The child care workers won union representation by AFSCME Local 1108 two
years ago, by an overwhelm­ing 2-1 margin. But to win, they had to defeat various management movidas, includ­ing the appointment of Wendy Garen as executive director in 1985. Garen dismantled the collective functioning of the agency in management efforts to transform it into “childcare-for-profit.” Garen’s racist policies infuriated workers and community when she fired one Chicana for ques­tioning what she was doing and she routinely harassed pro-union workers. 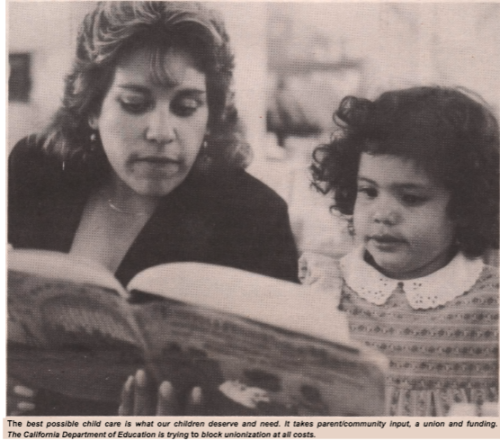 Through mass pickets and community pressure, Garen was put on probation in 1986 and a new child care board of directors was put in place in 1986- 87. These steps opened the way for unionization.

But it took two years of ne­gotiations, through AFSCME negotiating committees set up at each child care site, to come up with the current contract agreement.

Once signed and imple­mented, the contract will be a big advance for child care workers. It provides for health benefits and better working conditions, a union grievance procedure, training and edu­cational programs for staff and teachers.

In turn, this could bring improvements in child care services, with better trained bilingual staff and lower turn­over in this traditionally low- paying field.Over 70% of those with children in the LACCDC child care centers are Chicana and Latina women on “workfare” — welfare mothers who must work at slave wages under Gov. George Deukmejian’s state workfare program enacted in 1985. State workfare fails to provide for job training, education or child care, so many mothers enroll their children in the LACCDC centers because of their more affordable child care rates. Child care workers provide a valuable and vital service, and when the union wins, the chil­dren, parents and community win, too.

The East LA child care struggle is significant in this era of Reaganism, Simpson- Rodino and “English-Only.” The LACCDC program itself is a product of militant Chicano community struggles waged 20 years. The current struggle is to ensure that the services won through past struggles will be con­trolled by the community.

Gilbert Sanchez, a repre­sentative of AFSCME Local 1108, told Unity, “Right now the state is trying to intervene to prevent the staff from hav­ing any union representation whatsoever. It’s going to take an alliance between the staff, parents and community to stop them from doing this, and to keep the program under the control of the com­munity and the people it’s supposed to serve.”