MARTINSVILLE, VA. — In one of the largest industrial organizing campaigns of recent years, 3,000 textile workers at the Tultex Corporation began organizing a union this past June.

Tultex and several other companies here produce fleecewear, making this the “Sweatshirt Capital of the World. ” 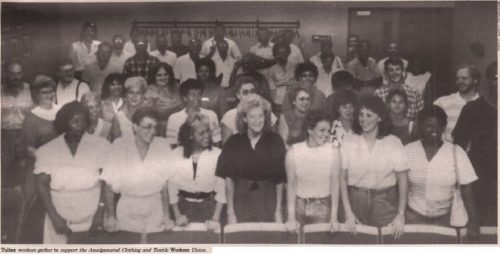 Together with organizers from the ACTWU (Amalgamated Clothing and Textile Workers Union), the workers built a strong in-plant committee and forced a union representation vote in early September. Almost 400 challenged ballots will decide the outcome. The workers and ACTWU are committed to keep fighting, with a second election if that is necessary. – Nancy Peckenham

When we first began organizing in early June, we were fed up with the rate cuts and with the favoritism in the Tultex plant.

In two or three departments, people’s pay was cut from $9 to $4 an hour. The favoritism was tremendous in my department. People who have been there 30 years make what I do — $7.63 an hour. It became increasingly obvious that individual growth with this company would be all but impossible without a union.

During the next few weeks, we frequently became discouraged. I remembered as a child how my parents came home from work every day tired and complaining. I remembered their hopes that their children would never have to work under the conditions that they did. And now, with two children of my own, I realize how they must have felt. This became a driving force for me as well as others.

We faced many obstacles. The company attempted to include all the plants in Virginia and North Carolina in our election, because they knew we had not built support there. We endured eight days of hearings with the National Labor Relations Board (NLRB).  They decided in our favor, to include only the Martinsville plants. It felt good to know that a corporation as powerful as Tultex couldn’t always win.

As a spokesperson for the employees, I relayed our struggle to the media. It became increasingly difficult to get unbiased coverage. The editorial column and the morning “chatterbox” radio program were bombarded with letters and calls ridiculing our efforts. We responded with letters and calls of our own, attempting to inform the public of what we were really trying to achieve–some control of decisions that affect our lives.

We encountered enormous fear and intimidation. Tultex played upon the least outspoken employees. We were all grouped together to see brainwashing films depicting unions as violent organizations that lied to employees to get the dues money. Employees were bussed in from other plants, plastered with Tultex T-shirts and carrying picket signs proclaiming: “Union-free and proud to be.” We all wondered how many would have come without being paid overtime and given free meals and transportation by Tultex. A great deal of money and effort was being spent to keep our union out.

Tultex was to present a list to the union of all eligible voters, but it had only initials instead of full names. It was padded with supervisors, retirees, and employees who had quit or passed away. This led to endless hours of going through directories to find out who everyone was. We had our work cut out for us.

The first day of voting, September 6, confusion reigned. Tultex finally produced a list with full names 24 hours before the election. But, whether by accident or not, they mixed up the lists. This led to NLRB challenges in entire departments. The company blamed the union and said all challenged ballots would be revealed to the company, so some workers were intimidated not to vote.

We knew it would be close. The count was against the union, 1,370 to 1,158, with 392 challenged ballots. The challenged votes have to be investigated, and we may not know the final outcome for weeks. We all knew Tultex had broken many labor laws, and we voted unanimously that night to try to overturn this election. Still, I felt as though we had lost.

The next day I was presented with a dozen roses from the employees in my department.

Attached was a card that said, “Thank you for your support and devotion. We love you – the Cutting Dept.” All the wondering about how everyone had voted didn’t seem important now. With all the lies and deceit Tultex has used, truth and honesty will prevail in the end. The spirit of brotherhood is alive and well in the foothills of Virginia.

Denise Young has worked as a cutter at Tultex for five years. Nancy Peckenham was an ACTWU organizer at the plant.