The 350 chanting pickets circled the big General Motors plant in Fremont, California, looking for an unlocked gate. There weren’t any unlocked gates — though the plant, slated for an indefinite shutdown, wasn’t supposed to close for another five days.

Four hundred miles south in Ontario, 1,000 workers in the General Electric Flat Iron plant tried to work as company security guards looked on. They had fought a shutdown for the past eight months, but it was coming the next day. Rumors went wild: workers would seize the plant or demonstrate on company property.

GE didn’t wait to find out if the rumors were true. At 2:30 p. m., without even notifying the supervisors, the company told workers they had five minutes to get out. When workers came back the next day, the plant was shut tight. 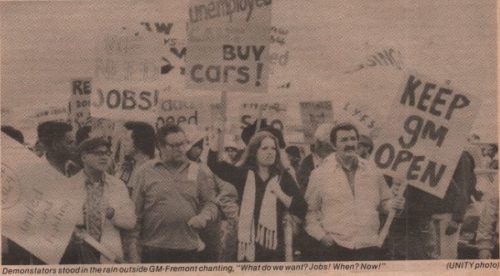 Fremont and Ontario are two of the latest battle grounds in a nationwide war against plant closings. Across the country, 16 local coalitions have mobilized around the issue. Their makeup reflects the range of forces with a stake in seeing the” shutdowns stopped. Workers at the particular plant, workers in other industries and local union officials are affected. Small- and medium-sized businessmen see their customers stop buying as unemployment mounts. Churches, community groups and local politicians are concerned about the impact on the city.

At GM and GE, workers are fighting plant closings with community allies.

In Fremont and Ontario, workers mobilized all these forces to demand “Jobs Now!”

The stakes are getting higher. Unemployment is 8.8% nationwide and probably will go up. Economists are now calling the economic crisis a depression, as unemployment in some midwest cities has reached 1930’s levels.

Plants continue to close in auto, steel, rubber, food processing, lumber and other industries. As companies adjust their profit-making strategies to suit the hard times, workers are learning that they have allies in the fight against layoffs.

An injury to all

For years, Ontario has billed itself as the “iron capital of the world.” The GE Flat Iron plant has been a fixture of the town’s economy since 1905. In 1980, it turned out 60% of the metal irons sold on the world market. Most of its workers have between 8 and 25 years seniority.

The closing of the plant is the third major shutdown to hit Ontario in the space of a year. It is expected to cost the city an estimated $91 million in business activity. Tax revenues will dry up as well.

The figures in Fremont are, if anything, more dramatic. The closing of the plant pushes the six-month figure for layoffs in the area to 15,000. The community will be robbed of over $280 million in worker payrolls and purchases from local suppliers.

Workers from both United Auto Workers (UAW) Local 1364 and United Electrical Workers (UE) Local 1012 actively fought their plant closings. They took a firm stand that the plants should remain open, pushed it aggressively and pointed out that it was everyone’s struggle.

In Ontario, clergymen and local businessmen bombarded GE with petitions, letters and full-page newspaper ads. The City Council passed a resolution condemning the shutdown. Local government took up the fight to keep the plant open and stuck with it through many twists and turns.

UE Local 1012 developed a strategy geared to its particular situation and used it to involve the rest of the community through eight months of struggle. GE had decided to close the plant, thinking it could save on labor costs by shifting from metal to plastic irons.

Investigation by the union revealed that a majority of consumers would probably prefer metal irons if given a choice. Armed with this knowledge, the mayor of Ontario traveled to Switzerland and elsewhere lining up potential buyers for the plant. Meanwhile, the union, convinced it was economically feasible, began developing a proposal for the workers to buy out the plant themselves.

In the end, GE refused to sell, simply because it was afraid any metal irons the plant produced would undermine the market for its own plastic models. GE was fought by a vicious San Diego firm which plans to use the plant to make electric motors. It will probably hire nonunion workers and pay them 40% less than UE workers now receive.

But the new owners will have an aroused community to deal with. And GE isn’t out of the woods yet. At the April 28 GE stockholders’ meeting, four national church organizations will be calling the company on the carpet for its actions in Ontario.

Fremont workers face a different situation. The UAW is badly divided over an International plan to grant major concessions to GM and Ford in hopes of preventing more layoffs. The International^ blames Japanese imports for layoffs and claims shutdowns can be stopped if workers cooperate with the company. This approach would make it impossible to mobilize broad community support and actually stop shutdowns.

The GM workers who pulled together the Fremont rally rejected that approach. They targeted the company, whose greed for profits was about to throw 5,000 people out of work. GM workers were able to gather wide support.

Fifteen speakers at the Fremont rally included two county supervisors, a city councilman, representatives of Congressman Ron Dellums and Don Edwards, a spokesperson for the county Central Labor Council and officers in several unions whose members were effected by the shutdown.

“That company has no goddamn heart for nobody!” shouted GM-Fremont Shop Chairman George Nano as the crowd roared agreement. “They treat people like a bunch of machinery.”

Barbara Hanfling, a rank and file activist in the plant, added, “GM wants to point the finger at everyone but themselves …. We’ve got to keep fighting. No shutdown should go unchallenged.” Right now nearly every politician in the Fremont area is jumping to support the GM workers’ struggle. Local 1364’s leaders hope to parlay this into some kind of legislative action to stop the shutdown. But the success of this or any other strategy depends on the members of the local holding their ranks together, staying in contact and maintaining their organization — even though they no longer see each other each day on the shop floor.

Today, workers and the communities bear the full burden of plant closures. But the struggles in California and elsewhere show that labor, community and religious groups are learning to unite. With efforts of this kind, the capitalists will not get off the hook so easily when they decide to shut plants down.