I don’t know who did this painting, nor whose idea it was — what I do know is that it is a true work of art that encloses a sad but also brave reality about our people.

Our people who valiantly cross the border putting everything aside. Some­ times risking life itself, they are worthy of respect despite the humiliation. It is a premeditated action to come to this coun­try with the hope of doing a little better. In reality they are treated as intruders and violators of the law. Is this the land of liberty under God? I don’t know. What I do know is that this painting is very valuable. I see in it the growing unity of our people in a massive movement which struggles humanely against the rash actions that threaten to separate our families, working people who pick the harvest early in the morning. 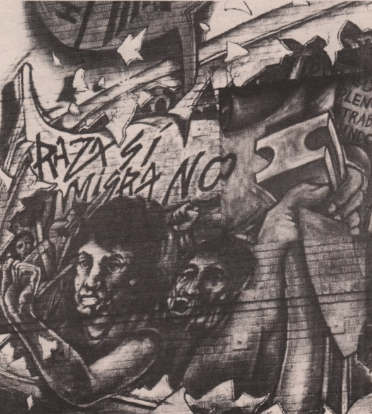 Mercedes Jauregui came here from Mexico 15 years ago. She is a tenant at the Maravilla Housing Projects and is active in fighting evictions of undocumented.