Saving Trees and Jobs in the Redwood Empire

For generations, the virgin redwoods and Douglas fir of California’s North Coast provided lumber for the nation, jobs for local communities, and a life support system for countless plant and animal species. 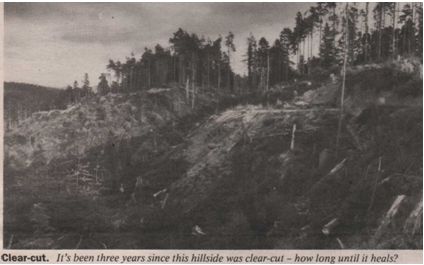 Today the “old-growth trees” (forests that have never been logged) are virtually gone, except for 76,000 acres preserved in government-owned parks. Trees in Mendocino County are being cut three times faster than they can grow back. Indiscriminate logging, called “clear-cutting,” has eroded the soil, fouled local streams, and sent commercial salmon and steelhead catches to record lows.

In the 1970s, outside corporations took over the locally run industry. Two giants, Georgia Pacific (G-P) and Louisiana Pacific (L-P), now own 80% of Mendocino County’s industrial timberland. The fate of the forests and the community are now decided in boardrooms by financiers whose only concern is the quickest possible profit.

Trees that take 50-100 years to mature are being mowed down after as few as ten years to maximize the yield from the land. These half-grown trees produce inferior lumber — loggers scornfully call them “pecker poles” and find them a nuisance to work with. But L-P has found a way to pulverize them and glue the chips together with toxic formaldehyde to make pressed wood, which it promotes as the building material of the 21st century.

In neighboring Humboldt County, locally owned Pacific Lumber was victim of a hostile takeover by Wall Street high roller Charles Hurwitt. He is liquidating its vast timber reserves to pay off his junk bonds, thus threatening 11,000 acres of old-growth redwood.

“The multinationals exploit the labor and the resources of this county and send all the money out to shareholders who don’t live here,” local logger Walter Smith told Unity. “But we are the ones who do the work.”

Robert Vargas, a 15-year veteran of the G-P mill in Fort Bragg, describes the corporations’ forest practices as “rape and run.” “If they keep cutting the way they’ve been cutting, in five years this mill’s gonna be empty,” he told Unity.

A debate is raging over the forests’ future. Environmentalists held rallies in Fort Bragg and nearby Eureka over the summer. The Sierra Club and others are sponsoring the “Forests Forever” initiative (Proposition 130) on the November ballot, designed to halt clear-cutting and save the remaining old-growth trees.

The corporations organized counter-demonstrations. Claiming Forests Forever would throw thousands out of work, they put up their own initiative and claim it will save jobs and “ensure that more trees are planted than are cut.”

But Walter Smith points out, “How can you harvest every 20 years and expect the forest to grow back?”

“Say you take a clear-cut on a 40-foot slope and plant new trees,” local logger Duane Potter told Unity. “You’ve got the deer coming in and eating the seedlings. You’ve got the weather and the bugs. Very few of them make it – something like 12%.”

“Logging is a necessity, but you have to preserve the forest,” says Gene Parsons, who spent several years in the woods repairing logging equipment. “That takes more time and more thought, and makes less money. The corporations are walking away with unprecedented profits because they’ve increased logging and can keep their prices down.”

Parsons explained how monopoly control of the land lets the corporations shift legal and financial risks onto the independent loggers, who must bid against each other for contracts to cut L-P’s and G-P’s trees.

“Say environmentalists go to court and say, ‘L-P has done our environment irreparable damage and we want to sue them,'” local activist Meridian Green told Unity. “It would be very difficult, because they’re not legally responsible for their logging. Responsibility is doled out among every small logger operating on a shoestring.”

As for the workers, in the 1980s L-P drove the woodworkers’ union (IWA) out of its local mills. Five years ago, G-P forced union members at its Fort Bragg mill to take a 25% pay cut or face a plant shutdown. Robert Vargas told Unity the mill’s work force has already been cut in half, while G-P spends millions to eliminate more jobs through automation.

Job security is a real concern. The memory of the depression of 1981-2, when thousands of lumber workers were idled and many longtime residents had to leave, is fresh in people’s minds.

But Walter Smith argues, “We could survive better in this county if we got rid of the big corporations and kept it local. We could do less harvesting and keep the work force employed. We could replant, do more manufacturing, do the things the corporations won’t do.”

“We’ve got to come to our senses and see what we’re doing,” says Duane Potter. “We don’t own the land, we just inherited it, and our kids are gonna inherit it from us. To think that we can just go in and destroy it– it’s ridiculous, and it’s got to stop.”