STOCKTON—The people of Stockton, Cali­fornia, are still trying to piece together their world that suddenly came to an end at 11:43 a.m. on January 17.

Five minutes later, five chil­dren lay dead and 42 others were writhing in pain. Purdy fired over 100 shots, using the last bullet on himself.

Killed were four girls, Sok-him Ang, 6; Ram Chun, 8; Oeun Lim, 8; and Thuy Tran, 6; and one boy, Rathanar Or, 9. Four were Cambodian and one Vietnamese. Local hospitals were ill-prepared for an emergency of this size. There were not enough ambulances, and helicopters were brought in to transport the critically injured. Emergency rooms were so full that some children were taken to hospitals 40 miles away from Stockton.

Hundreds of worried par­ents quickly descended on the school. But no information was immediately available, and the language barrier was insur­mountable. Some 71% of the students at Cleveland are Southeast Asians, mostly Cam­bodians, whose parents speak little English. The number of bilingual classroom aides and interpreters was simply not enough. There was no record kept of which hospitals the wounded were taken to, and parents drove from hospital to hospital searching for their children. 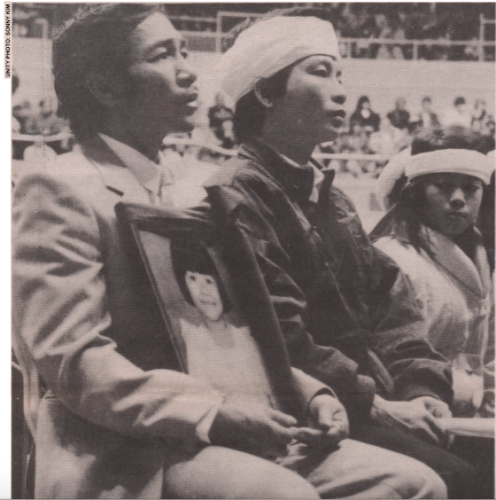 In the aftermath, fear and anger are draining emotions. Post-traumatic stress disorder is evident throughout the city. Over 50% of the Asian stu­dents at Cleveland have not returned to class, and many children cannot sleep or have nightmares. Many Southeast Asian families, already refu­gees from war-torn home­lands, are now considering leaving San Joaquin County.

The fact that the attack was racially motivated is being curiously downplayed. It is known that Purdy had a history of alcohol abuse and Rambo complex,” dressing in camouflage clothes and buying paramilitary rifles.

His “wanna-be-Vietnam- vet” syndrome coincided with a hatred for Asians. He told co-workers that Viet­namese were taking jobs from “Americans, ” — in this area of high unemployment. Anti-Asian violence in Stockton has been a grow­ing problem since South­east Asians arrived in this community five years ago. Cambodian families have been victims of armed rob­beries and firebombings. In 1986, a safety study by the Stockton School District reported that violence against Asian students was growing.

Samchit Koy, a spokes­person for the Cambodian community and mother of three Cleveland students, believes Southeast Asians were deliberate targets. “The Americans, the white, see we’re different,” Koy said, “ … The shooting proves they hate us.”

Other Stockton minority leaders support Koy’s view. Ray Zapata, an anti-gang counselor for the Council for the Spanish Speaking, and Todd Summers, presi­dent of the local NAACP, believe the shootings were racially motivated and want an investigation.

In addition, Southeast Asian parents want armed guards around the schools. They want more Asian teachers and counselors. In a school district with a 30% Asian enrollment, only 8% of the teachers and 2% of the counselors are Asian. Parents also complain that their children are placed in bilingual classes where staff can only speak Spanish.

Most importantly, the Cambodian community called for a public day of mourning on Jan. 23. Though the Stockton school district refused to close the schools that day, and urged the children to return to class as if nothing hap­pened, most Southeast Asian students and many Black and Latino children boycotted classes to attend the public memorial at the Stockton Civic Auditorium.

And, the killings in Stockton raise a lot of questions about anti-Asian violence that remain to be answered.