A fight for Hawaiian land, history and culture

People from all walks of life came to Iolani Palace here on March 20 to demand that the U.S. and several other countries on the rim of the Pacific call off their planned destruction of the island of Kaho‘olawe during the RIMPAC military exercises which began two days later, on March 22.

The 175 people at the rally heard Puanani Burgess from the Protect Kaho‘olawe ‘Ohana, as well as speakers from Greenpeace, Malama Hawai‘i student organization, the Sovereignty for Hawaii Committee, the Committee in Solidarity with the People of El Salvador, and from the countries of Tonga and the Republic of Belau, reflecting the broad support for the struggle to protect Kaho‘olawe. Hawaii’s Lieutenant Governor Jean King also spoke in favor of stopping RIMPAC. Demonstrators then marched to the governor’s mansion and through the state capitol. 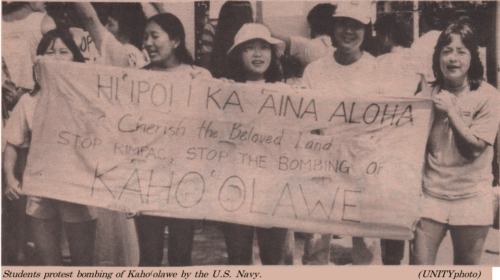 The rally topped a month of programs, press conferences, radio talk shows, hearings at the state legislature, and an international petition drive against RIMPAC by the Friends of Kaho‘olawe, a coalition initiated by the Protect Kaho‘olawe ‘Ohana {‘ohana means family). There were also two earlier mass protests on other islands — a March 18 rally on Hilo, Hawai‘i, sponsored by the Aloha ‘Aina Education Center, and a March 19 rally on Maui.

RIMPAC and the bombing

The U.S. Navy first seized control of Kaho‘olawe during World War II, when martial law was declared in Hawai‘i. Since then, the island has been pounded regularly by bombing practice and other military training, such as the RIMPAC exercises. RIMPAC is a joint training exercise sponsored by the U.S., roughly every two years since 1971. For several years, the U.S. has invited Australia, New Zealand, Canada and Japan to bomb and shell Kaho‘olawe as part of RIMPAC.

The Navy says the best thing that Kaho‘olawe can be used for is a target for bombings — claiming it is too small, too dry and too eroded to be anything else. But the Navy knows it is bombing more than an uninhabited wasteland when it uses Kaho‘olawe as a target.

The Navy knows, because after almost five years of struggle waged by the Protect Kaho‘olawe ‘Ohana, the Navy was forced to make a survey of Kaho‘olawe, which turned up 544 archeological sites recording nearly 1,000 years of Hawaiian history. Kaho‘olawe has the second largest adze quarry in the Hawaiian islands, and its high point, Moa Ula, was used by ancient Hawaiians as an observation point. They used it to plot their way to Tahiti, as well as study the tides and stars.

The struggle for Kaho’olawe

The ‘Ohana’s struggle began in 1976, with five occupations of Kaho‘olawe in which Hawaiians braved Navy bombs to get back the island. The ‘Ohana popularized the concept of aloha aina — love of the land — that became a call which mobilized thousands to reclaim Kaho‘olawe along with Hawaiian culture, identity and land.

Support for the ‘Ohana’s struggle grew very broad, from the grass roots to the state legislature and politicians. In 1976, the Hawai‘i state senate and house passed a concurrent resolution calling on the U.S. government to restore and return Kaho‘olawe to the State of Hawaii. Kaho‘olawe became a source of history, culture and pride for Hawaiian people — a struggle that all nationalities in Hawai‘i learned from and supported.

In 1980, the Navy was forced to grant the ‘Ohana stewardship over Kaho‘olawe, which gave the ‘Ohana some control of the use of the island. Among other rights, the ‘Ohana could gain access to Kaho‘olawe for ten days out of every month (except in winter when the seas are too stormy). During that time, bombing stopped, and anywhere from 45-100 people could enter the island. Even then, the Navy sent one military personnel for every 20-25 people, to locate the live bombs still on the island. The Navy was also to take some conservation measures and to restrict the amount of real artillery used in the exercises.

In March 1981, the U.S. government officially recognized the significance of Kaho‘olawe and placed the entire island on the National Register of Historic Places. This granted the island a historical status supposedly equal to places like the White House, though even this has not been enough to stop the bombings by the U.S. military. The U.S. government would have to take other steps to actually transfer control over Kaho‘olawe from the U.S. Navy back to the Hawaiian people.

The Navy’s refusal to return Kaho‘olawe to the people of Hawai‘i comes from more than its need for a practice area for U.S. war preparations in the Pacific. As the speaker from the Malama Hawaii student organization pointed out at the March 20 rally, “The Navy doesn’t have to bomb the island — they want to. They want to destroy a whole people’s land, culture and history right in front of our eyes. And now, with RIMPAC, the U.S. has stepped up its arrogance and destruction by inviting other countries to do the same thing!’’

At an earlier program on RIMPAC at the University of Hawaii, Puanani Burgess talked about what is at stake in the struggle for Kaho‘olawe. “One of the meanings of the ancient name of Kaho‘olawe is the place where the driftwood gathers. The wood, once alive and strong, was all broken up. It’s just like the Hawaiian culture, all broken up, and like the driftwood, it will gather at this place. It also means a beacon to show the way for people to come together to assert their right to control how the land is used, and it could be the beginning of that restoration to self-determination.’’

Students build the fight against RIMPAC

The room was filled with nearly 100 people, but everyone was quiet while they listened and were moved by Puanani Burgess as she spoke about the struggle for Kaho‘olawe. “The positive (force) of the Protect Kaho‘olawe Movement is aloha ‘aina (love of the land) and malama ka ‘aina (caring for the land)…. And aloha ‘aina is not a suggestion, it is a directive, a command to go forth, because to protect the land means that it in turn protects you. The movement to protect Kaho‘olawe is an opportunity to test the warrior within us. It is a time when grassroots people can join together and really make a difference.’’

Puanani Burgess is from the Protect Kaho‘olawe ‘Ohana, and she was speaking at a program at the University of Hawaii on March 3, sponsored by the student organization Malama Hawai‘i. Malama Hawai‘i began in early 1980 as students came together to support the struggle of the Hawaiians on Sand Island to stay on their land. Malama Hawai‘i formed out of this group a year later, to support the rights to practice local culture, Hawaiian land for Hawaiian people, and to support local community struggles for control of the land.

Kaho‘olawe has been close to the hearts of the students in Malama Hawai‘i, and they organized this program when they heard about the upcoming RIMPAC exercises. Malama Hawai‘i members talked about their own experiences on Kaho‘olawe during an access (visit) conducted by the Protect Kaho‘olawe ‘Ohana, and how it gave them a deeper understanding of the need to get involved in the movement to protect the island.

“The biggest thing I learned on Kaho‘olawe is that it is something worth saving. It has a lot of historical and religious sites and is one of the last remaining links a Hawaiian has with his past.’’

A woman speaker added, “Kaho‘olawe was portrayed as a useless rock. But when I saw how big it was  .. …. it’s an island! Coming from Guam, an island one-third the size of O‘ahu, I could not conceive, could not envision, that they were destroying this island.”

The students encouraged others to get involved. “Politics means getting involved in what’s happening around you .. . things that directly affect the people of Hawai‘i …. As a member of Malama Hawai‘i, my power and gratification comes from the desire to share what we have and what we know.”

Several students were so enthusiastic about the program that they did get involved in both Malama Hawai‘i and the struggle for Kaho‘olawe. After a later meeting to organize campus opposition to RIMPAC, a student said, “I looked around and saw the many faces of the Pacific. We are many different nationalities, but there is a common thing that unites us — this feeling for Hawaii, our home.”