Super Barrio Gomez is a living legend among Mexico’s poor. This masked hero, dressed in red leotard, tights and a gold cape, emerged from the ruins of the 1985 Mexico City earthquake. As Super Barrio, an ex-wrestler and street vendor, puts it, “I step down from the ring to fight for the people. ”

In the barrios, those facing eviction may fire three rockets into the air to summon Super Barrio, or call his hot line number.

A true people’s hero, Super Barrio dropped out of the 1988 presidential race in favor of Cuauhtemoc Cardenas, who in turn cast his own ballot for Super Barrio.

During a recent three-week tour of California, Super Barrio championed the rights of U.S. residents who were blocked from crossing back over the border after Christmas visits to Mexico. U.S. immigration officials even tried to disrupt his tour by detaining him in L.A. for several hours. Super Barrio commented that many undocumented farm workers had the courage to attend his Fresno program and accuse immigration officials of abuses. 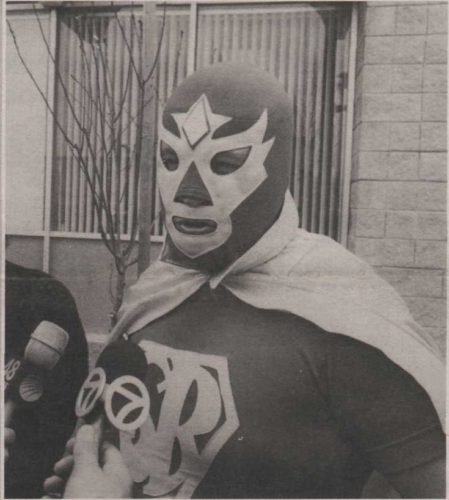 A   I was invited by some organizations of Mexicanos who live here, in order to get to know some of the problems they have and discuss possible solutions, to explain our experiences in mass organizing in Mexico City, and to find ways to bring both of our struggles closer.

Q  What are the living conditions there?

A   We are living in the worst economic crisis ever. There are more and more people without jobs and homes, the young people cannot get into the university, and wages are miserable. That is why many Mexicanos cross the border to come here. The Mexican government prefers to pay the foreign debt and to leave people in complete misery.

Politically, we are living under a 60-year dictatorship of the Institutional Revolutionary Party (PRI), which has lost elections but doesn’t accept those defeats. There has been an increase in repression since (President) Salinas came in; 40 people have been murdered for political reasons.

Q  Tell us a little about your organization.

A   I am active in the Assembly of Barrios in Mexico City. It basically fights for housing rights for the poor, for renters, and for those who have been evicted. There are over 50,000 families from throughout Mexico City in the Asamblea, and we have been demanding credits for plots of land and for new housing construction. The fight has been going on for two years.

We are also struggling for democracy by supporting Cuauhtemoc Cardenas and helping to transform our country. (See Unity interview with Cardenas, January 30, 1989.) People are learning to struggle. The only way we get results is to organize.

Q  What is your goal as Super Barrio?

A  I am fighting so that poor people can have a place to live decently. I don’t live in the sky. I live with the people. I am like all of you. You are my strength. I cannot lift a car or stop a train or catch a falling airplane. No one can. But together … we can confront whatever problems we face.

Juan Sermeno is on the steering committee of the San Jose Rainbow Coalition and he was a leader of the Latino janitors’ struggle at GE in San Jose.