The Dam Bursts in Watsonville

The largely Mexicano and Chicano, and overwhelmingly women workers, are determined to run their strike by themselves. While welcoming support, they want no “condescending saviors.” Armando Morales said to UNITY, “Unlike the Teamsters officials who have not tried to educate us, our supporters are opening our eyes and helping us so that we can run our own strike and our own union.” 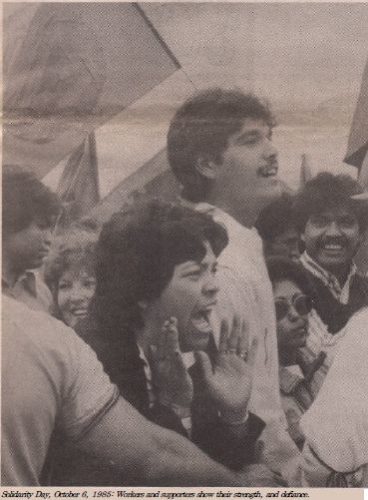 The strike, as UNITY goes to press, is going well. The canneries are operating at a fraction of their capacity. Because of the strong support from Watsonville, not one scab has been recruited there. Already Shaw, Inc. is saying it wants to talk.

But the workers are continuing to organize both in Watsonville and all of northern California. Support for the strikers is growing every day and has been especially strong from the United Farm Workers (UFW), MEChA (Chicano student organization) and other Chicano groups. Also, many trade unionists, students of all nationalities and progressives have come out in support. On October 6, 800 supporters joined over 2,000 strikers and their families in a massive show of force at the gates of the two struck plants. The company owners, afraid of being bombed, watched the march from the roof of Watsonville Canning.

In addition to fighting the company and the bosses’ notorious union-busting law firm, the workers have had to struggle with the Teamster hierarchy itself. Teamster leaders have a long history of negotiating cannery agreements with no strikes and almost no rank and file input.

After the unilateral takebacks by the canneries, thousands of workers demanded a strike and the union officials decided to ride the tide and allow a strike vote. At a meeting of 1,500 workers it was almost unanimous in favor of walking out.

Significance of the strike

The seven unionized canneries in Watsonville produce 50% of all U.S. sales of frozen broccoli, spinach, brussel sprouts and cauliflower. Watsonville is to frozen food what Salinas is to iceberg lettuce — Big Money.

Under Reagan’s reign, each strike is significant because it shows that the working class is fed up with concessions, plant closures and union busting. The Watsonville strike is this and more.

The strike reflects the growing militancy of lower stratum Mexicano and Chicano workers and will have a profound impact on the future of unions in the farm and food processing industries, the Chicano Movement and on Reagan’s sunbelt strategy.

The strike comes at a time when Latino workers are asserting their rights on the job and within the Teamsters union. The recent victory of a mainly Mexicano and Chicano rank and file slate in Teamsters cannery Local 890 in Salinas and the forming of rank and file groups in nearby Hollister, Gilroy and King City show the growing strength and long overdue empowerment of Mexicano and Chicano workers.

All this is also spelling an end to the divisive efforts of Teamsters locals to raid the UFW. Earlier, Teamsters Local 890 had raided the UFW. But newly-elected Mexicano and Chicano leaders, who have no interest in raiding a fraternal union, put a firm stop to the raiding. In turn, the UFW was key in winning AFL-CIO unions to support the Watsonville strike. The growing activity and unity of Mexicano and Chicano workers will be a powerful progressive force in the entire California workers movement.

In a larger sense, the growing activity of lower stratum Chicano and Mexicano workers may challenge the “sunbelt strategy” of Reagan and the rich. This sunbelt strategy calls for the shifting of new plants to the Southeast and the Southwest where wages are lower, unions weaker and local government more conservative. It is no coincidence that the “sunbelt” straddles the areas of Black and Chicano concentration.

The Chicano and Black peoples, oppressed, super-exploited and denied voting rights and political power, form a large pool of low-wage workers for the industrialists. Due to the historic racism and chauvinism of trade union leaders these workers are largely unorganized, or else the victims of union bureaucracies that care little for their welfare.

But now, the struggle of the Chicano and Mexicano workers, and the growing activity of other workers, students and all Chicanos, for equality and political empowerment, threaten to destroy the very conditions which Reagan and the large corporations need to fully carry out their sunbelt strategy.

If Chicano, Mexicano and other Latino workers can no longer be super-exploited and suppressed both in the unions and in society, then the lower wages, the backward, do-nothing union leaders, and reactionary, pro-rich, pro-company local and state governments will be more difficult to maintain.

What we see today in Watsonville is only the beginning of this powerful movement which can play a strategic role in ushering in a new era in the working class movement and in the Chicano Movement.

As part of this process of building more unity, the strikers are hooking up with other cannery workers whose contracts are also coming up. They are planning strategy on how to stop the scabs, increase support from other cannery workers in the area and around the state, from the Teamsters and other unions, and from local residents and workers.

Special attention is being paid to activating the Chicano Movement. Already Mechistas (Chicano students from MEChA) are playing a leading role in supporting the strikers. Gloria Betancourt said to UNITY, “We feel so much solidarity with everyone we have met. What especially comes to mind was how quickly the MEChA students mobilized themselves and with such enthusiasm.” Chicano, Mexicano and other Latino workers in other industries are also beginning to step up their support. Rafael Espinoza, vice president of Local 2 of the Hotel and Restaurant Employees Union, the largest union in San Francisco, has offered the use of his office to coordinate outreach in the Bay Area. The Latino Democratic Club, and the Bay Area Region of the Mexican American Political Association (MAPA) are also supporting the strikers.

Support for the strike must continue to be built, but the key to the future of the strike rests in Watsonville.

More than a dozen cannery contracts in Oxnard, Santa Maria, Modesto and Salinas are coming up soon. Workers at Crosetti’s and Smuckers will be voting soon on their contract. More workers could go out. The cannery owners are hurting. The struggle is bound to escalate.

Meanwhile, workers are continuing the pickets, militantly confronting police each day and making do on the $45-a-week strike pay. As Armando Morales said, “We have been patient. We are 2,200 strong. We will not easily give up this strike.”