The Need for a Rainbow Agenda

Force the Democrats to negotiate

The real test of the Jackson campaign must be in its practical use to Black people and the whole multinational working class. That use is not just feel-goodism and cheerleading consciousness raising. (Though for sho’ we need both of those in a desperate way.)

The most important use to the U.S. masses must be not only in raising the issues, mobilizing the people, voter registration, hopefully creating structures and a progressive network to localize the Rainbow Coalition in states and cities across the country, to put progressive candidates into political races after the presidential campaign is over.

But now we must create an agenda for negotiation similar to the Black agenda that came out of the National Black Political Assembly in 1972, which was “sold out” by Black petty bourgeois electoral leadership at the 1972 Miami Democratic Convention. 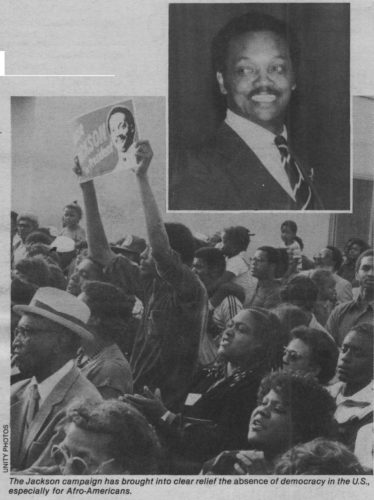 We must also question loud and clear the very method for electing the U.S. President. Simply because to speed the coming socialist revolution, we must constantly demand higher and higher levels of democracy. It is Democracy that threatens capitalism most directly!

For instance, most people do not understand the electoral system, that the American people do not elect the President. The electoral college selected by bourgeois-controlled state legislators actually elects the President. We should point out the insidious hidden denial of democracy this system is, that it is possible to become President of the United States without winning the popular vote, and that this has happened nine times. If we go further, we find the bottom line of this evasion of democracy by the bourgeoisie was to deny political power to the Afro American people in the 19th century. Specifically surrounding the Hayes-Tilden compromise, which ended the Reconstruction, and plunged Black people back into near slavery and “separate but equal.”

The consistent truth that American history teaches is that the existence and influence of Black slavery, the revolutionary promise of the Civil War, the failure of Reconstruction, have always created a lie as American democracy. The truth is that such democracy has never existed vis-a-vis Blacks, and because of this literally has never existed for the majority of U.S. citizens!!

This is, on one hand, the function of the Jackson campaign, to expose such consistent lies, and to show that the truth is the absence of democracy in the U.S. How could there ever have been democracy in a country based on slavery? A country growing rapidly senile, based on the material and psychological dependence on national oppression (and, of course, imperialism).