SAN FERNANDO, CALIF. — The 1,400 Latino workers at Superior Industries here are entering the final stage of their eight-year fight for a union contract.

On May 26, nearly three years after workers voted for representation by United Auto Workers (UAW) Local 645, the National Labor Relations Board (NLRB) granted formal union recognition, requiring the company to negotiate in good faith. The workers must now focus on forcing the company to sign.

David Morales, a former worker fired for union activity, told Unity, “I am happy with this ruling. It teaches us that when we fight for something, we have to fight like this, ” throwing his fist in the air, “not with our face in the ground. The decision is good for the new workers, for our community and for them,” pointing to his newborn child. 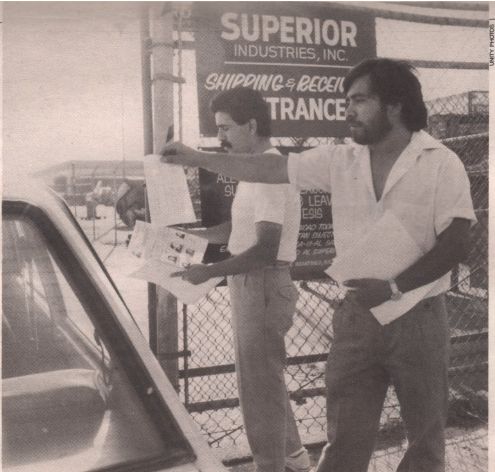 This solidarity and national pride has sustained the workers despite all the maneuvering by Superior. Few union drives in the largely unorganized San Fernando Valley have gone so far or overcome so much. Victory would spur thousands of Latino workers here to fight for unionization in their own plants.

Oppression in the Valley

Lured by tax breaks, a right-wing political climate and what they see as an endless supply of “cheap” Latino labor, companies like Superior have turned the Valley into one of the Sunbelt’s largest concentrations of light industry. Many companies make huge profits by violating labor, health and safety laws.

A leading maker of aluminum wheel rims and other auto parts, Superior posted a record $130 million in sales last year. Its plant is notorious for wretched conditions. Heat in the foundry reaches 150 degrees — hot enough, as some workers say, “to cook your insides. ” Wages start at under $4 an hour. Mangled bodies, even radiation exposure is the price paid for working there. It’s no wonder that worker turnover is nearly 100 percent a year.

But Superior’s attitude is that Latino lives are “cheap,” workers can always be replaced. Arriving in the Valley with dreams of a better life, thousands of immigrants from Mexico and Central America struggle just to survive. Walk down Victory Boulevard any morning and you can see 50 people at the  corner, waiting for someone  to drive by and offer a day’s work cleaning a house or swimming pool, doing yard work or filling in on a construction crew. Add to this the constant threat of la migra (immigration authorities) and daily incidents of racism.

Superior thrives on these miserable conditions. A sign inside the plant read: “Non- English speaking need not apply.” It is not meant to discourage Latino immigrant applicants, who are the vast majority in the plant, but to tell the workers they should be grateful for whatever they get.

Intimidation and mass firings crushed the first union drive at Superior in 1979. Two years later, the workers tried again without success. In March 1984, workers began a new drive under UAW Local 645, with its history of progressive leadership. On August 30, 1984, an active in-shop committee with strong support from the UAW and Chicano community finally won union certification.

Superior appealed to the conservative, Reagan- appointed NLRB. While the NLRB stalled, management carried out a ruthless union- busting campaign. Forty-three workers, mostly pro-union activists, were fired. Others were harassed until they quit. Company leaflets accused Salvadoran workers of being “leftist guerrillas” and attacked the union as “communist sympathizers.”

“But we showed Superior that even if they fire us, they can’t get rid of us,” said Richard Jacquez, a fired leader in the plant. “Fired workers continued to meet. We had to find ways to keep a union presence in the plant, because any worker inside who mentions the union is sure to be fired. So we issued leaflets to the plant, helped workers communicate and figure out how to fight around shop floor issues.”

Chicano community supporters wrote the NLRB demanding a favorable decision. The quiet serenity of a yearly company board meeting in May 1985 was shattered by over 200 angry workers and supporters. Local 645, under the leadership of President Pete Beltran, continued to provide money and staffing at a time when most unions shied away from new organizing drives.

Now the struggle is shifting to force Superior to sign. Mark Masaoka, a Local 645 member who headed up the organizing drive at Superior, told Unity,“To win we’ll need the continued support of the local and the Chicano/Mexicano community, backing up the Superior workers. We have to make Superior pay a high price for any stalling on signing a decent contract. We can combine in-plant organizing with newer approaches like  corporate campaigns. Damaging Superior’s credit rating, filing suits on behalf of injured workers, demanding government investigations of dangerous conditions — we have to hit them on all fronts.”

The struggle at Superior, like the cannery strike in Watsonville and the struggle of FLOC (Farm Labor Organizing Committee) in the Midwest, shows that Latino workers are fighting back — for their jobs, their unions and their people.