LOUISVILE & WAYNESBORO, GA. – On Oct. 13, 18 months after voting to join the Amalgamated Clothing and Textile Workers Union (ACTWU), 600 workers at the Samsons and Delila textile plants here finally won union certification by a unanimous vote of the National Labor Relations Board. 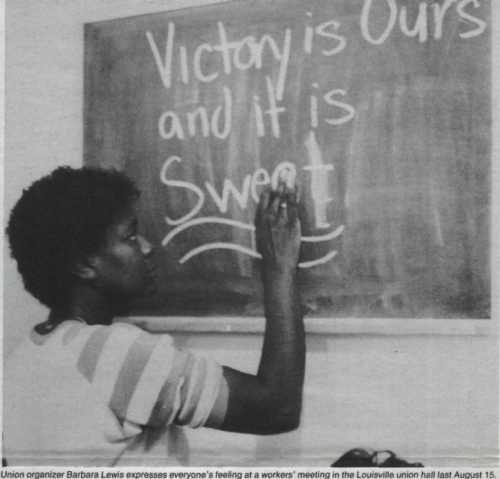 The NAACP has called this struggle a “crossroads of the civil rights and labor movements.” In this traditionally anti-union region, where the old slave market still stands in towns like Louisville, winning union rights is a landmark victory.

Ninety percent of the workers are African American women. When the Samsons plant first opened in the 1960s, amidst corn and bean fields that used to be sharecropped, the pay seemed good compared with the $10-20 a week that women earned cleaning houses in the area. But 20 years later, many Samsons and Delila workers still average just $4.50 an hour, making drapes and novelty curtains sold across the country.

Low pay is not the only problem. Family health insurance takes 25% of a weekly paycheck and carries a $500 deductible – and most workers just can’t afford it. Racism in both plants is widespread. Experienced Black workers are passed over for promotions in favor of the bosses’ family members. A white worker was fired after he told union supporters he had heard two white supervisors say that if the union came in, “a bunch of n——- would be running the plant.”

Fighting for a union

On April 15, 1988, the Samsons and Delila workers shocked the company by voting 413-185 for the union, ACTWU. Since then, the New York-based Lichtenberg Co., which owns the two plants, launched an all-out campaign to keep the union from being certified.

More than 60 workers were laid off or fired, but this did not stop the organizing drive. The workers’ first target was formaldehyde in the plant. Management “knew it was in there, they just didn’t care,” Delila worker Catherine Wilson told Unity. When workers complained of rashes, eye irritation, and shortness of breath, the company said they had poison ivy.

The workers formed a health and safety committee and pressed for an OSHA investigation. In April 1989, OSHA found the company guilty of toxic chemical violations and fined it $33,000. Even skeptical workers saw what organization could accomplish.

“Now they (management) are respecting people that’s in the union,” said Gloria Roberts, who stood up to her supervisor in the novelty trim department at Delila.

The workers have crossed the country on union-organized speaking trips. They have addressed a K-mart stockholders’ meeting (K-mart sells Samsons and Delila curtains) and have talked with TV audiences and congressmen. A trip to Washington led Congressional Black Caucus leaders to initiate a Federal Contract Compliance investigation of the two Lichtenberg plants. A Citizens’ Commission on Justice at Samsons and Delila, formed last spring, includes Rev. Jesse Jackson, Dr. Benjamin Hooks of the NAACP, and Dr. Joseph Lowery of the Southern Christian Leadership Conference.

Winning support back home has sometimes been a struggle. Lichtenberg influence extends to local banks and stores. “Some of them will whisper to you, telling you, ‘Go for it’–but they are scared to speak out,” said Catherine Wilson.

Unemployment is high here, and some people fear unions will keep out needed jobs. But the workers say there’s no future in serving as cheap labor for outside industry. “They come down here and do us like dogs, and they go back up north and boast and brag and flash that money in the bank,” said Barbara Lewis, fired by Delila for union activity. “If you aren’t gonna bother about treating us right, don’t bother coming in.”

African Americans have been the majority in this area for 200 years. The struggle for Black empowerment has borne fruit, including last January’s re-election of union supporter Mayor Emma Gresham in nearby Keysville.

As Barbara Lewis explained to Unity, “Now that we got the strength and see how good it feels to stand up for what you believe in, we’ll probably end up with some people from Delila in a City Council seat or the County Commission seat or Sheriff.”  She added, “It’s opening the doors all the way around.”

And Deloris Jenkins, who sews drapery panels at Samsons, said the union has “made a great difference in my life — a hallelujah difference.”