On February 17, over 300,000 students at the National Autonomous University of Mexico (UNAM) ended their strike, after winning a spectacular victory against restrictive educational reforms.

Unity asked Carlos Imaz, one of the University Student Council’s (CEU) negotiators with the administration, and Claudia Sheinbaum, a leader in the CEU, about the massive three-month-long mobilization and 20-day strike that made headlines around the world.

Claudia is a 24-year-old physics student. She is the science department representative in the CEU. She’s been active nine years, since high school. Carlos is a 27-year-old getting his masters in sociology. He became active when he began at the university. Claudia and Carlos worked together before in the Student Committee of Peasant-Worker Solidarity five years ago. 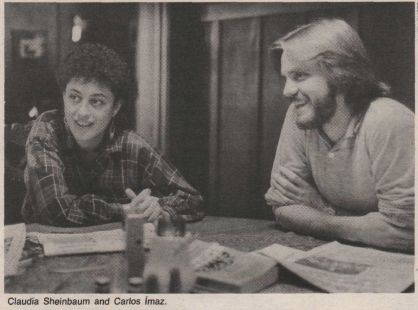 Does the current movement have links to the 1968 UNAM in which many students were killed at Tiatelolco?

Claudia: In the UNAM there hadn’t been any independent, fighting, democratic student organization since 1966-68. In one of the last marches during the strike, over 250,000 students and 50,000 other people took back Tlatelolco. We began our march at that same plaza where, in 1968, hundreds of students were killed for demanding a public dialogue, and the administration did not give in. We have now won a dialogue as well as the Congress (decision-making body made up of students, faculty and a minority of administrators — ed.).

How did your movement change society?

Carlos: In the period of crisis the country is going through, the only way to break with the apathy, fear and the general feeling of social immobility is to give hope for the future. Other social sectors will see that it is possible to struggle against the austerity policy and to win.

Carlos: At the high school level, the parents’ committees took a very active part. There were many meetings of 400-500 parents, which is of political significance. But there is an important cultural significance as well in terms of changes in family relationships.

Claudia: The creative and beautiful thing about this movement is that both men and women had political participation. There are men and women leaders.

Carlos: During this time, you could see the development of speakers, organizers, strategists. People who had never participated and would never have dreamt of doing so were suddenly and completely immersed in the work. This is a political experience that cannot be forgotten. In the preparatory high schools, 90% of the representatives are women. There are many neighborhood clubs, mostly male youths 16-17 years old, and there is a lot of competition among them. So the only ones who can give direction and resolve this are the women.

How was support built for the strike off campus?

What did you win, and how was the strike ended?

Carlos: We started the strike on January 29 with two main demands: the repeal of the reforms, which included the payment of tuition and exams; and the formation of a general University Congress with decision-making authority. The University Council met on February 10, and acting on the proposal of the Rector Jorge Carpizo, resolved that it will make the Congress’ decisions its own. They also agreed to suspend the reforms adopted on September 11-12, 1986.

We had intense discussions in the schools about whether this satisfied the demands that led to the strike.  We decided that  it was sufficient. We ended that strike on February 17 at  noon, at all schools. It was important for the CEU to end the strike in a uniform way.

The CEU believes that the movement has made a very significant advance, but that we should not be overconfident because it is a victory that can be stolen from us if we don’t preserve our organizations and political perspectives.

We decided that it was sufficient. We ended the strike on February 17 at noon, at all schools. It was important for the CEU to end the strike in a uniform way.

The CEU believes that the movement has made a very significant advance, but that we should not be overconfident because it is a victory I that can be stolen from us if we don’t preserve our organization and political perspectives.

What’s happening now that the strike is over?

We know that this task is not just the students’. We have to build unity with the democratic-minded professors and the UNAM Workers Union to forge a democratic trend in the university.

We are still discussing a second packet of demands. Because of the low budget, there are insufficient libraries, no cafeterias in the schools, and practically no student grants (263 grants for over 300,000 students). We have a long list of student demands to discuss.